Considering that journalists are already talking about a “Colbert primary” for 2020 Democrats, it’s pretty clear that the Late Show host has decided he’s now only talking to half the country. On Monday night, Stephen Colbert gushed over “media virtuoso” Alexandria Ocasio-Cortez, hyping that she doesn’t give a “f**k” about offending the establishment.

Noting that some Democrats have been less than thrilled with the antics of the millennial Congresswoman, Colbert cheered, “I want to ask this question in a respectful manner, knowing also that you’re from Queens, so, you’ll understand this question. On a scale from zero to some, how many [bleeped] do you give?”

The Democratic socialist replied, “I think it’s zero.” Although Ocasio-Cortez holds many radical opinions, Colbert portrayed one of them, a call for a return to the 70 percent tax rate, as only slightly unconventional:

Earlier, he hyped, “So you have been called a media virtuoso.”

This is the same guy who asked 2020 Democrat Kamala Harris, “What makes you happy? Where does your hope come from?” He held hands with another presidential contender, Kirsten Gillibrand, wondering, Do you have anything to announce?” (Gillibrand made her 2020 bid official on the show.)

It would be one thing if Colbert was soft on everyone. But on election night 2018 his show repeatedly called Republicans racists. He cursed out the non-political actor Kevin Hart, demanding more apologies for years-old tweets. 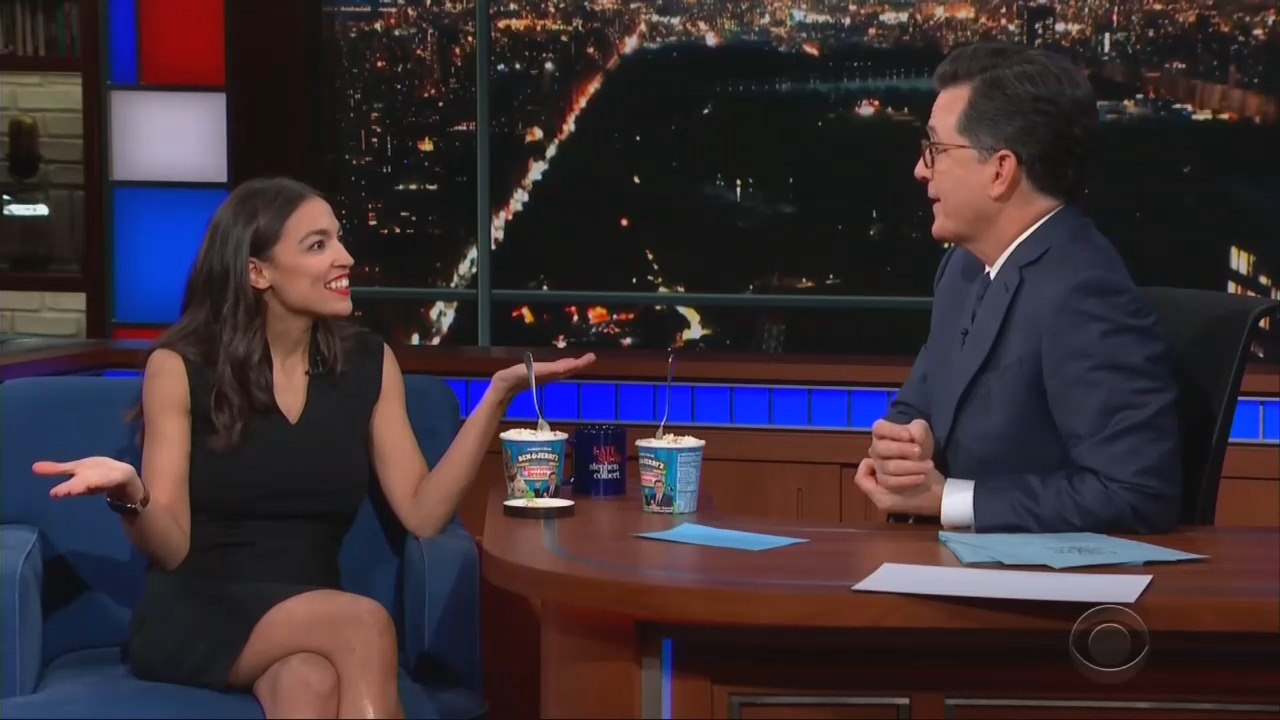 STEPHEN COLBERT: My first guest tonight  made history this fall as the youngest woman ever elected to the House of representatives. Please welcome back to the Late Show, now congresswoman Alexandria Ocasio-Cortez!

COLBERT: [When being sworn in] I understand Sotomayor was a bit of an inspiration for you. In what way?

COLBERT: You get elected. You go in there. Your first day in Congress, government is shut down. What the — What the heck is that like?

COLBERT: So you have been called a media virtuoso. Okay? People compared to the other members of Congress, certainly some of them. As I was saying, you had a little lesson to teach other members of the Democratic Party to catch them up on social media. What were the less subpoenas like? Was it like the power button is the thing to — What were you teaching them?

ALEXANDRIA OCASIO-CORTEZ: So, I give them more of my general theory and approach to social media. I said, rule number one is to be authentic.

COLBERT: You've had a good record of responding to people who are criticizing you on social media. How do you choose who you go give the business to? Because no free rides. Some people might be coming after you for attention.

COLBERT: We're back here with Alexandria Ocasio-Cortez, the new congresswoman from Queens. Now, Congresswoman, for you and other freshmen members of Congress, you're getting a fair amount of push back, privately and publicly, from more established members even of your own party saying, “Wait your turn. Go slow. Don't ask for so much so fast right now. You're new, wait your turn for everything and don't make waves.” I want to ask this question in a respectful manner, knowing also that you’re from Queens, so, you’ll understand this question. On a scale from zero to some, how many [bleeped] do you give?

COLBERT: I got to get into one policy issue with you here. You have proposed a 70 percent tax on rich folks. Now, I have no dog in this fight. I’m just curious: How would that work and I just want to say, “Yay.” What if some of the money is in the Cayman Islands? How would that work?