Despite promising that correspondent Oprah Winfrey was “stepping away” from the network due to her active campaigning for Democrats, CBS allowed Winfrey back on This Morning, Wednesday, to promote Michelle Obama’s new book. In total, Democrat Winfrey and Democratic donor/co-host Gayle King have devoted 22 minutes and 44 seconds (since Monday) to the former First Lady’s new book, Becoming.

King, who has vacationed with the Obamas, began the first of three segments on Wednesday by worrying about how Donald Trump makes Mrs. Obama feel: “Former First Lady Michelle Obama is opening up about what it was like for her family to leave the White House after the election of President Trump.” King complained, “It seems that whatever the Obama administration has done, it seems the current administration wants to undo. How do you handle that when you look at the work that you all have done?”

Naturally, King asked Obama no tough questions. Instead, she gushed, “Listen, [Mrs. Obama] just still remains a class act. And every where I went.... people would say, ‘Ask her to run! Ask her to run!’”

Later in the show, CBS featured Winfrey for segment #2. The talk show host admitted this about her new book club selection: “I love a good book. And I almost doesn't choose that this one just because everybody would say, ‘Oh, yeah, of course you're choosing that book because Michelle Obama's your friend.’”

Actually, people might wonder about the fact that two Democratic friends/journalists got to interview the Democratic politicians they have supported and vacationed with.

In segment number three, the book promotion continued as King talked to Mrs. Obama and her mom:

Michelle Obama says it was never easy being the wife of a driven politician. The demands of campaigning and politics strained their marriage and she says they sought help in couples therapy.

A partial transcript of the first segment is below. Click “expand” to read more. 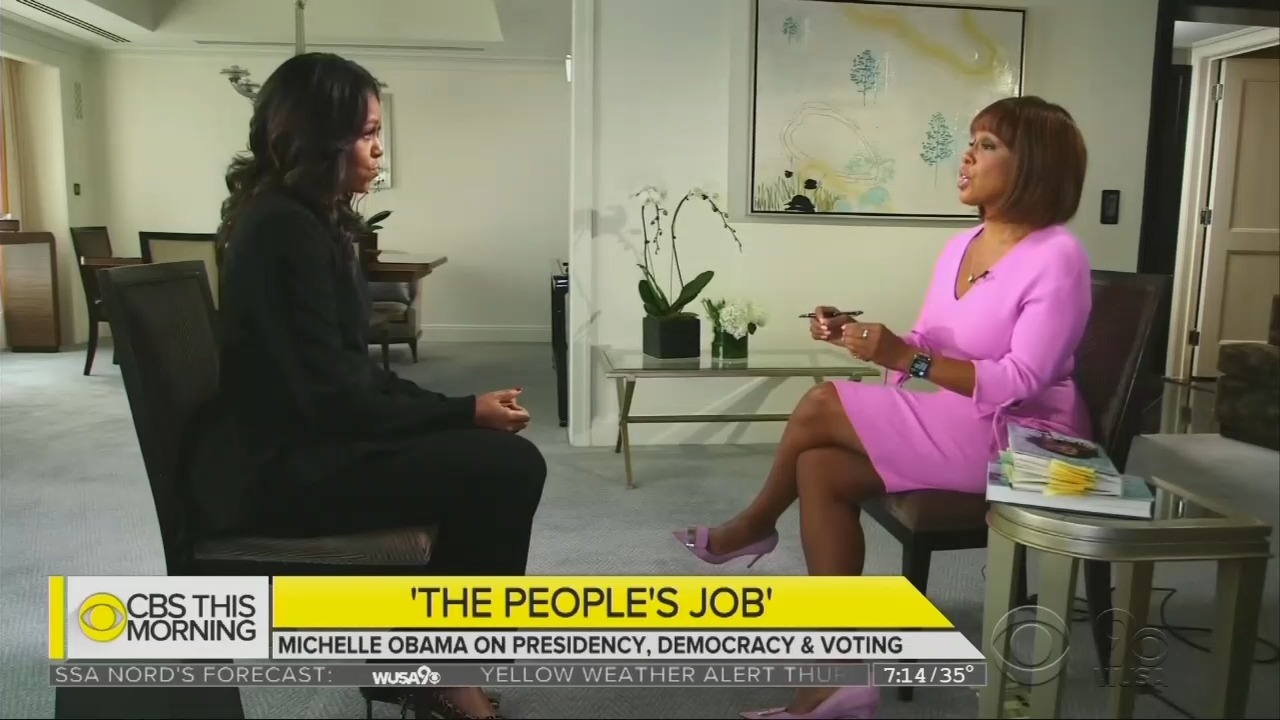 GAYLE KING: Former First Lady Michelle Obama is opening up about what it was like for her family to leave the White House after the election of President Trump. Her memoir, Becoming, which went on sale yesterday is already a bestseller. In it, the former First Lady details her very unlikely path from growing up in a very small apartment in Chicago's south side to living at the most famous address in the country, 1600 Pennsylvania Avenue. We spoke with Mrs. Obama in Chicago about her book and asked about the current state of American politics. It seems that whatever the Obama administration has done, it seems the current administration wants to undo. How do you handle that when you look at the work that you all have done?

MICHELLE OBAMA: You know, the truth is the presidency isn’t ours to own.

KING: Why do you think Donald Trump won this election? You probably don’t spend much time thinking about it.

KING: Do you still believe when they go low we go high?

KING: After all that has happened?

OBAMA: Absolutely. You know, what's the alternative, you know?

KING: You end your book with let's let kindness in. You still feel optimistic about our country and we as a people and we as a  nation?

KING: Listen, she just still remains a class act. And every where I went, I was now carrying the book around because now you can say we have it. People would say, “Ask her to run! Ask her to run!” And that's the one question did I ask her because I know she's sick of it and she said it's not going to happen. She said I lived that life for eight years and that's noting some that interests her.

O’DONNELL: It's nice to hear that each of her thoughts is value based. You know what I mean?

O’DONNELL: That it's solution focused. It's not an emotional,  make you feel better in the moment as she said. Everything's solution focused, how to be a leader, how to set an example and I know we'll hear more of your interview.

BIANNA GOLODRYGA: And she summed it up well by saying the presidency doesn't belong to them. It belongs to the American people.

KING: I thought that was a good answer.