CBS This Morning co-hosts on Monday fawned over the new president of Planned Parenthood, cheering “yay!” that she appeared on the show. The hosts also lamented that the organization, responsible for three million abortions, had been “politicized.” The journalists allowed Dr. Leana Wen to repeat the mostly bogus claim that the abortion provider offers “cancer screenings.”

Perhaps it didn’t occur to King that Planned Parenthood has always been controversial and political. Instead, the journalists offered no correction when Wen insisted the organization is “there for women across the country to provide cancer screenings.”

The myth that Planned Parenthood actually offers mammogram X-rays to patients has been long debunked, and needs to stop being repeated. Planned Parenthood does not administer mammograms, but it keeps being perpetuated by the group’s supporters, including celebrities whose claims have a wide reach.

While the group does provide Pap and HPV tests, it definitely doesn’t do mammograms and CBS should have called out the Planned Parenthood president.

Rather than fact check, co-host Bianna Golodryga worried about the “grudge” Donald Trump might hold against Wen:

Well, it is your first day at the job, but you are familiar with the Trump administration. As health commissioner of Baltimore, you've sued this administration twice and won. Given that this is a president who seems to hold grudges and has personal reactions to people directly, how do you plan open working with this administration going forward?

How bad was CBS? The tweet promoting the segment sounded more like a press release for the group: 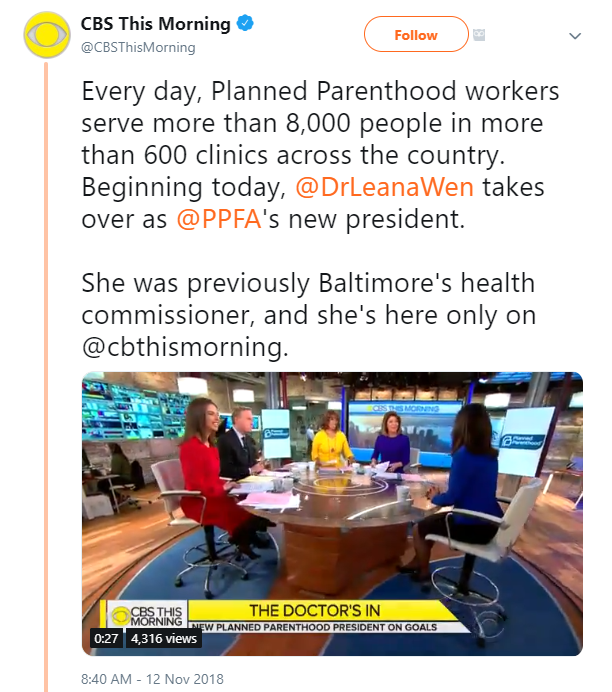 NORAH O’DONNELL: Every day Planned Parenthood workers serve more than 8,000 people in more than 600 clinics across the country. In 2016, nearly two and a half million people turned to the organization for health care. This came amid increased scrutiny of its leadership in the political arena. Beginning today, those responsibilities fall to Leana Wen who takes over as Planned Parenthood’s new president. She was previously Baltimore’s health commissioner and she’s here only on CBS This Morning. Good Morning, doctor. How are you?

GAYLE KING: And you are with us. Yay!

O’DONNELL: So you're the first doctor to lead this organization in half a century. What do you plan to bring to the organization from your background?

WEN: Well, this is deeply personal to me. I was a patient of Planned Parenthood and so was my mother and my sister. Just like one in five women in America. And as a doctor, I'm proud to lead our organization as we deliver lifesaving care to two and a half million people every year.

O’DONNELL: Why did your family use Planned Parenthood?

WEN: When we first came to this country, my mother didn't have health care anywhere else. And Planned Parenthood was there for her just like it's there for women across the country to provide cancer screenings, to provide birth control. We do more to prevent unintended pregnancies every year than any other organization.

WEN: Being a parent has clarified my values. And what I want to do is to shape the future for my son Eli. And it's a future where all people are treated the same, that all people have the right to health care. And where it's a society where we trust women and we trust all people to make the best decisions for themselves and their bodies.

KING: So were you encouraged after the elections?

WEN: Yes and no. On the one hand, we saw people rise up, women, people of color, rise up to speak in favor of reproductive rights and access to health care. But on the other hand, less than 24 hours after the election, the Trump administration came out with new rules that would prevent employers or that would allow employers to deny women birth control coverage. I can't believe it's 2018 and we're still debating birth control. Imagine if we're having the same conversation about vasectomies or about insulin. Women's health care is health care and health care shouldn't be political.

BIANNA GOLODRYGA: Well, it is your first day at the job, but you are familiar with the trump administration. As health commissioner of Baltimore, you've sued this administration twice and won. Given that this is a president who seems to hold grudges and has personal reactions to people directly, how do you plan open working with this administration going forward?

WEN: I come to this work as a doctor and not a politician. I'll work with anyone who wants to expand access to health care. For me, it's deeply personal. I treated a woman who waited more than a year before she had a lump in her breast examined. And by the time she got treated, it was too late. She had metastatic cancer and she died not long after I saw her, leaving behind three young children. For me, that's what it's about. It's about saving people's lives. That's the work that we've done at Planned Parenthood for over 100 years. And I'm proud to keep on providing health care and protecting access to that care.

WEN: I respect each person's beliefs for themselves. My problem is if they want to impose their own beliefs on other people. As a physician, I trust my patients. My job is to give medically accurate information to my patients and allow them to make the best choices about their health. I don't think that politicians have any role to play in the exam room in determining people's personal medical decisions. I trust women.

O’DONNELL: Let's talk about what's been happening at the ballot box in the midterm elections. You had seven more governors who are pro-abortion rights were elected but there were also anti-abortion measures that passed in the states of Alabama and West Virginia, Alabama specifically became the first state in the nation to enact what opponents call a personhood clause in its constitution. West Virginia became the first state to approve a measure stripping the state constitution of any abortion rights restrictions, including an issue about Medicaid funding. What's happening in the states?

WEN: We're seeing mixed results. And we are seeing people rise up in record numbers in favor of women's health care. We have more than 25 governors now who are pro women's health. We're also seeing solidly red states like Utah, Idaho, and Nebraska vote in favor of Medicaid expansion. I think that indicates that people want more  health care. Not less. And I strongly believe as a physician that health care has to be a fundamental human right and that women’s health care is health care.

O’DONNELL: So, is this argument that Roe vs. Wade is going to be overturned, is that hyperbole?

WEN: There's a very real likelihood that Roe vs. Wade could be overturned in this Supreme Court, which would leave 25 women, which is a third of women of reproductive age in this country without access to reproduction rights.

O’DONNELL: Not Roe vs. Wade itself, but essentially some other case that comes through that restricts abortion rights?

WEN: There are 15 cases right now that are just one step away from the Supreme Court. And in the last seven years there have been 400 laws passed in different states that directly restrict women's access. And I'm deeply concerned about this from a public health perspective.

KING: Well your first day on the job, you've got a lot of work to do it seems.

KING: I can tell. Thank you for coming.