All three networks on Tuesday touted LeBron James attacking Donald Trump in a new CNN interview. But ABC hinted that the NBA star should repeat his 2016 performance when he endorsed Hillary Clinton. ESPN’s Rachel Nichols talked to James on Good Morning America. She pressed: “Can we expect you to be active going up to the next election like you were in the last one?”

The basketball player joked, “I'm here. I already got my suit.” GMA reporter Gio Benitez hinted: “Nichols went on to say athletes have run for office before and suggested the school give him some public policy experience.”

One can assume that any political run by LeBron James will be treated differently than how journalists reacted to Trump’s announcement.

Over on NBC’s Today, reporter Gadi Schwartz highlighted James saying he would never talk to the President: “[James] doesn’t hesitate when asked what he would say if President Trump was sitting across the table from him.” The journalist then played a clip from CNN:

LEBRON JAMES: I would never sit across the table from him.

DON LEMON: Never? You don't want to talk to him?

A transcript of the GMA segment is below. Click “expand” to read more: 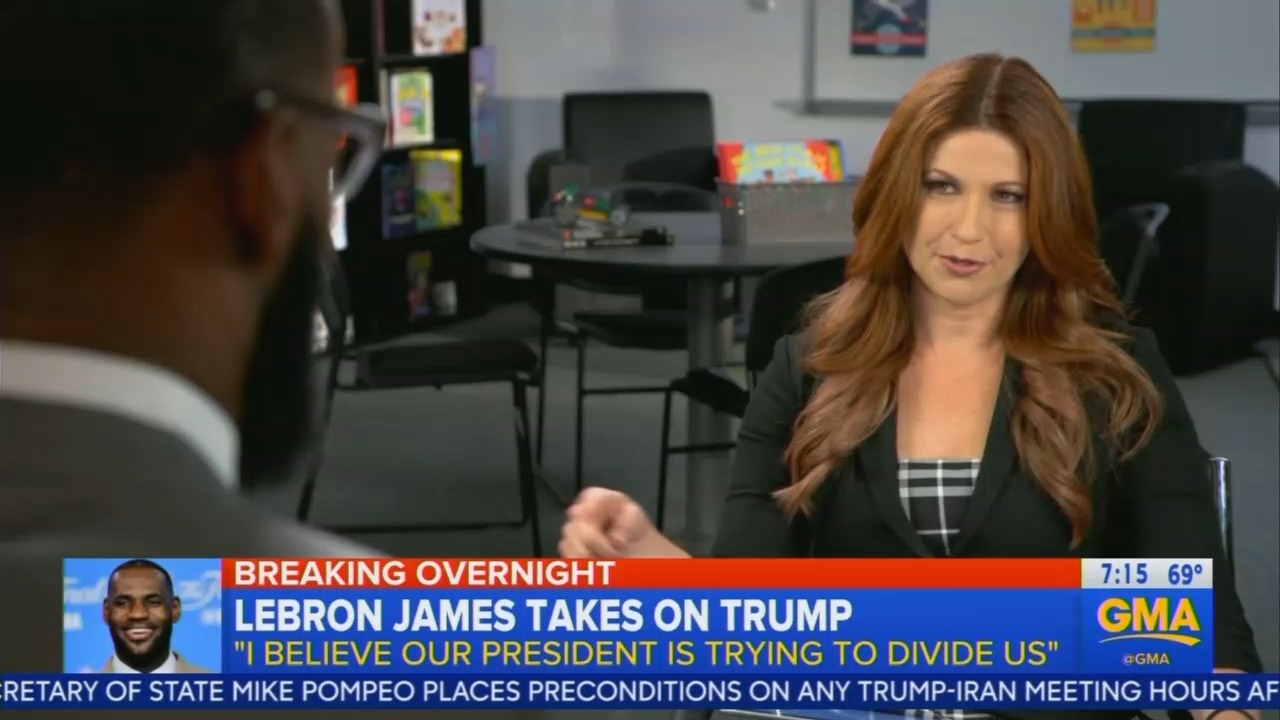 GIO BENITEZ: Hey, Robin. Good morning. He made the comments wile sitting down in an interview about his new I Promise school for at risk kids in Ohio. Don Lemon asking James about balancing athletics with the core subjects like with math and science and that's when James took on the President. Overnight LeBron James accusing President Trump of trying to divide Americans.

LEBRON JAMES: I believe our President is kind of trying to divide us. But I think —

JAMES: Yeah. He is. I don't want to say kind of. He's dividing us and what I noticed over the last few months that he's kind of used sport to kind of divide us and that's something that I can't relate to.

BENITEZ: James telling CNN that sports should help bring us together.

BENITEZ: James has been a vocal critics of the President in the past which prompted this reaction from Laura Ingraham this past February.

LAURA INGRAHAM:  Keep the political commentary to yourself or as someone once said shut up and dribble.

BENITEZ: ESPN's Rachel Nichols sat down with James at the school he just opened in Akron and asked why it was important for him to speak out about the President.

RACHEL NICHOLS: Can we expect you to be active going up to the next election like you were in the last one?

JAMES: I'm here. I already got my suit. I got my glasses.

BENITEZ: And Nichols went on to say athletes have run for office before and suggested the school give him some public policy experience. But James says, You know what, for now, he thinks he’ll stick to coaching and playing.