Meghan McCain Explodes at Behar: It's 'Dangerous' to 'Normalize Socialism!'

View co-host Meghan McCain exploded at liberal talker Joy Behar on Tuesday, declaring it “dangerous” for the Democratic Party to be “normalizing” socialism. Discussing the rise of democratic socialist congressional candidate Alexandria Ocasio-Cortez, the token conservative attacked: “This makes my head explode!” She lambasted her liberal co-hosts, saying of higher taxes: “Everyone that goes on TV saying that it's good needs to start paying 90 percent in taxes!”

Highlighting disastrous socialist countries, McCain unleashed: “The problem with socialism, in the words of Margaret Thatcher, at a certain point you run out of spending other people's money. Venezuela was one of the richest countries in the world in the '70s. Now the average Venezuelan has lost 24 pounds because they're starving to death!”

As co-host Sunny Hostin explained what Ocasio-Cortez believes, Behar applauded things like “Medicare for all” and “immigration justice.” Getting angrier, McCain responded: “If you think the government is so good at spending money, look at the VA! This is dangerous! Dangerous!” 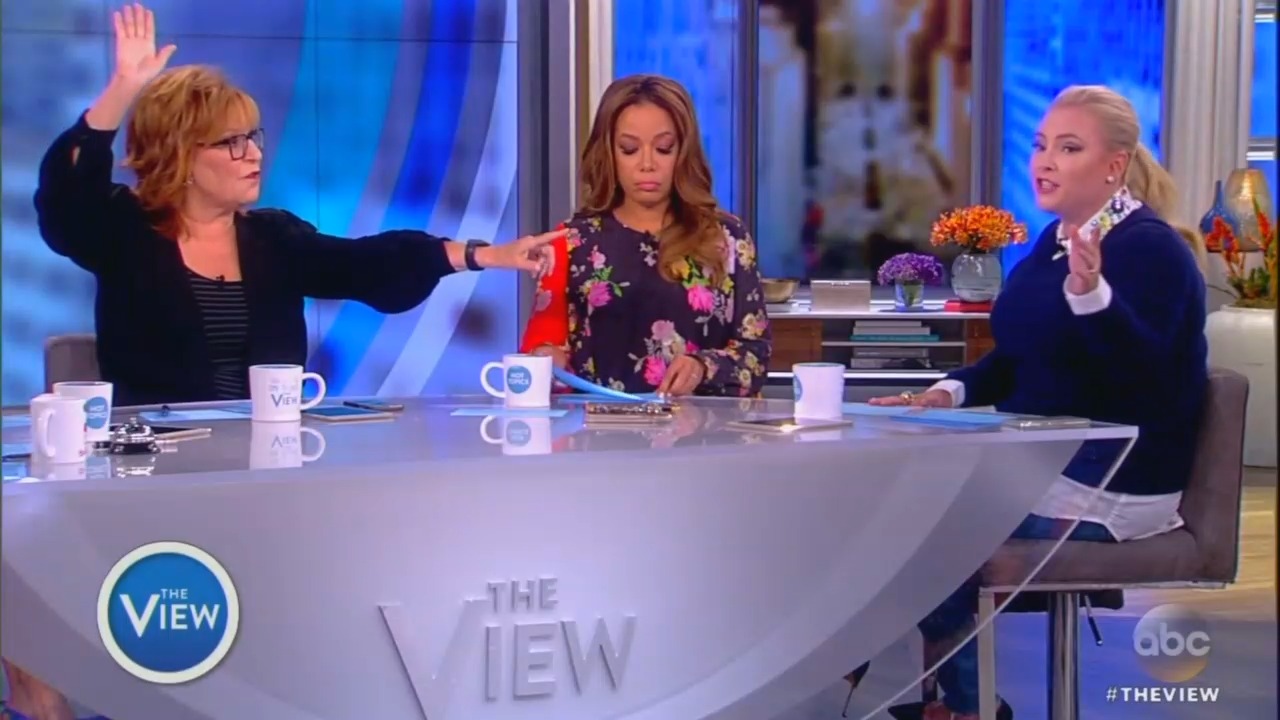 After Behar cited Sweden and Iceland as countries where socialism works, McCain shot back: “Comparing America to a small country in Europe is delusional! And I’m sorry, some of us do not want socialism to be normalized in this country!”

The situation got so out of control that Goldberg abruptly went to break as Behar and McCain continued fighting.

The View has a history of looking for moderate Republicans as their token conservative. But McCain is an example of a right-leaning co-host who won’t be bullied.

WHOOPI GOLDBERG: We were talking about Alexandria Ocasio-Cortez. She's one of the reasons that what is now being called democratic socialists are rising stars in the party.  I’m a little concerned about that. Because it’s my problem with Bernie Sanders. If you're a socialist, tell me that. Don't say that you're a Democrat. Clearly we don't have the same ideas of what should be happening if you were a Democrat. So, I wonder if this is now a splinter group, if anybody has discussed the difference between socialism and democratic — 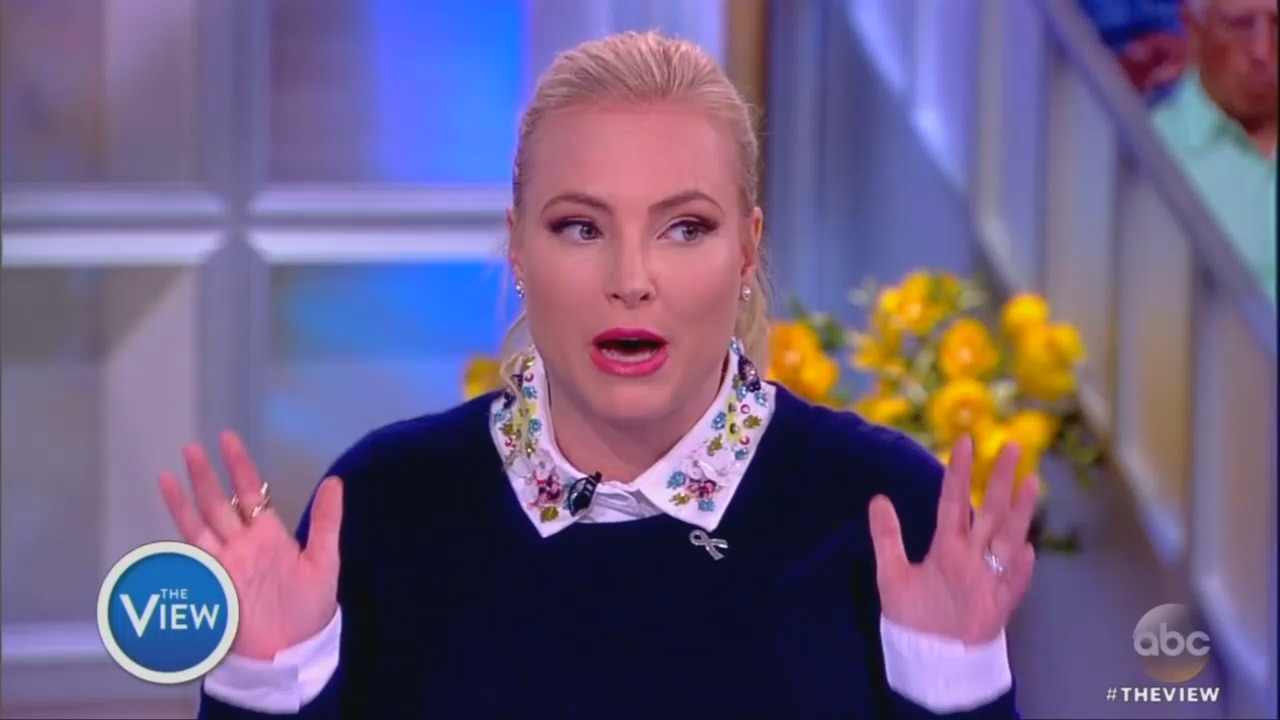 BEHAR: Think about it for a second. Medicare, Social Security, having garbage collection, the Post Office, the library. That’s all democratic socialism.

HOSTIN: We’ve had her on the show and I asked her this question. What do you mean by being a democratic socialist?

HOSTIN: She went over her platform. Medicare for all.

MCCAIN: Can I please push back on this? This makes my head explode. Which, by the way, I hope Democrats do run a democratic socialist campaign.

BEHAR: You hope we win? You hope the Democrats to beat Trump?

MCCAIN: No I think you'll look spectacularly. Then I’ll look forward to election night when I finally get to tell everyone I told you so if you run a radical. The problem with socialism, in the words of Margaret Thatcher, at a certain point you run out of spending other people's money. Venezuela one of the richest countries in the world in the ‘70s. Now the average Venezuelan has lost 24 pounds because they're starving to death. Ninety percent of the country is living in poverty.

BEHAR: I think she’s talking more about Scandinavia than Venezuela.

MCCAIN: I’m sorry, this is what I need from her: Name one country where socialism has ever worked.

MCCAIN: Everyone that goes on TV saying that it’s good needs to start paying 90 percent in taxes. On your tax form, I think you should start paying that every socialist in this country thinks you need to! Because if you think the government is so good at spending money, look at the VA! This is dangerous! Dangerous!

GOLDBERG: Hold on! God bless you all! [Hits a bell on the table.]

MCCAIN: I hate that bell!

GOLDBERG: I know you hate the bell! Then everyone stop talking over each other and I won’t hit the bell.

MCCAIN: These are countries with a population of 300,000 people and in no way can it be related in any way comparably to the United States of America. I’m sorry. If you think it’s good, than you need to be paying the taxes of a socialist country. It petrifies me that this is being normalized!

BEHAR: So, you're saying you run out of people's money.

MCCAIN: I didn’t say that. She said that.

BEHAR: They have given this enormous tax break to the very very wealthy in the country. That tax break doesn’t have to be so generous to those really rich people. Does it? Because if you don't give that money to them, what happens to that money. Better schools. Better post offices. Better garbage pick ups. [ Cheers and applause ]

MCCAIN: If you think the government is so running at things — the Post Office is so great run business? The VA? I’m sorry, comparing America to a small country in Europe is delusional! And I’m sorry, some of us do not want socialism to be normalized in this country.

GOLDBERG [Cutting off McCain and Behar as they scream at each other]: We will be right back.