The New York Times seems conflicted about undercover exposes. When James O’Keefe secretly recorded Times journalists admitting their own bias, the paper’s editor fumed over this “mortal sin” against journalism. But the Times on Monday appeared fascinated by liberal comedian Sasha Baron Cohen’s hoax interviews, deeming them as efforts to “reveal a truth.”

Times writer Sopan Deb on Monday contrasted O’Keefe with this headline: “Sacha Baron Cohen Is Duping Republicans. Is He the James O’Keefe of the Left?” Appearing on MSNBC, Deb cited another undercover comic and declared: “Look, whether, you know, intent matters and in this particular case if you were revealing a truth that is indicative of what is really happening.”

The MSNBC hosts played a clip of Cohen on his Showtime program talking to racists who condemned African Americans and Muslims. Deb insisted:

And those that cover the Trump campaign know that that particular segment you just heard, that exists. There are pockets of that throughout the country that have definitely coming to light in the last couple of years. 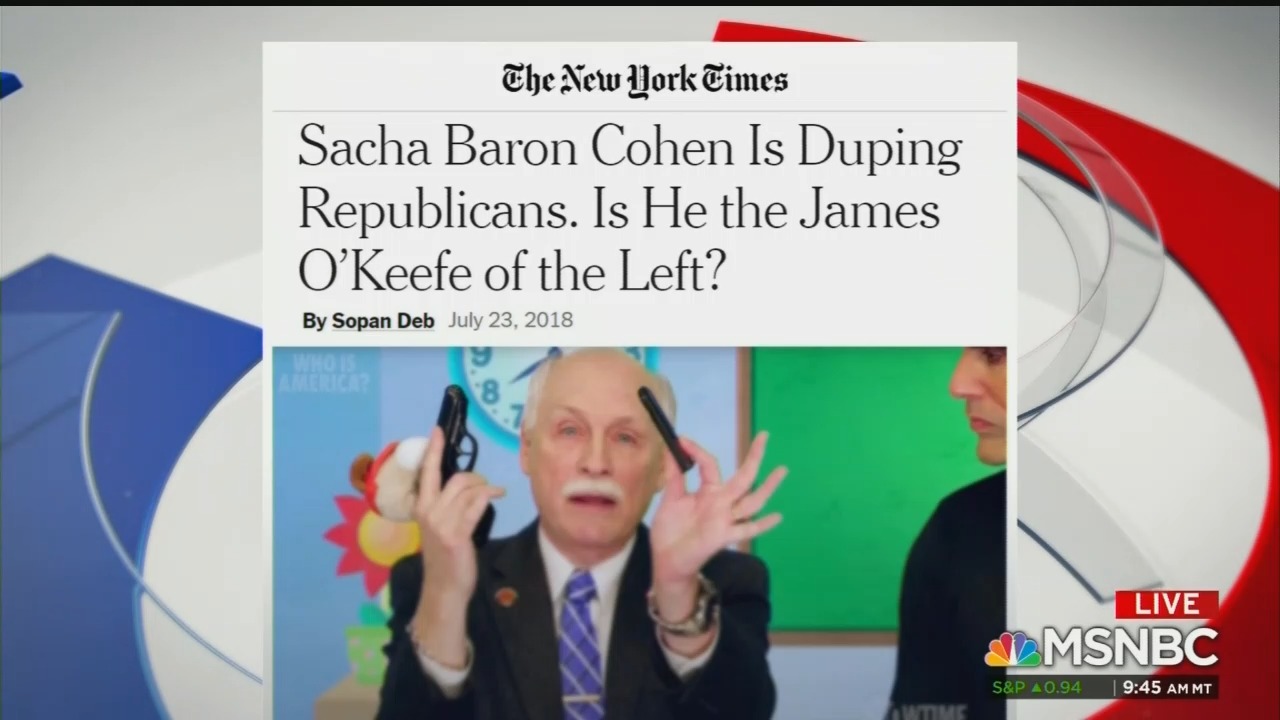 So if the motives are right, secret recordings are okay? That doesn’t seem to be the standard the Times had for O’Keefe. In July of 2017, the conservative posted secret video of one of the paper's journalists bragging about his connection to the Hillary Clinton campaign and saying of Trump: “I saw the threat and I was, like, ‘I want to do soemthing. I can’t just do what I do because, yeah, Trump was a threat... and is a threat.”

The Times’s executive editor reacted with rage... at O’Keefe. He called the undercover video “despicable” and a fumed: “Their sin was a mortal sin.”

In Deb’s article on Cohen, Monday, he only briefly mentioned O’Keefe’s expose of the Times and there was no acknowledgement  of the “mortal sin” quote:

Mr. O’Keefe’s undercover assistants also tried to strike up conversations with several New York Times journalists (this reporter believes he was one). One employee who was secretly recorded criticizing President Trump is no longer at The Times. 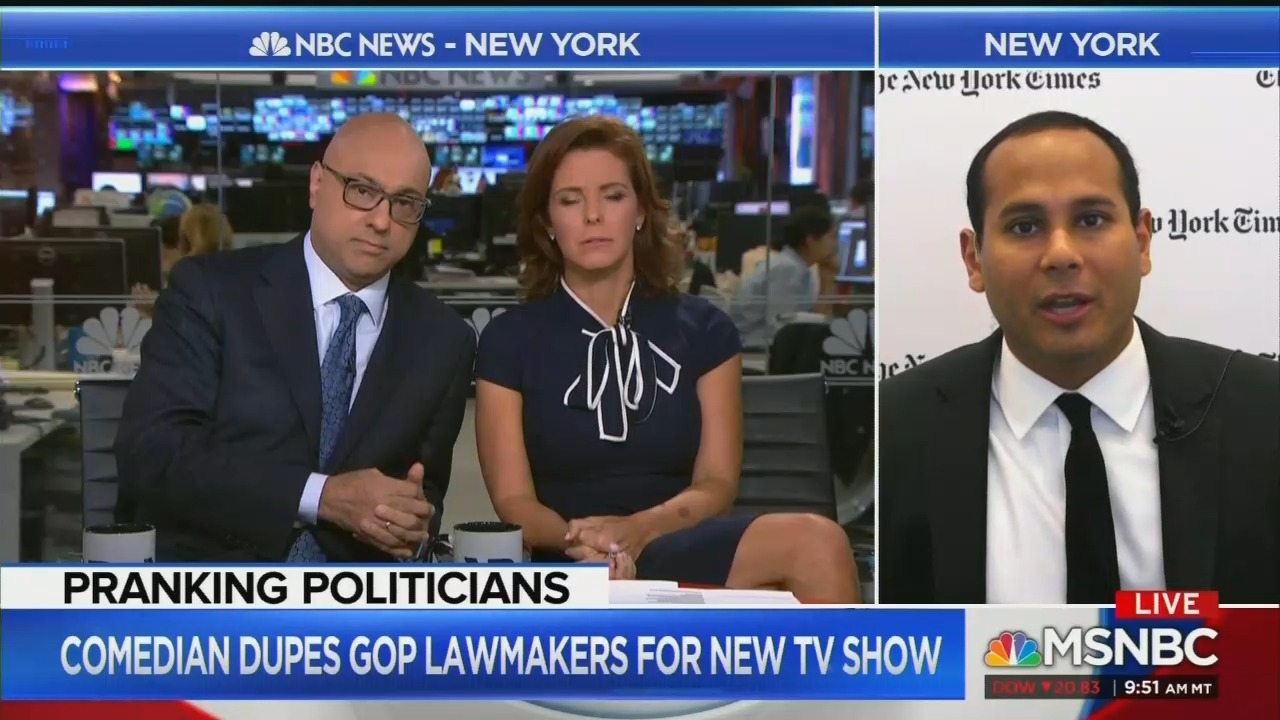 Deb quoted long time journalist Ted Koppel, a victim of Cohen, as a way of contrasting O’Keefe from the comedian:

Mr. O’Keefe also seems more interested in tearing down institutions than merely embarrassing them, as Mr. Koppel noted in a phone interview.

“On the one hand, I don’t want to be perceived as approving of what Mr. O’Keefe has done but at least he’s doing it for an ideological end,” Mr. Koppel said. “There’s a purpose to it other than getting a few giggles.”

On July 12, an ABC analyst refused to say if Cohen “crossed the line” by impersonating a veteran in order to smear Sarah Palin.

A partial transcript of the MSNBC segment is below:

ALI VELSHI: So, on one hand he's uncovering the truth. On the other hand he's being deceptive and he is being deceitful about it. What are we supposed to think about this?

SOPAN DEB (NYT Culture reporter): It's a very good question and something I thought a lot about. I was talking to Kobe Libby who was a correspondent on the Opposition with Jordan Klepper and he has interviewed people in character quite often. He said to me, “Look, whether, you know, intent matters and in this particular case if you were revealing a truth that is indicative of what is really happening. And those that cover the Trump campaign know that that particular segment you just heard, that exists. There are pockets of that throughout the country that have definitely coming to light in the last couple of years.

STEPHANIE RUHLE: Is it comedy or is it gotcha interviewing journalism? Because that's --

DEB: Well, I would say in the case of Sasha Baron Cohen —  I don't speak for him —  but he's trying to go for the laugh first but also make a political point. Again, he doesn't talk much about his process. In fact, that's something that he, you know, really resists talking about. He doesn't do many interviews out of character. But it's a good question for Sasha Baron Cohen.