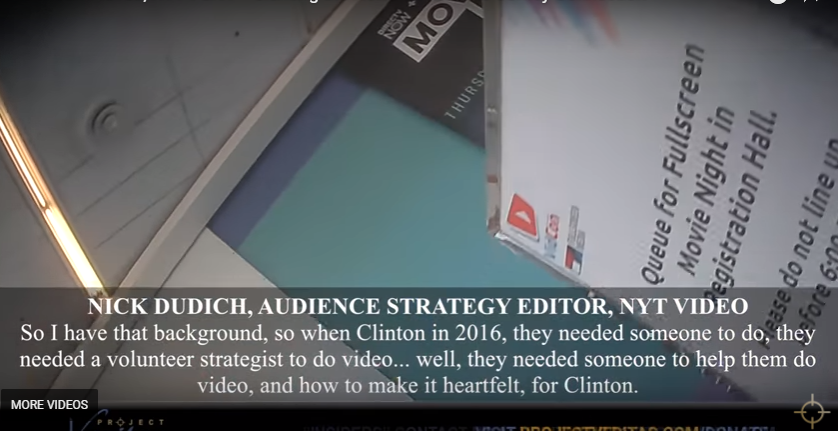 Dudich, who O'Keefe cites as the audience strategy editor for NYT Video, explained his previous advocacy for the Hillary Clinton campaign: “So I have that background, so when Clinton in 2016... they needed a volunteer strategist to do video... well, they needed someone to help them do video, and how to make it heartfelt, for Clinton.”

Blurring the line between journalist and activist, he added, “Like, after the Clinton campaign, I'm like, no I need to get back into news and keep doing shit because, like, this isn't going to change.”

Unaware that he was being recorded, Dudich said of Trump, “I saw the threat and I was, like, ‘I want to do soemthing. I can’t just do what I do because, yeah, Trump was a threat... and is a threat.”

The Times employee told Project Veritas that he’s a “gatekeeper” at the paper and bragged, “My imprint is on every video we do.”

The New York Times on Thursday responded to the Project Veritas video and described Dudich as basically someone exaggerating his role and power at the paper:

Based on what we’ve seen in the Project Veritas video, it appears that a recent hire in a junior position violated our ethical standards and misrepresented his role. In his role at The Times, he was responsible for posting already published video on other platforms and was never involved in the creation or editing of Times videos. We are reviewing the situation now.