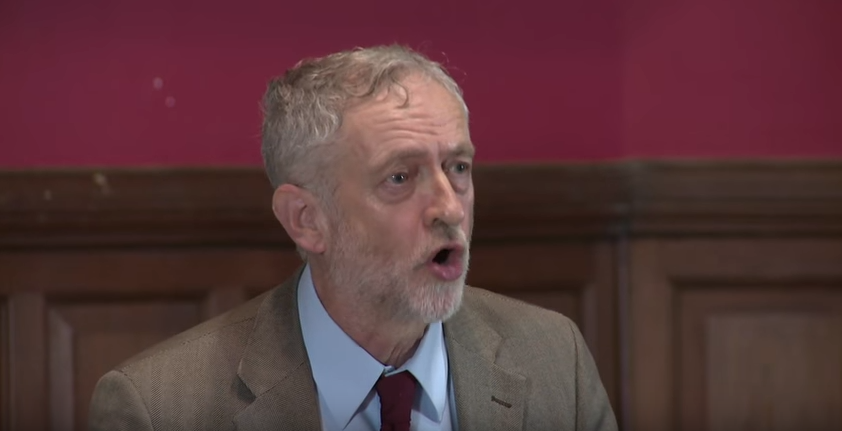 A major European political leader has been slammed by his own party as an “anti-Semitic racist.” So far, the networks and cable channels have ignored the public fight in Britain’s Labour Party over how to define bigotry against Jews. In the last few days, a senior Labour Member of Parliament, John Woodcock, quit the party as another, Margaret Hodge, is facing discipline for angrily confronting what she saw as Labour leader Jeremy Corbyn’s racism.

Given how interested journalists were last week in British politics, and that so many were just there for Trump’s meeting with Prime Minister Theresa May (who's leader of the Conservative Party), one would think they might notice. MP Hodge explained an angry outburst against the leader of her party:

On Tuesday, I confronted Jeremy Corbyn in parliament and told him to his face what I and many others are feeling. Under his leadership the Labour party is perceived by most Jews, thousands of party members and millions of members of the public as an antisemitic, and therefore racist, party. As our leader, he is now perceived by many as an antisemite.

My grandmother and my uncle were murdered by Hitler and many cousins were slaughtered in the gas chambers ... I joined the Labour party to fight racism. To find myself 50 years later, in 2018, confronting antisemitism in my own party is completely and utterly awful.

The response? A Corbyn spokesperson threatened Hodge and warned that “action will be taken” against her. Another Labour MP resigned the party and called the party leader a “clear risk to national security.”

Reuters covered Corbyn’s past problems with anti-Semitism and for spending Passover with an organization calling for the destruction of Israel. But the outlet skipped the latest problem. A Nexis search found AP has also ignored the allegations.

The Guardian explained how Corbyn’s Labour Party moved to water down the International Holocaust Remembrance Alliance’s definition of anti-Jewish bigotry:

For example, in the Labour code it is no longer likely to be antisemitic “to accuse Jewish citizens of being more loyal to Israel, or to the alleged priorities of Jews worldwide, than to the interests of their own nations”. The code simply says this is “wrong”, as if imprecise or uncivil language is the problem, rather than the prevalence of antisemitic attitudes. Yet this charge, that Jews cannot be trusted or must always be suspected of having a hidden agenda, is central to the old-fashioned, rightwing antisemitism that the Labour party claims to oppose.

Thus in today’s Labour party, it is possible to argue that Israel is a Nazi-like state that should be wiped from the map, and that any Jews who say otherwise are probably paid by Israel to do so, and not be hauled up for antisemitism. You may be told that your language is insensitive or impolite and asked to go on an education course, but your anti-racist reputation will remain intact.

In February, media outlets yawned at accusations that Corbyn, back in the ‘80s, was a commie stooge, being paid by Russian spies to pass information during the Cold War.

Liberal American journalists tend to ignore British politics, but offer liberal spin when they do cover stories. In June of 2016, when the country decided to leave the European Union, ABC, CBS and NBC exploded, demanding a “do-over” to “overturn” the “worst” decision.

One reason why this all matters: A poll last week saw Labour taking advantage of the country’s Brexit chaos, posting a five point lead over the rival Conservative Party. It’s not unreasonable to believe that Jeremy Corbyn could one day become Prime Minister. America would have to deal with this man and U.S. journalists should cover the story.