ABC on Friday breathlessly reported on the “bombshell” Inspector General report, but the network skipped a key section: The revelation that an FBI agent vowed to “stop” Donald Trump’s 2016 victory. Over on NBC, Chuck Todd insisted that the real victim of all of this was Hillary Clinton.

In the nearly three-minute segment, ABC’s Good Morning America never mentioned the names of FBI agents Peter Strzok and Lisa Page. In 2016, Page texted: “Trump's not ever going become president, right? Right?” Strzok texted back, “No. No, he’s not. We’ll stop it.” None of this came up on GMA.

Instead, chief Justice correspondent Pierre Thomas highlighted aspects of the report favorable to Clinton: “The Inspector General also found that Comey had used a personal e-mail account to conduct unclassified FBI business. This irony was not lost on Hillary Clinton who sarcastically tweeted ‘But my e-mails.’”

The Inspector General concludes former FBI director James Comey should have never held that press conference without telling his bosses at the Justice Department he was going to recommend that Hillary Clinton should not be charged in the e-mail probe.... The Inspector General called that decision extraordinary and insubordinate. At that infamous press conference Comey also criticized Clinton. 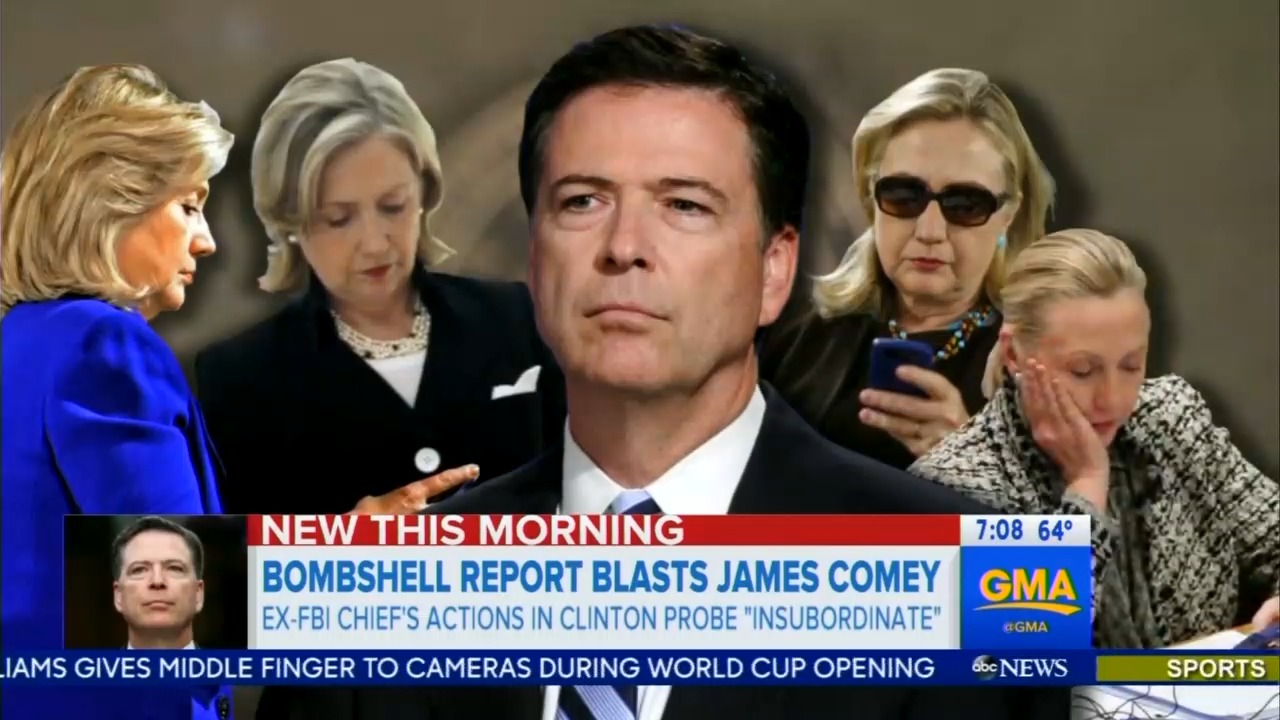 No quotes from the White House. No response from Trump.

One of the reports most eye-opening discoveries involves texts from two FBI officials in August 2016 a the FBI was launching its Russian meddling FBI investigation. FBI lawyer Lisa Page texted about Donald Trump: “He’s not ever going to become president, right? Right?” And Peter Strzok, a senior agent on the investigation responded, “No. No, he’s not. We’ll stop it.” 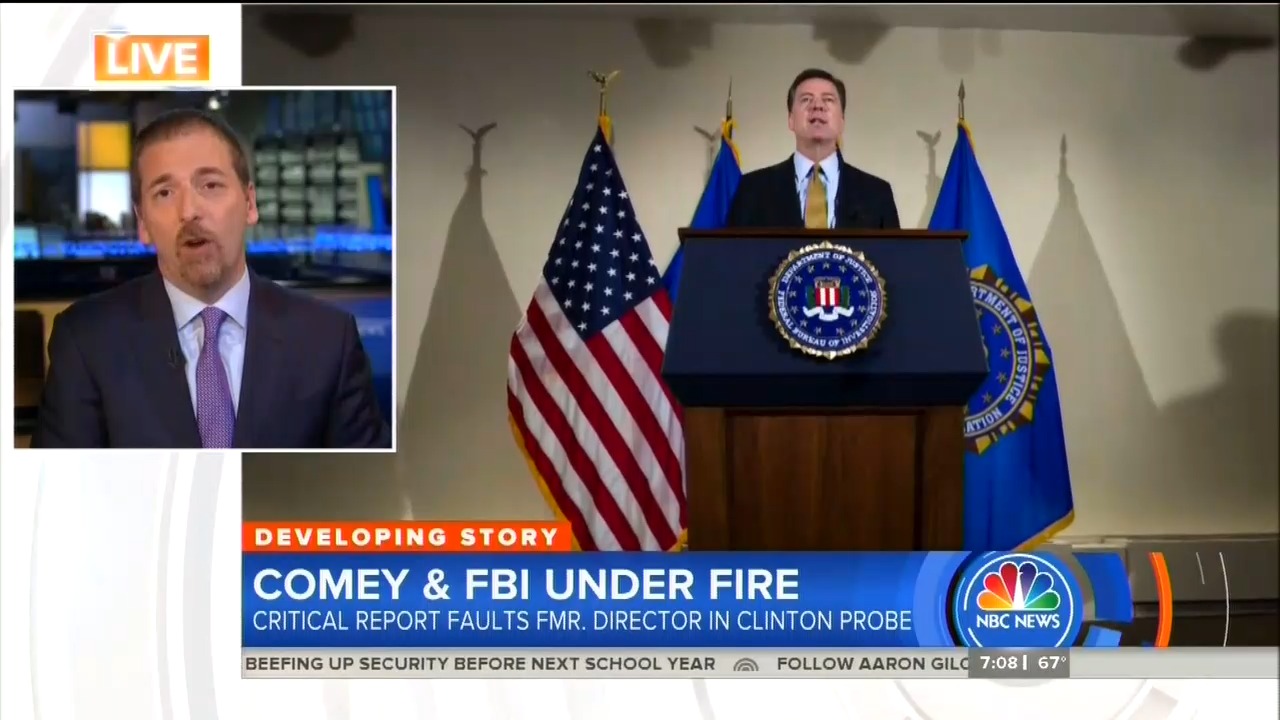 He quoted the report’s conclusion of Strzok: “We did not have confidence that Strzok’s decision was free from bias.” However, Meet the Press moderator Chuck Todd dismissed the idea that the IG report proves the case that the FBI was out to get him:

Oh, to that claim, I don’t think the report backs that up at all. If anything, it’s Hillary Clinton that should feel the most bitter about it this morning. This report seems to back up her claim that what James Comey did towards the end of election was unprecedented. And of course she believes, and she’s always believed it’s unfair. Now you have an IG report that says he was insubordinate in how he handled it and how he did it.

On CBS This Morning, Jeff Pegues also mentioned Strzok. Unlike ABC, he included a response from Trump: “And President Trump responded to the report this morning in a tweet saying about the text between Page and Strzok that, quote, 'doesn't get any lower than that.'”

None of the networks reported on the unidentified FBI agent who texted, “I can’t stop crying” the day after the 2016 presidential election.

A transcript of the ABC segment is below. Click “expand” to read more.

ROBACH: Now to that new report blasting fired FBI Director James Comey and his handling of the Clinton investigation calling his conduct insubordinate. Comey, at a Minnesota airport when the report was released, declining to comment but later writing in the New York Times that he respectfully disagrees. Our chief justice correspondent Pierre Thomas has more on this story. Good morning, Pierre.

PIERRE THOMAS: Amy, good morning. That report is searing and embarrassing for the Justice Department and the FBI. But new FBI director Chris Wray was adamant the mistakes did not change the outcome of investigations. He admitted though that the report requires all FBI employees to take a hard look at themselves. FBI director Christopher Wray acknowledging the blistering assessment of that new inspector general report.

CHRIS WRAY (FBI Director): The report does identify errors of judgment, violations of or, even disregard for, policy.

THOMAS: The Inspector General concludes former FBI director James Comey should have never held that press conference without telling his bosses at the Justice Department he was going to recommend that Hillary Clinton should not be charged in the e-mail probe.
JAMES COMEY: They do not know what I'm about to say.

COMEY: They were extremely careless.

THOMAS: Those comment, the report said, violated long-standing department practice of not criticizing suspects who are not charged. The Inspector General also found that Comey had used a personal e-mail account to conduct unclassified FBI business. This irony was not lost on Hillary Clinton who sarcastically tweeted “But my e-mails.”  And on Comey's decision to announce that he was re-opening the Clinton email probe just 11 days before the election, the former director is accused of rejecting long-standing department policy of not making announcements close to the end of election campaigns. Comey said he did the best he could, suggesting he was trying to avoid the appearance of bias.

COMEY: Given what I knew at the time, these were the decisions that were best calculated to  preserve the values of the institutions.

THOMAS: Comey responded to the report with that op-ed in today's New York Times, saying, quote, “I do not agree with all of the Inspector General's conclusions, but I respect the work of his office.” But he goes on to say, “Nothing in the report makes me think we did the wrong thing. Comey is standing by his decisions.” Amy, Comey is standing by his decisions.

ROBACH: He certainly is. Pierre, thanks so much.