MSNBC, the network where network journalists smeared opponents as evil killers, has now discovered decorum and “decency.” Anchor Katy Tur launched into a lecture on Monday about the cost of the Donald Trump presidency to America: “If there's one thing that's suffered because of Trump's campaign and now his presidency, it's decency.”

While talking about obviously inappropriate things said and done at Trump rallies in 2016, Tur declared: “Decency has been lost with Donald Trump's ascension.” Really? It was in 2016 that decency went down to defeat? This is the same network that employed Keith Olbermann from 2003 to 2011. During that time, Olbermannn accused George W. Bush of “murderous deceit” and told the then-President to “shut the hell up!”

Speaking of decency, it should also be pointed out that Tur dated Olbermann from 2006 until 2009 and she didn't seem to object to Olbermann's horrible comments. Later on Monday, Tur asked this loaded question to MSNBC journalist Ayman Mohyeldin about the new U.S. embassy in Jerusalem:

KATY TUR: Is peace possible with this administration, Ayman?

AYMAN MOHYELDIN: Look, that's a very difficult question for me to answer. But based on what we are seeing on the ground. If you ask the Palestinians, if you ask even the Palestinian Liberation Organization, which is a little different because they are the ones who actually entered into agreements with Israel, the short answer to that is no. 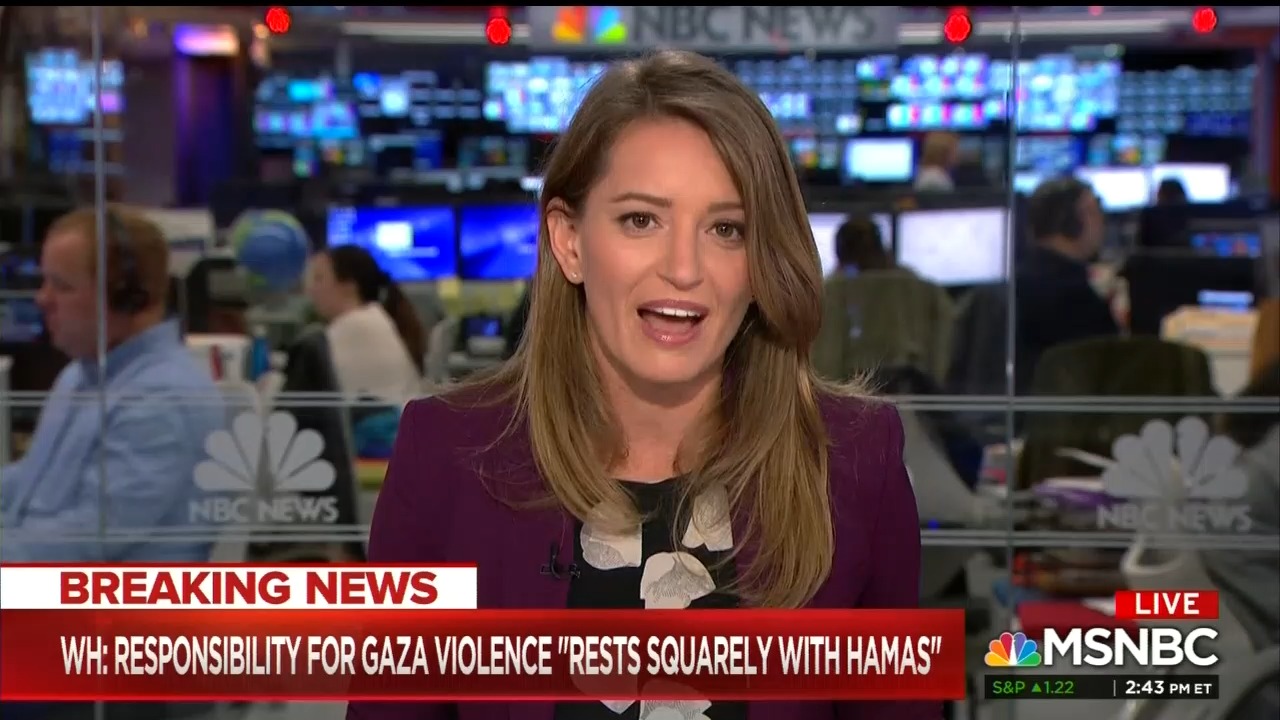 This is another example of how MSNBC shouldn’t be the judge of decency. Mohyeldin in 2015 slimed Chris Kyle, the real life American Sniper, as a “racist” who went on “killing sprees.”

Considering that TV personality Kathy Griffin showed severed head of Trump and in 2006 CNN promoted a faux documentary about the assassination of George W. Bush, perhaps journalists should be careful when calling out the indecent.

KATY TUR: Just one thing on the Kelly Sadler topic, If anything — not for nothing — what I've seen in the past two and a half years on campaign trail up until now, if one thing that's suffered because of Trump's campaign and now his presidency, it's decency. On the campaign trail I'd routinely see people say pretty terrible things about the opposing candidates or terrible things to the press. I saw men wearing shirts saying Hillary Clinton is a C- word. I heard a man say, "Assassinate that B,"but the actual word on Hillary Clinton in the middle of a Donald Trump rally, and nobody said, “Hey, maybe that's a little too much.” We routinely saw the President call out the press or tell protesters they should get out or supporters that if they punched protesters he would pay their legal bills.

Decency has been lost with Donald Trump's ascension. And he's been going after John McCain now for some time. This is a man that's dying of cancer and the White House refuses to apologize for what a White House advisor said.

AYMAN MOHYELDIN: I think a lot of Palestinians, a lot of international human rights organizations that have been documenting what’s been going on there on the ground in Gaza take great offense to a comment like that coming out of the White House. But it also really lifts the mask for Palestinians who may think that the Trump administration can maintain a semblance of balance and the American administration is somehow evenhanded. A lot of people will see that comment and say, “Look, this is a great example of how the administration is not a balanced and honest broker in this peace process.

TUR: Is peace possible with this administration, Ayman?

MOHYELDIN: Look, that's a very difficult question for me to answer. But based on what we are seeing on the ground. If you ask the Palestinians, if you ask even the Palestinian Liberation Organization, which is a little different because they are the ones who actually entered into agreements with Israel, the short answer to that is no. In fact, the official  statement that came out from the PLO Wednesday, excuse me, that came out yesterday on the events simply said that the American embassy move to Jerusalem is a full-fledged support of Israel now becoming an apartheid state. It also went on to say that this effectively ends America's role as an honest broker and potentially end a two-state solution. So, from a Palestinian perspective what we are seeing now is perhaps the most stark departure we have ever seen from them on the Palestinian/Israeli peace process.