Larry Kudlow Hits Back on Selective Polling About Tax Bill

Larry Kudlow on Tuesday made his first network TV appearance as a member of the Trump administration and fought back against selective polling when it comes to the Republican tax bill. CBS This Morning co-host Gayle King demanded: “Mr. Kudlow, the latest poll shows that only 27 percent of Americans think that this tax bill is a good idea. Is that a good enough number for you?”

After identifying the poll as from NBC News/Wall Street Journal, Kudlow shot back: “ So let me help you on the Wall Street Journal poll. They're friends of mine. But that poll did not ask any registered voters. Nor did it ask likely voters. So I got to say I'm not impressed with that.”

Indeed, Kudlow is correct that the aforementioned poll is of 900 adults. Not registered or likely voters. He added: “Most of the polls that I've shown show close to 50 percent support for tax cuts.” Indeed, on the same day, an Economist/YouGov poll found 41 percent support for the tax bill. That poll was of 1292 registered voters. 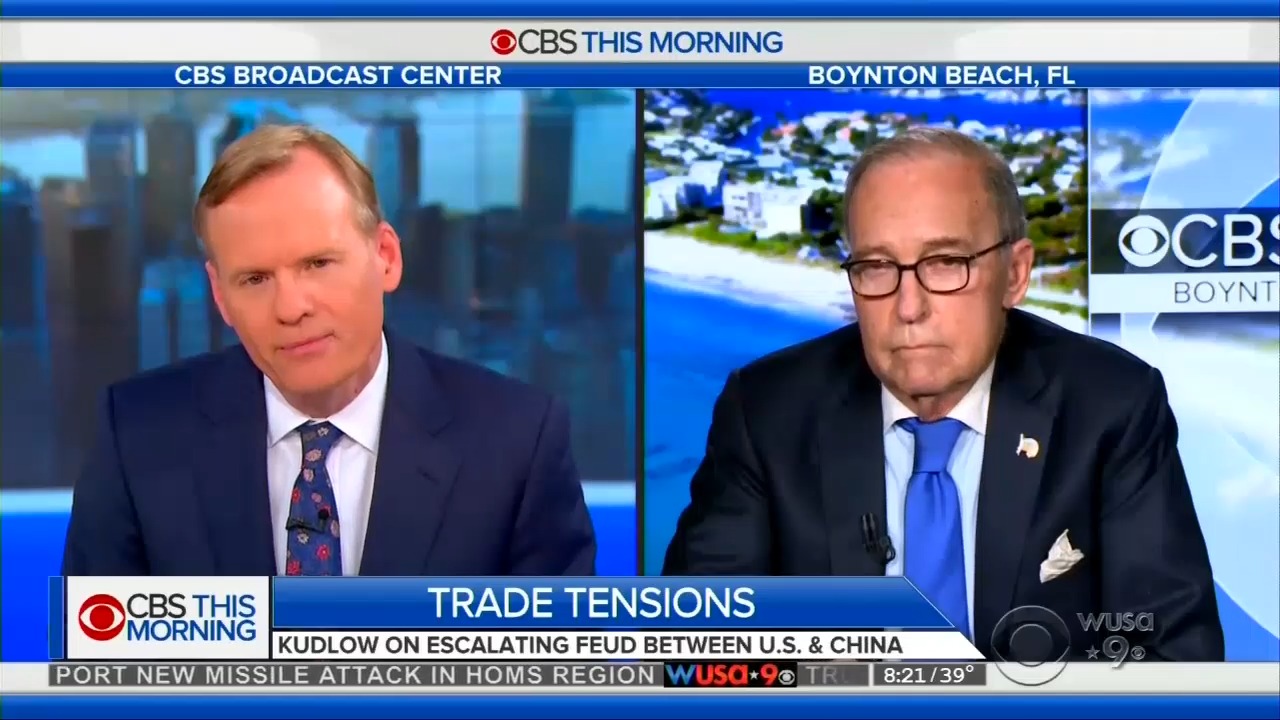 Kudlow added of the tax law:

With regard to the Gallup poll Kudlow mentioned, it found that after the tax law:

Americans are less likely today, than at any time since 2012, to say the federal income taxes they pay are too high. Currently, 45% hold this view, while 48% say their taxes are about right.

A transcript of the segment is below. Click “expand” for more.

GAYLE KING: President Trump says a new tax law is boosting the economy. He writes in this morning's USA Today: "On this tax day, America is strong and roaring back. Paychecks are climbing. The tax rates are going down, businesses are investing in our great country. And most important, the American people are winning."

JOHN DICKERSON: Larry Kudlow was appointed director of the National Economic Council last month. He'll be involved in the President's summit with Japan's prime minister at Mar-a-Lago that starts today. This is his first network TV interview as a part of the Trump administration. Larry Kudlow, good morning. Mr. Director, I want to start with —

DICKERSON: Mr. Director, I want to start with the question of the tax cut bill. When it first was passed, the White House put out announcements of all the bonuses that were being given out at companies. That seems to have slowed. Every dollar counts, but for the broad benefit across the economy, Bank of America and Merrill Lynch did a study and found that only 45 of the 500 companies in the S&P 500 have paid out cash bonuses. The rest have put them into stock buy backs and shareholder dividends. So, give us your take on how the tax cut is working its way into the economy.

KUDLOW: I think it's doing really well. I just want to make one point. Share buy backs in some cases. The biggest winner right now is business investment. That is huge. Equipment, technology, software, and so forth, factories. That's where the real nuts and bolts of this thing, the incentives at a lower business tax rate, both large and small. Now on the paycheck thing, look, the bonuses are one thing. And that was great. But don't forget, withholding rates are lower. And the bracket ceilings are higher. So that's a combination of fatter paychecks for every single working American. About 155 million people. So I think we're off to a great start.

DICKERSON: Let me ask you about China. Where do things stand? There's been talk of trade wars. Then some people have said, well, we're in kind of a negotiation stage here. Bring us up to date, will you?

KUDLOW: I'll try. Look, it's certainly not a trade war. I think of it as a trade dispute. I think both countries would like to settle this. President Trump is [sic] good relationship with President XI. President XI is a good, able negotiator. Look, everything's on the table. We can't let them keep stealing American technology. That's really the nub of this. That's what makes America the greatest economy, the most entrepreneurial economy. We can't let that happen. It's been going on for two decades.

That said, we'll see about the tariffs. We've made some proposals. Nothing has been enacted yet. I want to make that point, and probably won't be for several months. Perhaps the two sides will be able to talk it through. Let's see what happens. So far, though, the Chinese are coming back with more constructive reaction. So I'm optimistic about that, that we'll work things through.

KING: Mr. Kudlow, the latest poll shows that only 27 percent of Americans think that this tax bill is a good idea. Is that a good enough number for you?

KUDLOW: Which poll is that?

KUDLOW: Yeah. So let me help you on the Wall Street Journal poll. They're friends of mine. But that poll did not ask any registered voters. Nor did it ask likely voters. So I got to say I'm not impressed with that. Most of the polls that I've shown show close to 50 percent support for tax cuts. Mind you, we're just getting started. The paychecks and withholding rates, as I said earlier. You've got child tax credits you're doubling, the doubling of the standard deduction. You've got lower income tax rates. You've got lower business tax rates. I think it's a winner. I saw this morning Gallup poll. Gallup poll showed that only 45 percent of Americans now think they're taxed too much. That's the lowest number since the JFK 1960s. I think we're on the right track.

BIANNA GOLODRYG: Larry, it's good to see you. You're there in mar-a-lago for a meeting with Japanese prime minister Abe today. He's been one of the President's most ardent supporters since election. And yet, he hasn't been exempted from the steel and aluminum tariffs the way other U.S. allies have. I'm assuming he'll be asking for that today. Will the President deliver it to him?

KUDLOW: Well, I don't want to get ahead of my skis, as some people say. It's going to be on the table. There will be a lot of discussions here. Economic cooperation, trade cooperation, foreign policy cooperation. This will be part of the ongoing discussions. We'd like Japan to open up some markets and help us, particularly our agriculture sector. Japan is looking to coordinate and integrate better with the United States. So we'll see. It's a topic. I don't want to get ahead of the story. We'll see how this works out, how President Trump decides to play it.

GOLODRYGA: Are you advising him to do it, quickly in the last seconds here?

KUDLOW: I want a good, solid trade deal with Japan.

GOLODRYGA: Larry Kudlow, thank you so much.