CBS’s King to Ryan: I Feel Sad as You ‘Exclude’ Women and Minorities

CBS This Morning’s Gayle King on Thursday complained to Paul Ryan that he made her and other minorities feel “excluded” during his time as Speaker under Donald Trump. The co-host also slimed the Republican about “compromising” his personal integrity. King’s aggressive questioning is quite the contrast to her fawning interview with liberal Congressman Joe Kennedy III on Sunday. There, she hailed the “legendary,” “storied” Democrat and his family.

In the exclusive interview with Ryan, the Speaker touted his mentor, the late Jack Kemp. King sneered: “Your mentor Jack Kemp is very different from President Trump. Do you ever feel that you had to compromise your own personal values to play along to get along?” She also showed Ryan a picture of him, Mitch McConnell, Donald Trump and others to somehow paint the politician as sympathetic to bigotry:

When I look at that picture, Mr. Speaker, I have to say, I don't see anyone that looks like me, in terms of color or gender. And you were one of the main people that said you want to do more to expand, you wanted to expand the base. Some say this president really doesn’t want to expand the base. So, when I look at that picture, I have to say, I don’t feel very celebratory. I feel very excluded.

It was left to Ryan to tout his efforts at inclusion: “I don't like that you feel that way. And we need more minorities, more women in our party.” King, who donated $30,800 to the DNC in 2011, harassed the Speaker about not standing up to Trump:

Why didn't [you] stand up to the President about many things that were personally offensive to you? And if we had a different person in the White House, you would not be leaving.

This whole interview stands in stark contrast to King’s April 8 interview with Democratic Congressman Joe Kennedy III. There, the co-host sounded like she was reading liberal talking points: “[He] remains a rising star, in part because he seems to rise above the fray and in politics that could be worth everything.”

She even cited a former Democratic National Committee chair to hail his fellow Democrat as a potential president. At no time did King mention the Me Too movement or the Kennedy family’s long history of mistreating women.

A transcript of King’s questions can be found below. Click “expand” to read more:

BIANNA GOLODRYGA: But you can’t mess up the one and only Gayle King. She is in Washington, about to talk to House Speaker Paul Ryan. Looking forward to that. His decision not to seek reelection is sending Republicans scrambling ahead of November’s midterm ballot.

JOHN DICKERSON: Speaker Ryan joins a wave of Republicans who are not running again this fall. He's one of at  least 24 GOP House members who are retiring. Ryan says he is stepping down to spend more time with his family. He said he's tired of being, quote, “a weekend dad.” Gayle King is with Speaker Ryan in his office. Gayle, good morning again. 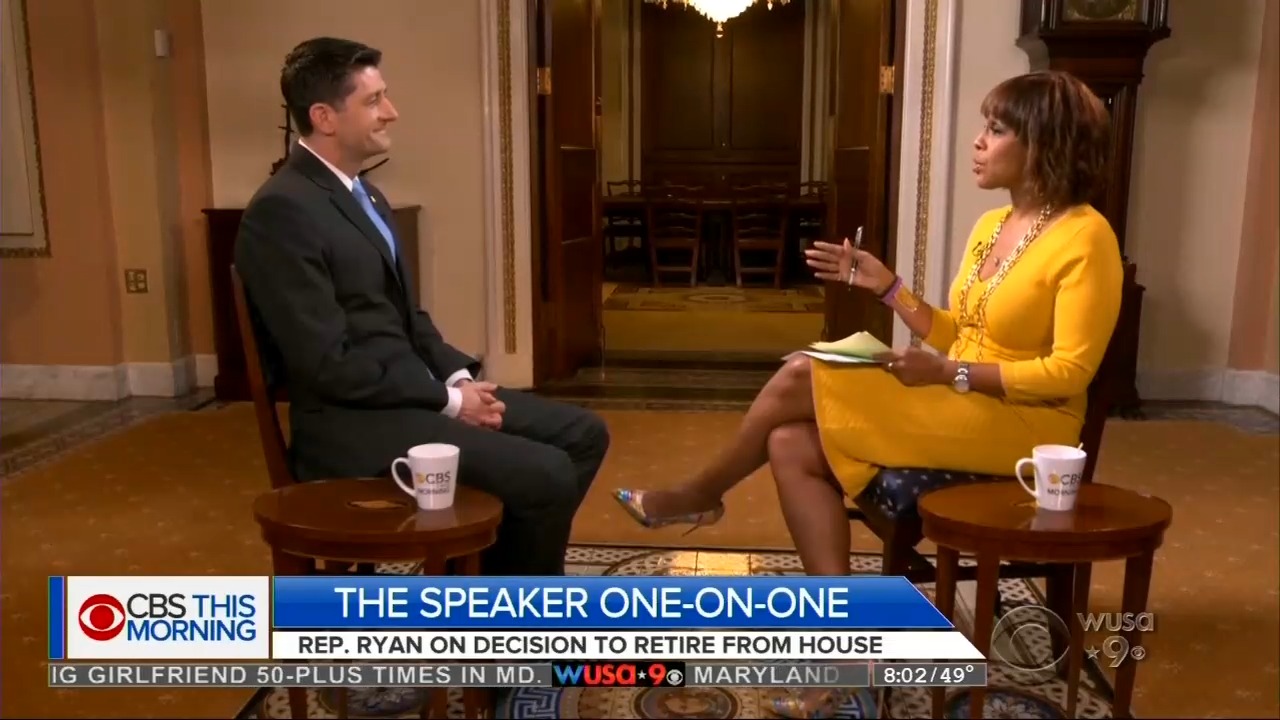 GAYLE KING: Yes, that’s right, John. Weekend dad no more. Speaker Ryan is joining us now to tell us, take us behind the scenes of your decision. Because this is the thing, Mr. Speaker a couple of months ago when you were asked about it, you said, “That's ridiculous, I'm not even considering it. No way. I’m here to stay.” What has changed in the last couple of months.

SPEAKER OF THE HOUSE PAUL RYAN: Well, what I said then was I wasn’t going to resign. And I’m not doing that. So, the question was, once tax reform was done, was I going to resign and the answer was no. I’m going to run through the tape, finish the term.

KING: I think the question implied you were going to be here for the long haul, whether it was resign or retire.

KING: Did you ever consider moving your kids to D.C. so you wouldn’t have to deal with that?

KING: I think, Mr. Speaker, nobody questions your dedication to your family and love to your family. I was taking the Acela yesterday, the 4:00. You were the topic of conversation on the train. I heard two schools of thought, “Yay, freedom for him” or “What happened to Paul Ryan?” Did Trump fatigue in any way play a role?

KING: So, you're very happy with your decision. Still I go back to many people who say if we had a different president in the White House, he would still be there. After a while it got to —  this is what people said to me, Mr. Speaker: “What happened to Paul Ryan?” You know, why didn't he speak up? Why didn't he stand up to the President about many things that were personally offensive to you and if we had a different person in the White House, you would not be leaving.

RYAN: No, that's not the case. It's really a timing of family and I accomplished much of the agenda of what I’ve come here to accomplish.
...

KING: Yeah. Your mentor Jack Kemp is very different from President Trump. Do you ever feel that you had to compromise your own personal values to play along to get along?

RYAN: No. We obviously have our differences. And we’ve disagreed privately and publicly .And that is the way it is. But I do believe I'm doing things that are in the best interests of the country to move it forward.

KING: Did he make it difficult for you? To do your job?

KING: You had dinner with the president last night. There was a big picture photo with thumbs-up. Very celebratory. What were you all celebrating?

KING: When I look at that picture, Mr. Speaker, I have to say, I don't see anyone that looks like me, in terms of color or gender. And you were one of the main people that said you want to do more to expand, you wanted to expand the base. Some say this president really doesn’t want to expand the base. So, when I look at that picture, I have to say, I don’t feel very celebratory. I feel very excluded.

RYAN: I don’t like that you feel that way. And we need more minorities, more women in our party.

KING: You do have a very busy day job and some people look at it and say that, you know, especially your timing now, you know, when some would say you're needed more than ever as we get ready for the midterm elections that are you jumping ship and really leaving the Republican Party where we need the Republicans, some say.

RYAN: Everybody loves you because of that. No, but seriously. First of all, I'm not going anywhere any time soon. I’m running through the tape.

KING: Do you feel like you're jumping ship though?

KING: It sends a message to some that you're stepping down at this time.

KING: Who would you like to see at your gavel?

KING: Because I keep thinking about the piece that Norah did with Mr. Scalise. And when you walked in, there was clearly a bond between the two was so genuine and so raw. Can you say yay or nay?

KING: Let's talk about the news of the day with Mr. Mueller. There's word  that Steve Bannon is in the President's ear again and he's encouraging him to fire Robert Mueller, encouraging him not to participate with the investigation. What are your thoughts on that?

KING: Why don’t you think it’s under consideration?

KING: But Mr. Speaker, you can have conversations with people in the White House that say one thing one day and the next day it’s totally different. It’s whiplash trying to keep up with the conversation there.

KING: What are you proudest of as you get ready to retire?

KING: This is something that's bubbling up this morning. You said not resigning You said you are retiring. But there are some of your colleagues that are saying “Buh bye Paul Ryan. It’s time for you to go now.” Let’s get a Speaker in there now before the midterm election. What do you say about that? People are saying “There’s the door right over there, Mr. Ryan.”

KING: One more thing with teenagers, do they want you home, Paul Ryan?

KING: We wish you nothing but the best. Of course this story is not over. We will have many more conversations before January with you. Thank you very much.