The appalling way in which Ted Kennedy treated women is currently being exposed in the new film Chappaquiddick. But you wouldn’t know about the sordid legacy of the Kennedy family in the nearly nine minutes CBS spent on Joe Kennedy III. Instead, the network on Friday and Sunday serenaded the “legendary,” storied” Kennedys and hyped Joe Kennedy’s possible presidential run in 2020.

Chappaquiddick and the #MeToo movement never came up in the seven minutes Gayle King devoted to the Massachusetts Congressman on Sunday Morning. King, a Democratic donor as well as weekday co-host, cheered: “Joe Kennedy III remains a rising star, in part because he seems to rise above the fray  and in politics that could be worth everything.”

Former chairman of the Democratic National Committee said this about you. “This is a Kennedy who could be president. A must watch.” Should we be watching you in 2020, Joe Kennedy III?

(The other Democrat in question is fellow liberal Howard Dean.)

Sunday Morning host Lee Cowan began the segment by gushing: “Congressman Joseph Kennedy III is the latest in his storied clan to be carrying the torch President John F. Kennedy spoke of in his 1961 inaugural address.” 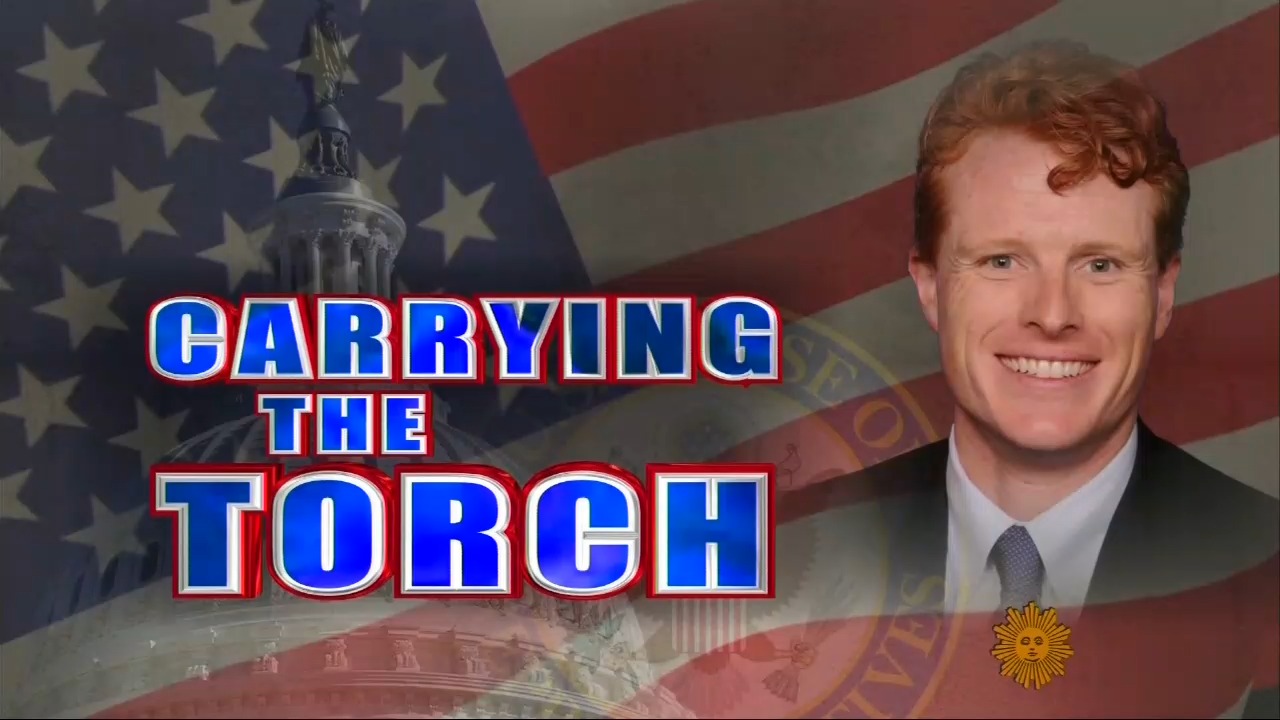 The CBS graphic looked like a campaign poster: A smiling Kennedy is next to the words “carrying the torch.”

King blindly parroted talking points from the Democrat, repeating: “Now he says he wants Congress to take action to protect kids from school shootings. But he says he's frustrated with the direction of the gun control debate.”

Yet, strangely, another issue that’s been in the news didn’t come up: The Me Too movement, #Timesup, whatever one wants to call the cries against sexual harassment and abuse. Could this because it might be uncomfortable to talk to the Congressman about Ted Kennedy (great-uncle) leaving a woman to drown or sexual predator John F. Kennedy (great uncle) who forced a teenage intern to perform oral sex on an aide? 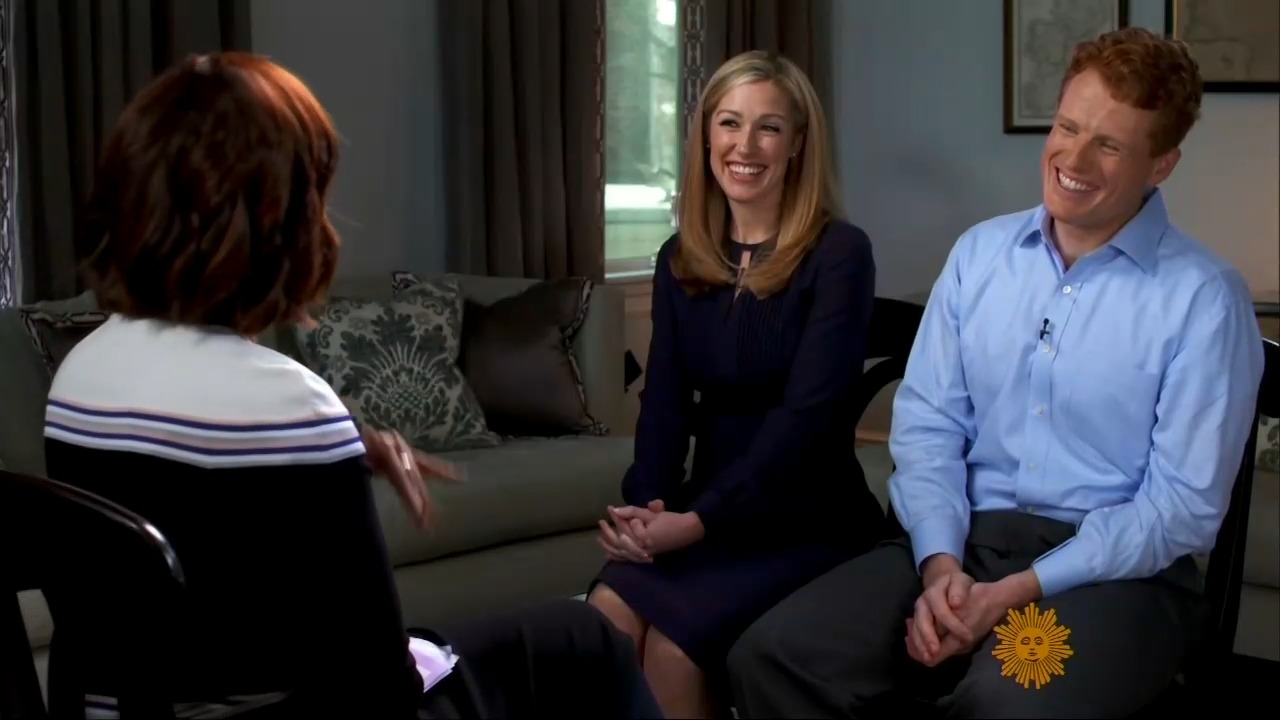 Here’s how National Review’s Jim Geraghty would have phrased the question to the Democrat:

Joe Kennedy III may be an absolute gentleman with women and I hope he is. But when he salutes America’s women for “bravely saying, ‘me too,’” some of us can only think of John F. Kennedy bedding 19-year-old White House interns and Ted Kennedy making a “waitress sandwich” with Chris Dodd. For a long time, the Kennedy men embodied everything that #MeToo opposes.

As the MRC's Bill D'Agostino noted, the networks have mostly avoided interviewing the stars of the new film Chappaquiddick. CBS This Morning totally avoided talking to the cast of the political drama.

LEE COWAN: Congressman Joseph Kennedy III is the latest in his storied clan to be carrying the torch President John F. Kennedy spoke of in his 1961 inaugural address. It’s a family legacy very much on his mind as he recently told CBS This Morning’s Gayle King.

JOE KENNEDY III: It is and my dad.

KING: Keepsakes that also happen to be national treasures.

KENNEDY III: It's one of the —  you know, handful of photos that I know of that is still around of my dad and my grandfather.

KING: His grandfather, Senator Robert F. Kennedy, was assassinated in 1968. At the time, Joe Kennedy's father was just 15.

KENNEDY III: Both of them in a very casual moment but an authentic one.

KING: At 37, Congressman Kennedy is the latest of the legendary Democratic clan to pick up the political mantle, he's well aware of all that implies.

KING: Every time you give a speech, any time you go somewhere don't you think you're being compared to all the Kennedys that came before you?

KENNEDY III: On the one hand, yes, I am. On the other hand, how the heck do you compare yourself to President Kennedy in every speech? You’re not going to be as good. Just not going to happen.

KING: He's not letting that stop him from speaking his mind. Last year, it was Kennedy's stand against cuts to the health care law that first put the three-term congressman in the national spotlight.

KENNEDY III: Chairman, I was struck last night by a comment that I heard made by Speaker Ryan.

KING: You responded to Paul Ryan because he called for a plan to repeal the Affordable Care Act an act of mercy.

KENNEDY III: [Clip from Congress.] With all due respect to our Speaker, he and I must have read different scripture. [Clip ends.] I have a hard time cutting the program in our country that provides health care to working families by $800 billion can be classified as mercy.

KING: Now he says, he wants Congress to take action to protect kids from school shootings. But he says he's frustrated with the direction of the gun control debate.

KENNEDY III: To have to have these absurd conversations about arming teachers and turning our schools into fortresses,.

KING: You do feel that's absurd?

KENNEDY III: I think it's absurd on so many levels.

KING: As an elected official, what do you see as your role in these shootings, is it — do you feel empowered? Do you feel guilt? Do you feel beaten down?

KENNEDY III: It’s horrifying, Gayle. It's horrifying. Because we've gone through this over and over and over again. I have no doubt that at some point historians will look back at this moment say, the government failed our kids. The question is, how quickly will we correct that mistake?

KENNEDY III:  The person that actually pushed me hardest not to do this was my dad. Because —

KING: He pushed you do the no do it? What did your dad say to you?

KENNEDY III: Yeah. He said, make sure that this is something that one, you're ready for. Two, that you find somewhere inside that this is a commitment coming from you. Because if it is not, he said people will tell.

KENNEDY III: He says he fights for national issues like equal pay for equal works and protecting benefits for seniors with his constituents in mind. Still, as he told talk show host Jimmy Kimmel, he is against legalizing marijuana beyond medical use, even though it's legal in his home state. [On Kimmel.] I realize my views on this are not exactly in line with —

KENNEDY III: The American public will give you an awful lot of slack on how you voted on one issue or another if they feel like you have a reason. What will get you elected through a tough election cycle and what will get you kicked out when you should have won is whether your constituents feel like their member of Congress respects them or not.

KING: That's true of his most important constituent, his life, wife Lauren. They married in 2012 after meeting as classmates at Harvard Law School. What point does it go, “Hey, Joe.” “Hey, Lauren.”

KENNEDY III: I’m not sure when it went “Hey, Joe. It went “Hey, Lauren, pretty quickly. It took a little while for her to warm up.

KING: And what was it for you, Lauren, that you thought, okay? Because you knew he was a Kenndy. Or did you know he was a Kennedy?

LAUREN KENNEDY: I didn’t know he was one of those Kennedys. I crew up in California. So, growing up out there, you get a little less of the sort of, 'Here's what each one of them looks like,' and the 'Where are they now?' which was kind of nice. I got the opportunity just to get to know Joe for who he was. And the rest is history."

KING: But not so fast. First, Joe Kennedy of the famously Catholic, liberal Kennedys had to meet Lauren's Protestant, conservative family.

LAUREN KENNEDY: Quite a moment for them when I sort of announced that I was coming home with my new boyfriend, who is Joe Kennedy.

KING: They now have two children: Eleanor, who's two, and baby James,  was born in December.

KING: A month later, Kennedy was tapped for the high-profile Democratic response to President Trump's State of the Union Address. But not everything went according to plan:

KENNEDY III: You are waiting for the President to end, which took a little while this time around. He went —  he went a little long. I was in the unfortunate circumstance of trying to balance water consumption and ChapStick application and messed up one one of those.

KING: Oh, ChapStick Gate. I forgot all about that.

KENNEDY III: It would be easy to dismiss this past year's chaos.

KING: During his speech, a shine at the corner of his mouth drove some viewers to distraction.

LAUREN KENNEDY: From our angle all you could sort of see was the, you know, the lights reflecting off it. So when we got in the car ride home I immediately started looking at Twitter to see if —  if indeed his lips had looked a little extra shiny and —

LAUREN KENNEDY: It's a vicious, vicious twitter-verse out there.

KING: But the viciousness didn't stick. Joe Kennedy III remains a rising star, in part because he seems to rise above the fray  and in politics that could be worth everything. Former chairman of the Democratic National Committee said this about you. “This is a Kennedy who could be president. A must watch.” Should we be watching you in 2020, Joe Kennedy III?

KENNDY: I wouldn't hold your breath on that one. I happen to be in a position where the moment you have one job, the first thing everybody wants to know when are you trying to get another one. I've got a pretty full plate as you know. The job is the easiest part of my day. It's not even close. There is nothing so humbling as being a parent to young children.