CBS This Morning on Tuesday freaked out over the Environmental Protection Agency’s decision to dump higher fuel economy standards. Or as co-host Gayle King put it: “The Trump administration is set to roll back one of President Barack Obama's signature policies on the environment.”

The show opened with visuals of dirty cars and power plants pumping pollution into the environment. King underlined: “The EPA will announce plans to reverse Obama-era fuel standards meant to fight air pollution. The move sets up a showdown with environmental groups.”

Reporter Chip Reid at least allowed for the EPA Administrator to state the reason, but immediately shifted to the coming “firestorm” over the decision:

[Scott] Pruitt says rolling back greenhouse gas emission and fuel economy standards will help not only the car industry but consumers, but also consumers. But it's expected to ignite a firestorm of criticism here in Washington. 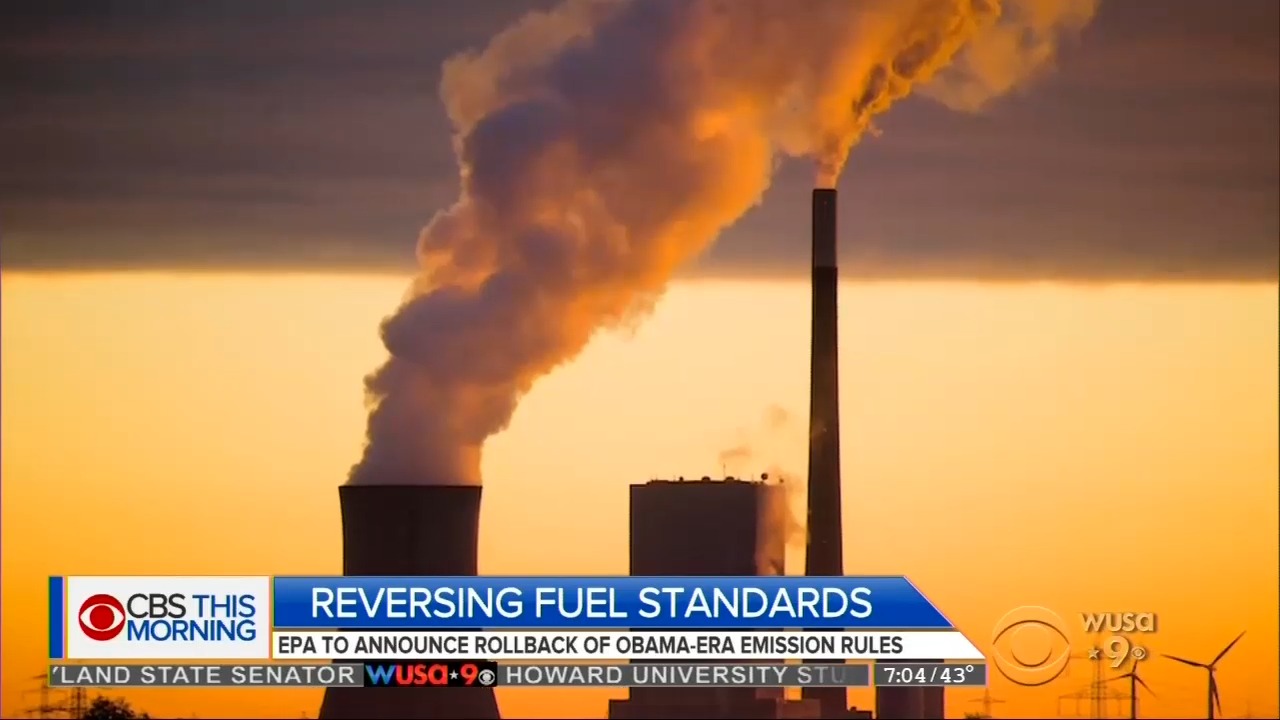 The current iteration of the CAFE program began with 2012 models and was the result of intense negotiations between the Obama administration and automakers. Although the benchmarks will remain in effect through 2021, the next phase — in which all automakers would have had to ensure that their vehicles averaged about 54.5 mpg — was seen as the most difficult to achieve.

The rest of the CBS story focused on the controversy involving Pruitt renting a D.C. condo for a way below market rate of $50 a month from an energy lobbyist. 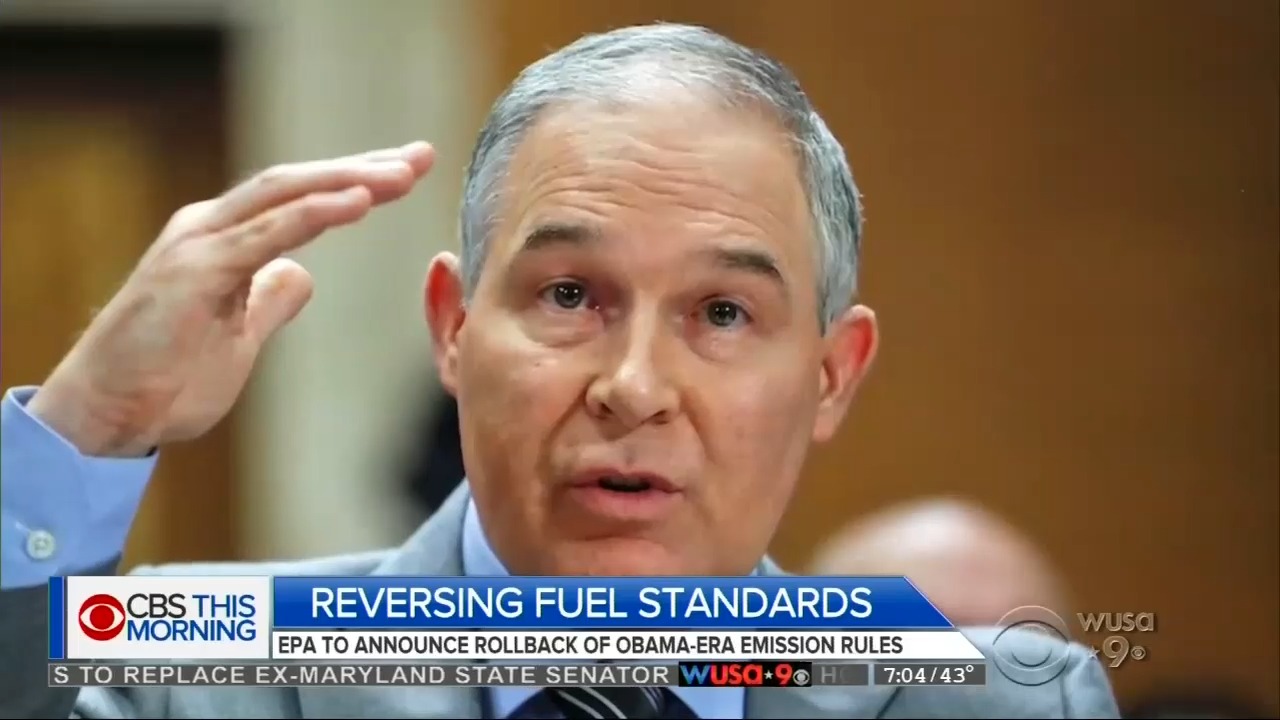 Over on NBC’s Today, despite a four hour run-time, the program completely skipped the big news out of the EPA. On ABC’s Good Morning America, reporter Jon Karl focused solely on the scandal involving Pruitt:

This is all tied to this apartment that he has rented on Capitol Hill for $50 a night from the lobbyist for a Canadian energy department, a company, a lobbyist that is paid to lobby the Environmental Protection Agency.

Certainly, that part of the story deserves coverage, but so does explaining what the new policy will be.

A transcript of the CBS segment is below. Click “expand” to read more:

CBS This Morning
7am tease

GAYLE KING: The EPA will announce plans to reverse Obama-era fuel standards meant to fight air pollution. The move sets up a showdown with environmental groups.
4/3/18
7:03:55 to 7:06:17

KING: The Trump administration is set to roll back one of President Barack Obama's signature policies on the environment. The move comes from the head of the Environmental Protection Agency. That’s Scott Pruitt.

JOHN DICKERSON: Today, Pruitt is expected to announce a reversal of tougher Obama-era standards for rules on greenhouse gas emissions and fuel economy. That would set up a showdown with lawmakers and environmental groups.

BIANNA GOLODRYGA: Meanwhile, the White House is reportedly reviewing reports that Pruitt paid a below-market rate to live in a Washington condo tied to an energy lobbyist — energy industry lobbyist. Chip Reid is at the White House with more. Chip, good morning.

CHIP REID: Well, good morning. Pruitt says rolling back greenhouse gas emission and fuel economy standards will help not only the car industry but consumers, but also consumers. But it's expected to ignite a firestorm of criticism here in Washington.

SCOTT PRUITT: I think that measuring with precision human activity on the climate is something very challenging to do.

REID: EPA Administrator Scott Pruitt has previously questioned the impact of carbon dioxide emissions on the environment, something President Trump also doubted on the campaign trail.

REID: In a press release, the EPA announced “the current carbon dioxide emission and fuel economy standards are not appropriate and should be revised,” but did not say what the revisions would be. The move could set up a legal fight between the Trump administration and California which has vowed to stick with the current regulations and has a waiver through the Clean Air Act to set its own emissions standards.

The announcement comes as Pruitt is facing new ethics questions regarding a condo rented from the wife of a top energy lobbyist. Until last July Pruitt was renting it for $50 a night from the wife of Steven Hart, chairman of a top Washington lobbying firm. Hart's firm reportedly lobbied to scale back Barack Obama-era EPA rules limiting greenhouse gas emissions from existing power plants. The EPA also reportedly signed off on a pipeline plan for another company linked to the firm at the same time Pruitt was renting the condo.

PRUITT: I was flying coach.

REID: Pruitt is also facing questions about his first-class plane travel which cost taxpayers tens of thousands of dollars. Pruitt said it was necessary because of threats he's received.

PRUITT: The security detail that I had, they wanted me on a position to exit expeditiously if an incident arose.

REID: We just received a statement from a spokesperson at the EPA that reads, "Administrator Pruitt is focused on advancing President Trump's agenda of regulatory certainty and environmental stewardship." By the way, there are reports that Pruitt's job is in jeopardy, but just last week, president Trump called him to say he's doing a good job. John?