Apparently, CBS’s idea of fairness is to allow a journalist who is on record calling for the destruction of the Second Amendment to moderate a segment on guns.  On Thursday's This Morning, Alex Wagner grilled moderate Republican Senator Jeff Flake on what it will take to “break the spell” of the National Rifle Association.

She lectured the man who often opposes his own party: “Senator, the President also said the NRA has ‘great power over you people.’ You were endorsed by the NRA in 2012. You accepted campaign donations from them.”

Wagner whined, “What is it going take to break the spell between certain members of Congress and the National Rifle Association?” After Flake made it clear he would support gun control, the journalist reiterated, “That could break the spell?” 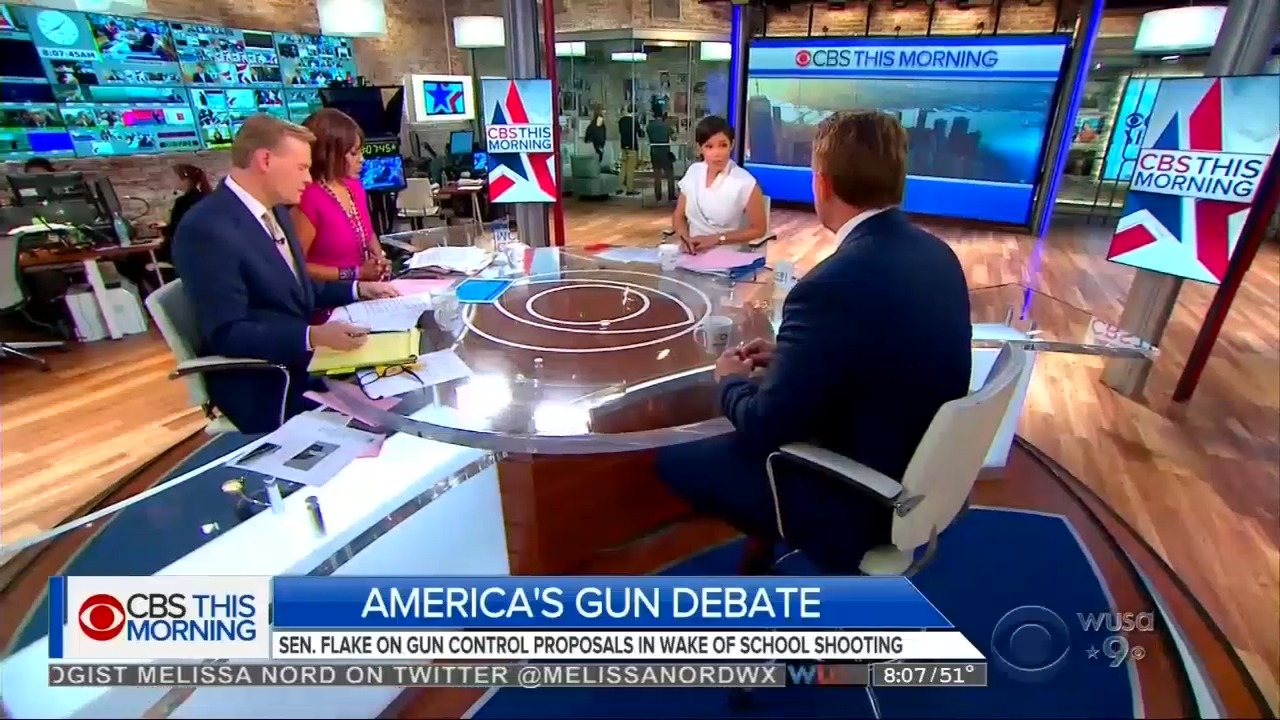 Wagner is on record as holding an extremist position when it comes to the Second Amendment. On November 4, 2011, the then-MSNBC journalist appeared on HBO’s Real Time and proclaimed:

I think get rid of the Second Amendment, the right to bear arms. I just think in the grand scheme of the rights that we have; the right of assembly, free speech, I mean, owning a gun does not, it does not tally on the same level as those other Constitutional rights.

On February 14, 2013, Wagner smeared the NRA as “racist” and said that the organization’s President, Wayne LaPierre, is afraid of “dark people.” (For more on Wagner's history of hard-left bias, go here.)

How is someone like that qualified to moderate a supposedly serious discussion on CBS? Co-host Gayle King touted Flake for turning against the NRA: “Now that you're not running for re-election, do you feel freer to speak up against the NRA and the President in ways you didn’t feel you could do before?"

King, it should be pointed out, is a Democratic donor. This is objectivity on CBS.

JOHN DICKERSON: Arizona Senator Jeff flake also wants congress to take action. The Republican is proposing laws to prevented bump stocks and prevented individuals on the no fly list from buys guns. Flake also introduced a bill to propose raising the minimum age to 21 to buy assault weapons from 18 to 21. Senator Flake is with us for an interview you’ll only see on CBS This Morning. Good morning, Senator. It’s great to have you on.

SENATOR JEFF FLAKE: Thanks for having me on.

DICKERSON: Before we get into specifics, I want to speak more generally about the president.

DICKERSON: He said in that meeting, “I think it's time that a president stepped up. Is he now on your side? Is he going step up and what would that look like?

DICKERSON: What does leadership look like? Does it mean he has to say, “I want A, B, C, and D to pass?”  Does it mean getting on the phone and calling Republicans? What does it exactly look like? 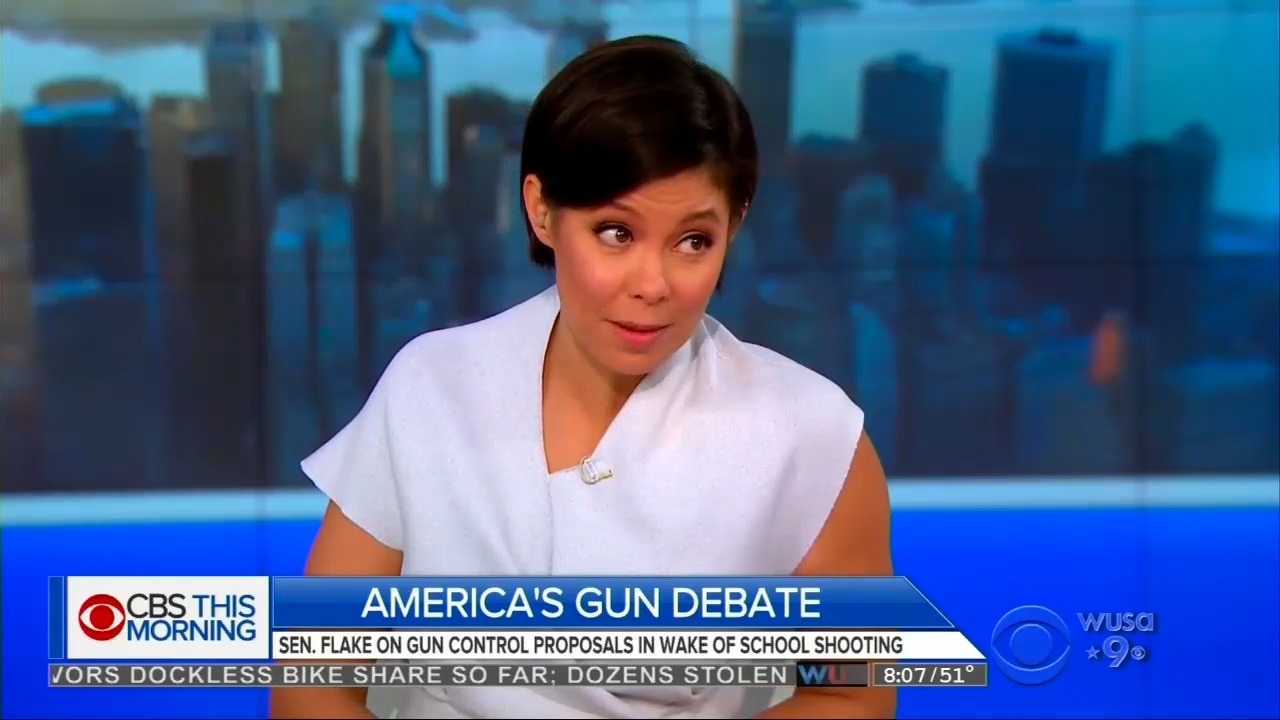 ALEX WAGNER: Senator, the President also said the NRA has “great power over you people.” You were endorsed by the NRA in 2012. You accepted campaign donations from them. What is it going take to break the spell between certain members of Congress and the National Rifle Association?

FLAKE: Like most of my colleagues, I sometimes support the NRA, sometimes I don't. I've always supported, in the past, have supported, for example, the no fly, no buy. The NRA has been adamantly opposed to that. I believe they still are. So I think that — But now having the president say, “I'm okay with these things”  will mean a lot to colleagues.

WAGNER: That could break the spell?

FLAKE: For me I'm not running for re-election, freed from those concerns. But I have to say in the past I've supported a lot of measures that the NRA has not supported.

KING: Now that you're not running for re-election, do you feel freer to speak up against the NRA and the president in ways you didn’t feel you could do before?

FLAKE: You bet. It goes without saying that you're freed of political considerations. That's one of the things that lead me to make the decision. I didn’t want to go for this last year, you know, beholden to, one, the time involved, the fund-raising and everything else. I thought it was important that somebody stand up. I'm very concerned about the direction of the administration on a direction of issues and I thought somebody should stand up.

DICKERSON: Let me ask you this question about raising the age to 21. The Washington Post did some counting here and found that of the 153 mass shootings since 1966 only 18 of them were committed by people under the age of 21 and I think the number is even smaller who used the kind of assault weapons you are trying to limit. That seems like a very small portion of this larger question you’re trying to fix here.

DICKERSON: Let me ask you about the bigger question of gun violence in America. One of the things people would like is more of a study by the CDC and to cover it like a health issue. Is that something you would support?

FLAKE: Yes. I would. Think there are things that can be useful to legislators as we make decisions and findings of the CDC would be helpful in that regard.

DICKERSON: So Congress would have to undo a lot to allow that to happen?

FLAKE: And I think they can and will on this.

KING: I'm fascinated with your answer about, “Yeah, feel more empowered to speak up.” But why is it? I’ve heard Republicans in office now who say what we're seeing is crazy town and they're not speaking up even when they disagree with the President. Why don't people who disagree feel that they cannot stand up and speak up against him?

WAGNER: Senator, we would be remiss if we didn't ask you about DACA and the state of 700,000 young men and women waiting on it. Can you tell us?

KING: But you are heading up to New Hampshire for an event that's described as meeting with business leaders with a chance to meet with major party presidential candidates.

WAGNER: Hmm. Who could that be?

KING: Should we take that as anything about your plans for 2020?

FLAKE: I got an invitation, I accepted it.