Surprise! Journalists should stand up to those in power and “question the government.” That’s the lesson learned from the hosts of CBS This Morning after seeing a worshipful new film about the Washington Post. On Wednesday, reporter Jan Crawford talked to two stars of The Post, a film set in 1971 that features “heroes” who stand up to Richard Nixon.

Rather ridiculously, Bob Odenkirk, who co-stars in the movie, asserted, “To me, it's a non-partisan film. I don't see why any Republican wouldn't like this movie except if they love Nixon.” In fact, there are almost NO Republicans in The Post and the film is mostly a conversation between the left and the center-left.

Crawford absolutely gushed over the film, which chronicles the Washington Post’s decision to publish the Vietnam-centered Pentagon Papers, cheering the actors: “You celebrate the best parts of journalism, which is finding out what the truth is.” 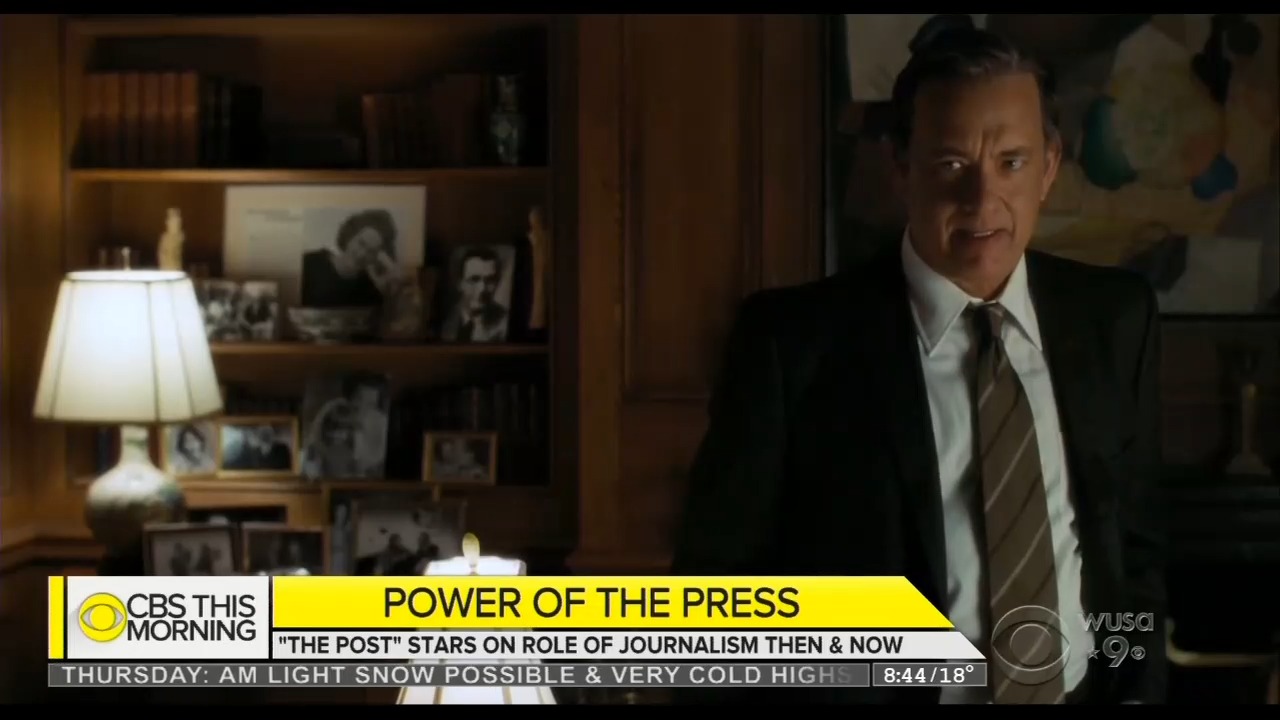 Crawford simplistically explained that “the lesson of the Pentagon Papers for the public is that we are right to question the government.” Co-host Bianna Golodryga heralded, “It's interesting how they said no matter what party you are, you shouldn't believe everything a politician tells you.”

Of course, these journalists failed to ask why there's no film exposing actions such as Barack Obama spying on Fox News reporter James Rosen or how the ex-president derailed a government effort to stop Hezbollah’s trafficking of cocaine. But, then, Obama is a Democrat.

Unsurprisingly, Crawford failed to label some of the leftist journalists portayed in the film. She referred to reporter Ben Bagdikian, a Post reporter in the '70s, as simply an “outspoken critic of the Nixon administration.” Not mentioned? Bagdikian was also a vocal liberal who went so far as to endorse Ralph Nader in 2000.

In December, This Morning co-hosts touted The Post, saying it was “ripped from the headlines.” Naturally, they compared Donald Trump to Nixon. 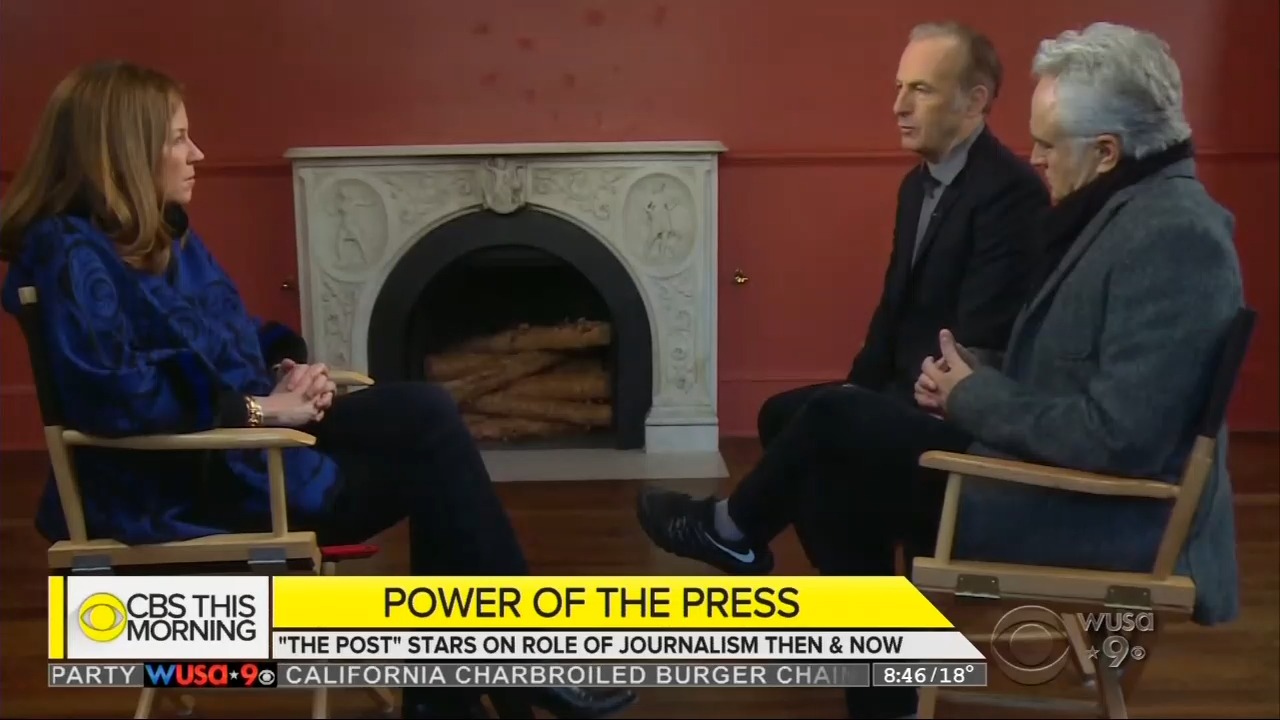 JAN CRAWFORD: Well, good morning. So, you know, a lot of the movie actually takes place here in Georgetown at Katherine Graham's mansion where she decides to stand up to the government and really comes into her own as publisher.

CRAWFORD: The story exposed the truth about Vietnam and transformed a newspaper —

KATHERINE GRAHAM: We are extremely gratified.

CRAWFORD: — and its female publisher Katherine Graham into journalistic icons. The new movie, The Post, reveals unsung heroes and the powerful pressures on the legendary publisher with a message that resonates today.

BRADLEY WHITFORD: It's about a lot of things, about women, what's going on with the press, about our need to be vigilant, that you have got to make a democracy every day. You just don't get it. But Steven Spielberg has no interest in serving civic vegetables. That’s not what Steven Spielberg is all about.

CRAWFORD: At its heart, The Post is about a woman who finds her voice and changes the course of history when she decides the Washington Post, risking financial ruin, would print the story of the Pentagon Papers.

MERYL STREEP: It was a world of men.

CRAWFORD: Meryl Streep plays Graham in the movie. On CBS This Morning, she talked about her unique role as a woman in charge.

MERYL STREEP: It came down to her to decide, and she felt alone in that position and was, you know, put on the spot.

BOB ODENKIRK: It all came down right in here.

CRAWFORD: We visited Graham's historic home in Georgetown neighborhood of Washington, D.C., with Bob Odenkirk and Bradley Whitford who portray men on opposing sides of Graham’s struggle. The house remains vacant and largely unchanged since Graham died more than 15 years ago.

ODENKIRK: The emotional thrust of this story is Katherine Graham's internal journey and the other stuff is a fun suspense thriller that is about relevant issues. To me, it's a non-partisan film. I don't see why any Republican wouldn't like this movie except if they love Nixon.

RICHARD NIXON: No reporter from the Washington Post is ever to be in the White House. Is that clear?

CRAWFORD: With portrayals of people behind the Post stories. Like reporter Ben Bagdikian , an outspoken critic of the Nixon administration’s attacks on the media who helped track down the classified documents.

BEN BAGDIKIAN: The media, already vulnerable, are being made a scapegoat for ironic reasons. A scapegoat by the administration quite clearly.

ODENKIRK: I’m proudest of just showing a bunch of professional journalists at work arguing and fighting and trying to figure out what they have a right to do and what's right.

CRAWFORD: You celebrate the best part of journalism which is finding out what the truth is.

ODENKIRK: My character is the true believer, the reporter who just wants the story and just wants to tell the public the story.

ODENKIRK: If you have the truth, you should print it. And that's a easy, strong easy opinion to have if you don't have the responsibility of actually keeping the paper alive and you're not the one who will go to jail.

GRAHAM: Facing a possible criminal contempt of court charge, Graham chose to stand up to the government and to forces within her own industry.

GRAHAM: Like Post board member Arthur Parsons, played by Whitford, who felt she was unqualified because she was a woman.

WHITFORD: It never occurs to my character that a woman should be able to do this. I'm absolutely on the wrong side, totally wrong side of history, which makes her decision all the more incredible and brave. It’s the most excruciating decision that she has to make. She doesn't know —  you don't know if that's the right decision.

CRAWFORD: Not only was it the right decision, it transformed Graham into a force to be reckoned with, and the Washington Post into a national newspaper. And the lesson of the Pentagon Papers for the public is that we are right to question the government. Bianna?

BIANNA GOLODRYGA: It's interesting how they said no matter what party you are, you shouldn't believe everything a politician tells you. That's what journalists are there to do.

CRAWFORD: I love this movie.

JEFF GLOR: Have you seen it?

GLOR: We tried to see it on Monday. The children interfered. But, you liked it?

CRAWFORD: Yeah. It was terrific and it’s very timely.

GOLODRYGA: And I loved having Meryl and Tom here on set. That was fantastic.

CRAWFORD: They were great.