The journalists at CBS This Morning on Monday hyped the city of Copenhagen’s obsessive drive to eliminate cars. Touting solar powers, Mo Rocca praised, “It’s all part of Copenhagen's ambitious plan to become the cleanest energy city in the world.”

Morten Kabell, Copenhagen’s mayor of Technical and Environmental Affairs, bragged, “For many tourists and visitors coming to Copenhagen, it's quite a surprise to notice that bikes have right-of-way for most of the city.”

Rocca marveled, “Discouraging the use of cars has some unintended consequences. The tax on a car can be as much as 150 percent of the sale price of the actual car.” Apparently that is discouraging people from buying newer, environmentally friendly vehicles. Imagine that!

According to Bloomberg, “A basic Porsche 911 Carrera sports car will set you back as much as a one-bedroom apartment in the capital -- $306,600 versus $117,900 in Germany.” Rocca wondered, “Are Danes raised with the consciousness about the climate and healthy environment?”

Co-host Gayle King lectured, "It seems like the U.S. could learn some things from Copenhagen.” 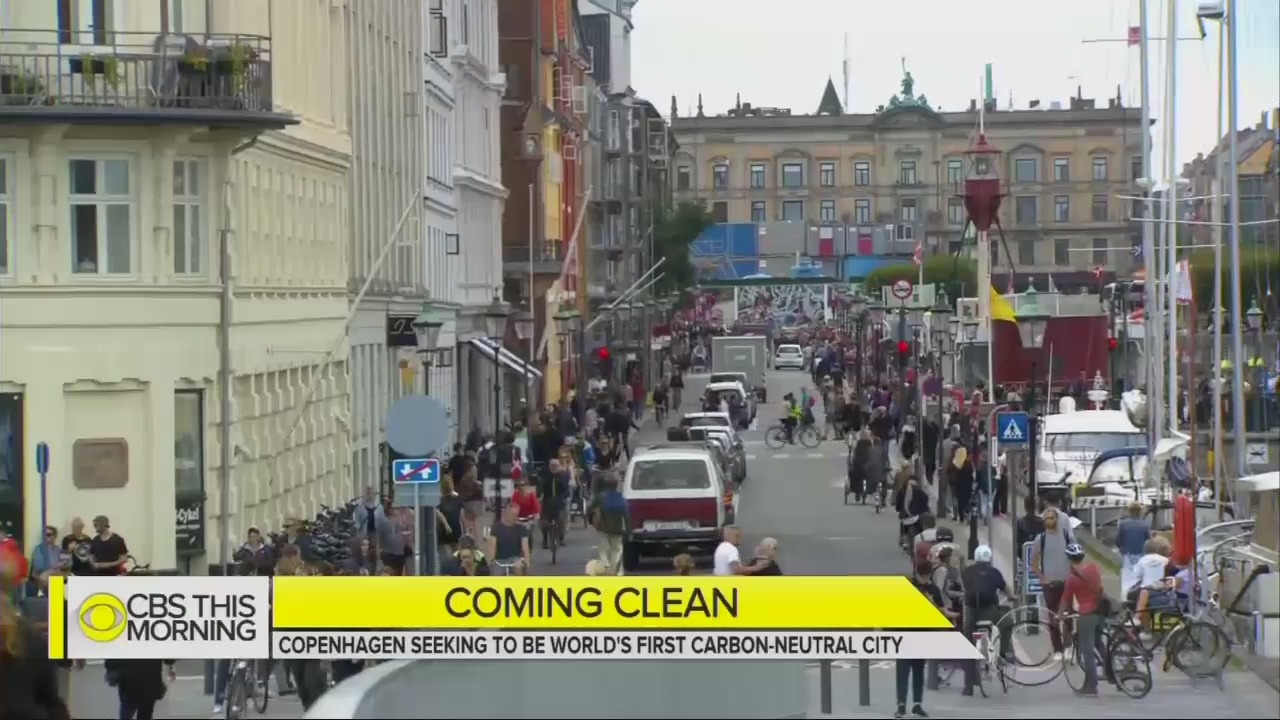 GAYLE KING: Cities in the United States are seeking advice from abroad to help fight climate change.  The mayors of Boston and Cambridge, Massachusetts, signed a pact last month with the mayor of Copenhagen in Denmark. The goal is to share ideas to create more sustainable cities. Copenhagen is considered a global leader when it comes to clean energy. The Danish capital has transformed its infrastructure with a goal to become the first carbon-neutral city in the world. CBS Sunday Morning's Mo Rocca is at one school in Copenhagen which serves as an example of the city’s dedication to the cause. Mo, good morning.

MO ROCCA Good morning. I'm out front of the Copenhagen International Solar Powered School. It’s just the latest architectural marvel to grace this beautiful city and it’s all part of Copenhagen's ambitious plan to become the cleanest energy city in the world. Danish architecture has long been renowned the world over for iconic buildings like the Sydney Opera House and the Legrand Arch in Paris.

MADS MANDRUP (C.F. Moller Architects partner): For the kids, they can stand here and they can look at the actually panel and see, ah, this is how it works.

ROCCA: But today's Danish architects, like Mads Mandrup, are designing with a higher purpose. He was the lead architect of a Copenhagen International School. Essentially a solar power plant.

MANDRUP:  It is a solar power plant. We have about 12,000 square meters of panels here.

ROCCA: The blue glass panels, which very in hue depending on exposure to light provide half of the building’s power. Denmark is beautiful, but it’s not the sunniest place in the world. What happens on a cloudy day?

MANDRUP:  On a cloudy day here, it produces less. But, however, we’ve been monitoring and we are on track in terms of the numbers we’ve set up, of course.

ROCCA: And Copenhagen is on track to reach it goal to become the first carbon neutral city in the world, producing as much energy, all of it clean, as it consumes by the year 2025.

MORTEN KABELL (Copenhagen Mayor of technical and Environmental Affairs):  We're currently enlisting about $1 billion in wind turbines in and around Copenhagen. And in the future, we will be doing geothermical heat. And, of course, we’ve planted a whole lot of trees.

KABELL: I ride my bike every day. I've never owned a car. And for many tourists and visitors coming to Copenhagen, it's quite a surprise to notice that bikes have right-of-way for most of the city.

ROCCA: Today 62 percent of commuters here bike to work, a movement that began during the energy crisis of the 1970s.

CAMILLA RICHTER-FRIIS-VAN DEURS (Gehl architects partner): Gasoline is so expensive that we have all these rules that emphasize cycling.

RICHTER-FRIIS-VAN DEURS We are growing by about 1000 people every month.

ROCCA: People are having more kids.

RICHTER-FRIIS-VAN DEURS: They are having more babies. They are staying in the city because the city is so liveable.

ROCCA: Her firm, Gehl Architects, helped make New York’s Times Square pedestrian friendly and designed a Danish-style network of bike lanes throughout the city.  Tell me, why are bicycle helmets not required?

RICHTER-FRIIS-VAN DEURS: They did a study looking at the overall health of people cycling in the city that women are likely to cycle if you have to wear a helmet. So the health improved overall by not making helmets mandatory.

ROCCA: Got it.  Discouraging the use of cars has some unintended consequences. The tax on a car can be as much as 150 percent of the sale price of the actual car.

RICHTER-FRIIS-VAN DEURS Yes. But one of the side effects is the collective car mass is older and, of course, older cars commit more, CO2. So, it's not doing the best it can.

ROCCA: A minor speed bump perhaps on Copenhagen's ride into the future best on display in its neighborhood.

BJARKE INGELS: I think what we've tried to do is to infuse into this sort of contemporary or modern form of architecture an element that is, like, socially and environmentally active.

ROCCA: Bjarke Ingels has moved mountains into Copenhagen's famously flat landscape. This residential tower has a grass rooftop and bike trails that lead all the way to the top. And coming soon, Denmark's first alpine ski run built atop a power plant. And, yes, the plant itself is carbon-neutral.

INGELS: Green technology is not only good for the birds or the fish, but it's amazing for the citizens because now probably now probably the coolest part in Copenhagen is going to be the roof of our power plant.

ROCCA: Ingels says that steam you see is as clean as mountain air. Are Danes raised with the consciousness about the climate and healthy environment?

KABELL: I don't think Danes are born with that but we have a culture of being practical. Danes love being lazy. We're as lazy as anybody else. So, it’s about making the right choices.

ROCCA: So, you can be lazy well into the future.

ROCCA: And I must admit there are five-year-olds who go to this school who know more about
engine that I do. And coming up tomorrow, I'm going to give you all a tour of the beautiful and historic city of Copenhagen, Gayle. You're not going to want to miss this.

KING: I never want to miss anything you do, Mo Rocca. I have never been to Copenhagen. You guys have been.

CHARLIE ROSE: I have been. He's doing a great piece about a fabulous restauranteur.

GOLODRYGA: I don't think he was joking about the five-year-olds knowing more than we do.