Having Sean Spicer appear on the Emmys may be offensive, but the journalists at CBS This Morning on Monday loved the “great” award show for mocking “recurring punch line” Donald Trump.  Trying to spin the event as somehow just general political comedy, Gayle King hailed, “Television’s biggest night was infused with politics and references to the President.” That's one way to put it.

Reporter Kevin Frazier touted the attacks on the President ("lying, hypocritical bigot”) as the most memorable part of the night: “But it really was politics that took center stage. The recurring punch line, President Donald Trump, who never won an Emmy, despite being nominated twice for his reality show past.”

Co-host Norah O’Donnell lauded it as a “one of the best shows ever” and “fun.” Co-host Charlie Rose blurbed it as “well done.” Frazier hailed it as “great.”

Nowhere in either of the two reports was a frank admission that it was simply liberal celebrities giving awards to other liberals and attacking anything not left-wing.

However, unlike CNN and MSNBC, the CBS journalists at least didn’t complain that having Sean Spicer on the award show was an attempt to “normalize” a liar.

[The bias on CBS This Morning was sponsored, by Checkers, the movie Brad’s Status and Mercedes.] 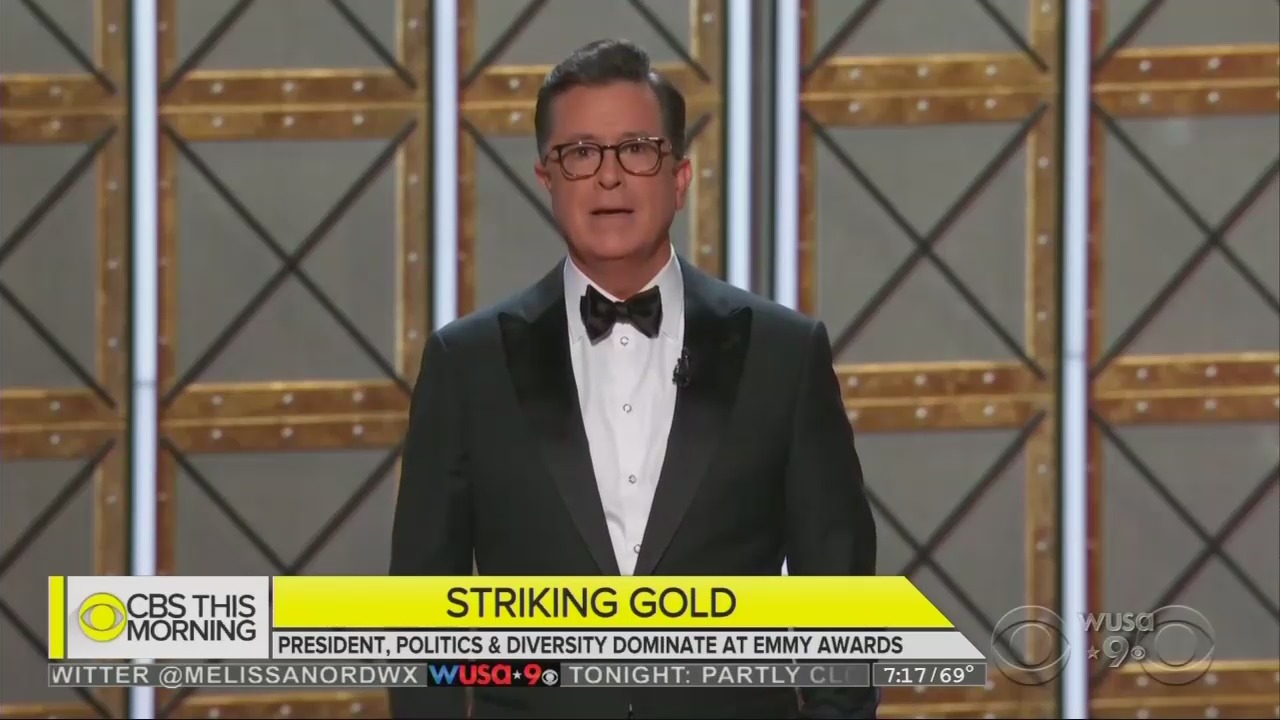 GAYLE KING: Some of Hollywood's top stars, along with newcomers, are celebrating historic wins at the Emmy awards. Television’s biggest night was infused with politics and references to the President. Saturday Night Live was honored for its political satire and women took home awards for Big Little Lies and The Handmaid's Tale. The night also highlighted racial and ethnic diversity. Kevin Frazier from our partners at Entertainment Tonight is in Los Angeles with a look at the night. Kevin, good morning to you. It was quite a night.

KEVIN FRAZIER: It was quite a night. There were history-making moments. But it really was politics that took center stage. The recurring punch line, President Donald Trump, who never won an Emmy, despite being nominated twice for his reality show past.

STEPHEN COLBERT: Why didn't you give him an Emmy? I tell you this. If he had won an Emmy, I bet he wouldn’t have run for President.

GAYLE KING: It was.

O’DONNELL: Kevin Frazier is in Los Angeles. Good morning. I think it was one of the best shows ever.

FRAZIER: It was a great show, wasn't it, Norah? Good morning.