Brian Stelter: Did Emmys 'Normalize' Sean Spicer by 'Rewarding Him With Attention?' 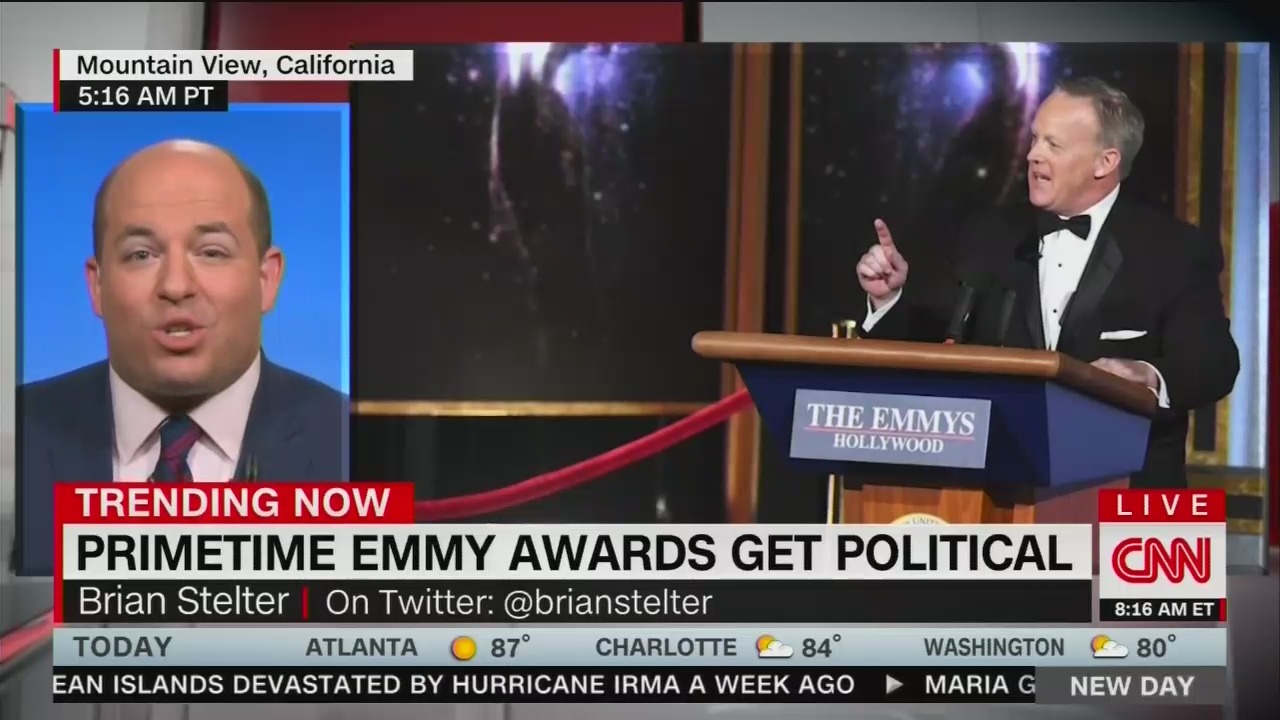 The morning after Sunday night’s Emmy Awards show, the media seemed to be having a collective mental breakdown over former White House Press Secretary Sean Spicer’s surprise appearance during the awards show.

Despite the fact that Spicer poked fun at himself for his comments about the crowd size at President Trump’s inauguration, those in Hollywood and the media weren’t happy with their liberal bubble being invaded by a Republican. Many actors and media types took to social media to voice their complaints about Spicer being invited to the awards show, and CNN’s senior media correspondent Brian Stelter proudly echoed their concerns on Monday’s New Day.

Host Alisyn Camerota introduced Stelter and asked, “Was this Emmys more political than ever before?”

I think in the Trump age everything in Hollywood is more political than it was before and that was definitely true at the Emmys. It was really the Trump White House's credibility crisis on display with Sean Spicer surprising the audience, making jokes about one of his most infamous moments where he was misleading the public, back after the inauguration when he talked about the crowd size. Take a look at this video. What was Spicer doing here? Was he auditioning for a TV job? Take a look.

After playing the clip of Spicer’s brief appearance on stage, and the audience’s shocked reaction to it, Stelter mocked Spicer as desperately looking for work, and boasted that his network turned Spicer down:

Having Melissa in the crowd was crucial of course, having her react to the real-life Sean Spicer. Right now Spicer is looking for work, he’s out there getting public speaking gigs, consulting jobs. He's been looking for a TV commentator deal. If you remember, CNN actually said ‘No, we're not interested in hiring Spicer.’ That was a little bit of a smack at his credibility problems when he was Press Secretary. So far he hasn't found a TV commentator jobs but he was on Kimmel, and now he’s been at the Emmy’s, so he's having some fun with his personality from the White House.

Camerota puffed, “In this age of shamelessness, isn’t it just a matter of time before he gets a TV gig?”

I find it hard to believe that Sean Spicer is not going to land a good job, but in addition to that, obviously the Spicer moment was just that, just a moment. So how else were we seeing politics come to play last night in the awards show?

Stelter noted all the political television shows that won awards last night, saying it was clear Hollywood was “reacting to the Trump age.”

As for criticism of the Emmys bringing on Spicer? Stelter touted “a lot of people” were saying that Colbert “normalized” Sean Spicer by “rewarding him with attention.” However, Stelter noted, it was the anti-Trump CBS late night host’s idea to bring on Spicer:

I think people who were voting on what shows, what winners were going to take home Emmys were certainly thinking about politics, whether it's the Handmaid’s Tale, this breakout show on hulu with a lot of political themes or whether its Last Week Tonight With John Oliver winning for the second year in a row or Alec Baldwin winning for his impersonation of trump on SNL. We saw liberal Hollywood reacting to the Trump age in a variety of categories. As for Spicer, we’ll see who ends up having the last laugh. A lot of people are saying Colbert should not be normalizing Sean Spicer, rewarding him with attention like this. This was Colbert's idea. He thought it would be funny, he thought it would be worth it and of course it's the talk of everybody's social media feeds this morning.

But this wasn’t the only time Stelter fretted about the Emmys “normalizing” Spicer. Just two hours prior, Stelter wondered again, on CNN’s 6 am hour of New Day: “Are the Emmys lending Spicer a hand, are they normalizing his unusually dishonest behavior from the podium?” he asked. “A lot of people said it was inappropriate for Stephen Colbert to be laughing with Sean Spicer,” he remarked.

Mocking Spicer again for still being on the job hunt, he added: “His credibility issues are continuing to follow him out of the White House even though he's joking about it in Hollywood.”

It wasn’t just cable news obsessed with the issue either. Over on ABC’s Good Morning America Monday, anchor George Stephanopoulos and Jonathan Karl also criticized Spicer for “joking” about “blatantly misleading the American people” while he was White House Press Secretary.

STEPHANOPOULOS: Listen, anybody can make fun of themselves, that’s a good thing but this is a pretty serious problem. Jon Karl sat in the White House briefing room every single day where Sean and other representatives of this administration simply didn’t tell the truth.

KARL: He showed he was willing to humiliate himself on a very big stage but he’s joking about the fact that he blatantly misled the American people on his first day on the job.

STEPHANOPOULOS: Not that funny. [chuckles]