Are the long, liberal knives of journalists out for Nancy Pelosi? The Democratic Minority Leader on Monday appeared on CBS This Morning and endured repeated questions about whether she is up to the job of facing down Donald Trump and the Republicans. After playing a montage of anti-Pelosi Democrats, Charlie Rose reminded, “You've been losing special elections, four of them, and people say it's because the Democrat Party, which you're a leader, has no message. Your only message is anti-Trump.”

The Minority Leader provided the typical spin that Democrats lost only by a little in each of the special elections. A worried Rose underlined, “But they lost.” Co-host Gayle King chided, “Why don't you think you should step aside?”

A few of the questions were less tactical and actually got to Democratic obstruction. On the ObamaCare repeal bill, guest co-host Margaret Brennan demanded, “But you don't think there's room to fix this legislation? You're saying out of hand” you reject it? 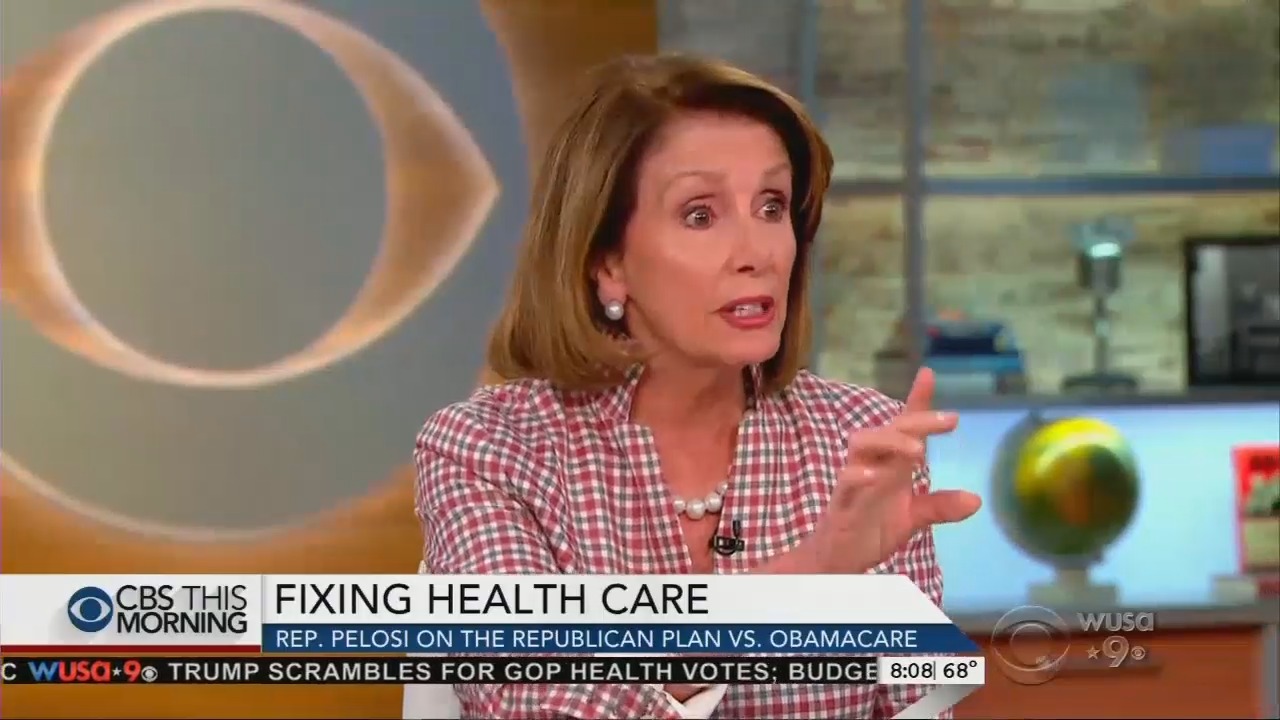 GAYLE KING: Is there anything in the Republican bill that you think you all can work with?

MARGARET BRENNAN: And willing to work?

PELOSI: Structurally, no. It's not a question of willing. Structurally this undermines Medicare in the long run.

CHARLIE ROSE: House Minority leader Nancy Pelosi became a member of Congress through a special election 30 years ago. She has led house Democrats for the last 14 years including the stint as the first female Speaker but the Democratic Party prompted some House colleagues to question her leadership. 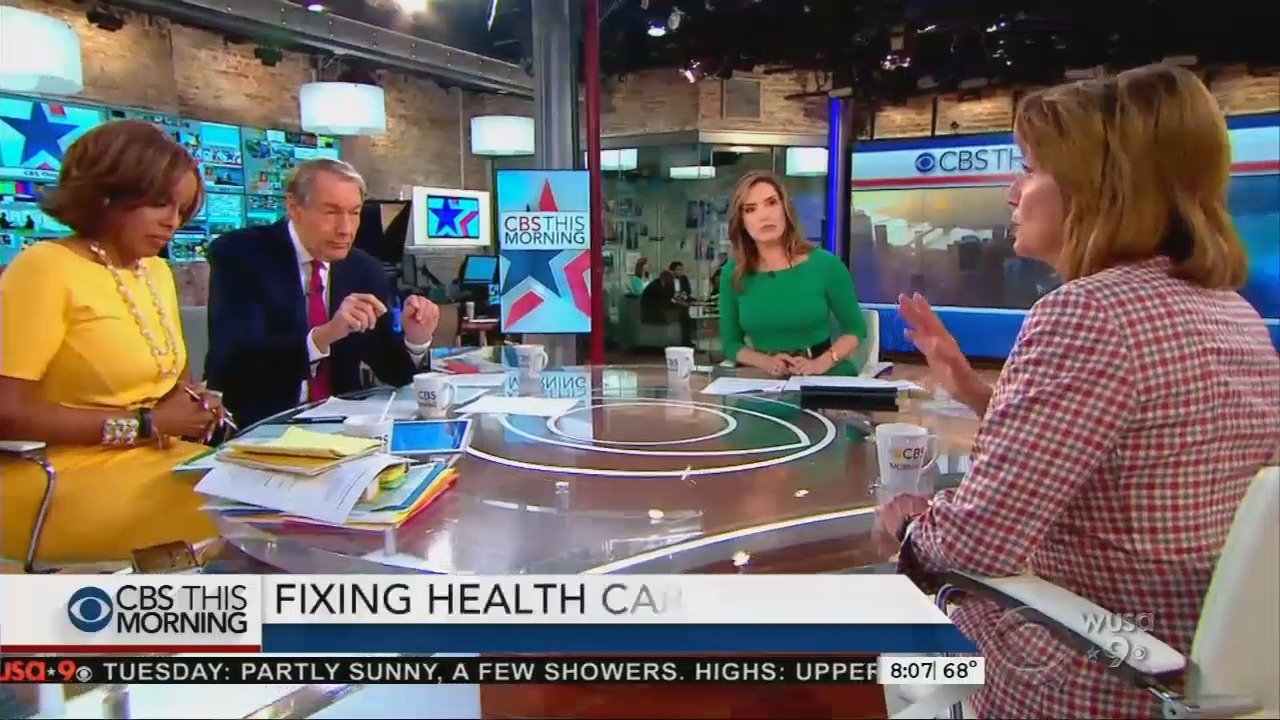 REP. KATHLEEN RICE (D-NY): Nancy Pelosi was a great Speaker. She is a great leader. But her time has come and gone.

SETH MOULTON (D-MA): I think it's time for challenge and these election results, frankly, show that.

REP. FILEMAON VELA (D-TX): If we're going to regain the majority in 2018, we have to have new leadership.

DON LEMON: Do you think Nancy Pelosi is many toxic than Donald Trump?

REP. TIM RYAN (D-Ohio): You know what? The answer is in some areas of the country, yes she is. That's the honset answer.

ROSE: You do want to respond?

PELOSI: I'm here and we're hearing from all these other people. They had their time on TV. This is such a small item. It isn't about me. Right now our fight is the Affordable Care Act. I always had a look right from the start.

ROSE: Let's look at this too. You've been losing special elections, and four of them, and people say it's because the Democrat Party, which you’re a leader, has no message. Your only message is anti-Trump.

PELOSI: No. That isn’t true. Let me just say these are four races we would have never chosen to go after. They were chosen by Donald Trump. Four races where double-digit lead for the Republicans in previous elections. We picked up 70 points. 25 in one race, 15, 20 like that in the four races. People in those states are very happy because we've pushed the Republicans very far back. Me? I like to win. But this was — I —  the people in Georgia worked very hard, Montana, all of those plaes and they made great progress leading up to —

ROSE: But they lost.

PELOSI: They lost. But, again, there are 70 races that are easier forus than any of those. We would have never chosen to go in. There was so much excitement in the country to act against the election in November. This isn’t— These people were against me last November. They started this before. The fact is —  the fact is this. I lead in ‘05 and '06 to become Speaker of the House. President Obama became President. He was our spokesperson for eight years. We just lost the election. We could write a message, but the fact is we need our members to write the message and they know full well that something we're working with the Senate to go forward.

GAYLE KING: Why don't you think you should step aside?

PELOSI: Let me tell you why I should stay instead, because I'm a master legislator, experienced in terms of knowing institutional memory of the Congress. If Hillary Clinton had won, I might have gone home. But with Donald Trump in the White House, with a Republican majority in both houses, no way.

MARGARET BRENNAN: After President Trump won, President Obama came out. I remember being at the White House. And he said Democrats are characterized as “coastal, liberal latte-sipping, politically correct, out of touch  folks. We have to be in those communities.” How do you do that in 2018 and win this election?

PELOSI: Well, he was just president for eight years. I don't think he was describing himself in that way.

BRENNAN: He was describing the challenge you have in 2018.

PELOSI: We always have a challenge. And that is, again, I take it back to the Affordable Care Act. So many people voted for it. Some of them voted for Donald Trump. So we have to— I say to people, it happens with your spouse as well, if you think you're communicating and they don't think you're communicating. So, it isn't about our agenda. It isn't even about our message. It's about our communication of it. And right now this week we're in a fight for our lies and the leaves of many people in our country because we must defeat what is going on in the Senate.

ROSE: You said you were a master legislator. Let's see your sense of where congress is. What kind of bill will come out of the Senate an we know that. Will the President and the Republicans get enough votes in the Senate to pass that?

PELOSI: I don't think anybody knows that right now. Maybe Mitch McConnell does. Right now at this moment on Monday we haven't seen the CBO report yet. We do know that the —  many more people — millions —  hundreds of thousands of people will die if this bill passes.

BRENNAN: But you don't think there's room to fix this legislation? You’re saying out of hand —

PELOSI: No, no. Let me be clear. Thank you for that question. The Affordable Care Act, we can work together

ROSE: The Republicans and Democrats can fix it.

PELOSI: Absolutely. That's what we had hoped that President Trump would want to do
from the start instead of sabotaging it. Some of the ills of it are because of the Republicans when they took power not renewing some of the things that were in there. And any bill that is passed, you see implementation and you know how you can improve it. But these bills systemically, structurally, they're very, very harmful to the American people. They will raise cost with fewer benefits. Have an age tax. If you're 50 —  nobody here, of course, under 64, they'll undermine Medicare. They'll throw millions of people, tens of millions of people off of —

KING: Is there anything in the Republican bill that you think you all can work with?

BRENNAN: And willing to work?

PELOSI: Structurally, no. It's not a question of willing. Structurally this undermines Medicare in the long run.

ROSE: So, if this bill passes and goes back to the House, can it pass in the House?

PELOSI: It depends. See, right now they're going to the right to pick up votes and if they pick up votes on the right, they may lose the moderates that they got I the House.

ROSE: It's great to have you here.