CBS to Elizabeth Warren: Are ‘Both Sides’ Responsible for Angry Rhetoric of Shooting?

Two days after a Bernie Sanders-supporting, Republican-hating gunman attempted to slaughter GOP members of Congress, CBS This Morning’s Gayle King on Friday asked Elizabeth Warren if “both sides” were responsible for the heated climate. The co-hosts also failed to press the liberal Democrat on some of her angry rants.

Speaking of the anti-Republican shooting, King offered this even-handed assessment: “There was so much acrimony in this country and so much hatred.” She wondered, “Do you think the dialogue we're having needs to be toned town on both sides? Do you think that contributed to the shooting that happened the other day?"

Additionally, the CBS co-hosts made no effort to press Warren on whether she contributes to the “acrimony.” This is the same woman, after all, who called Trump a “lousy, cheating businessman” and a “thin-skinned bully.” 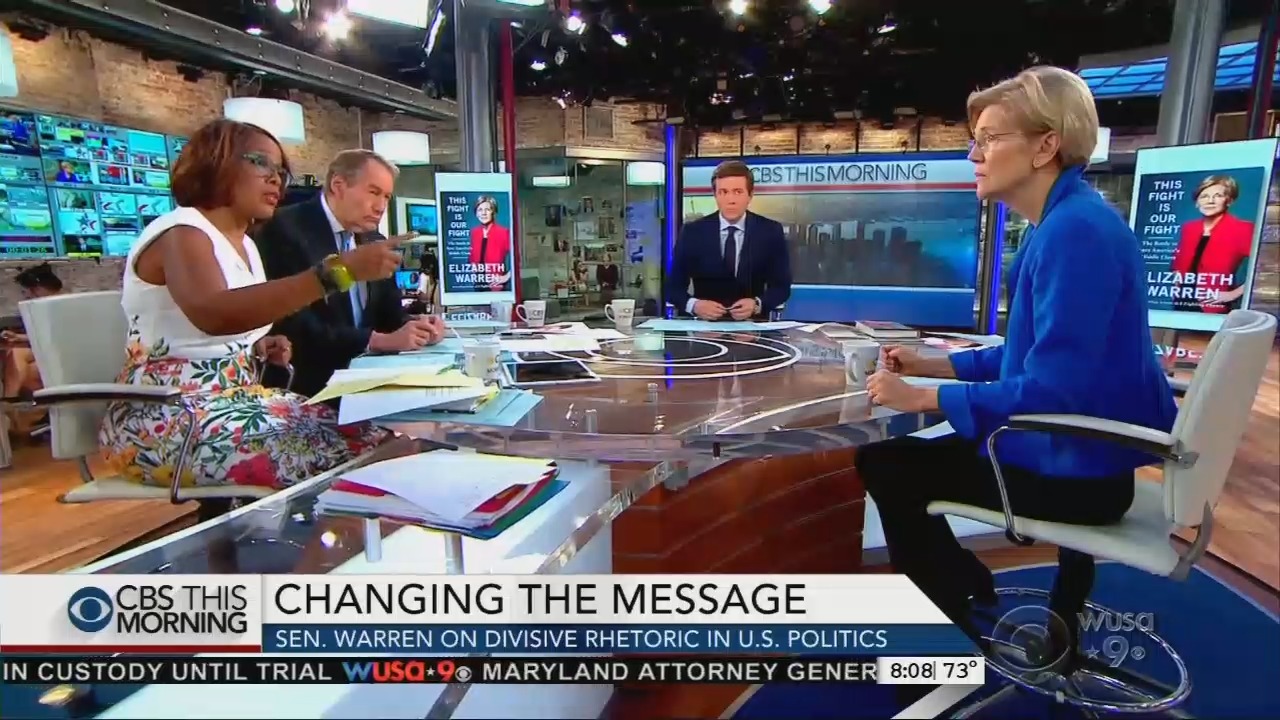 CHARLIE ROSE: Democratic Senator Elizabeth Warren is here. Her latest book is called This Fight Is Our Fight: The Battle to Save America’s Middle Class. In it, accuses the government of working for the wealthy and corporations at the expense of everyday Americans. Senator Warren, welcome back.

ELIZABETH WARREN: Thank you. It's good to be here.

ROSE: Let me ask you the broad question about what has happened in Washington in terms of the attack as well as what happened at the game last night. Is it possible, is it likely that somehow something very positive can come out of this? 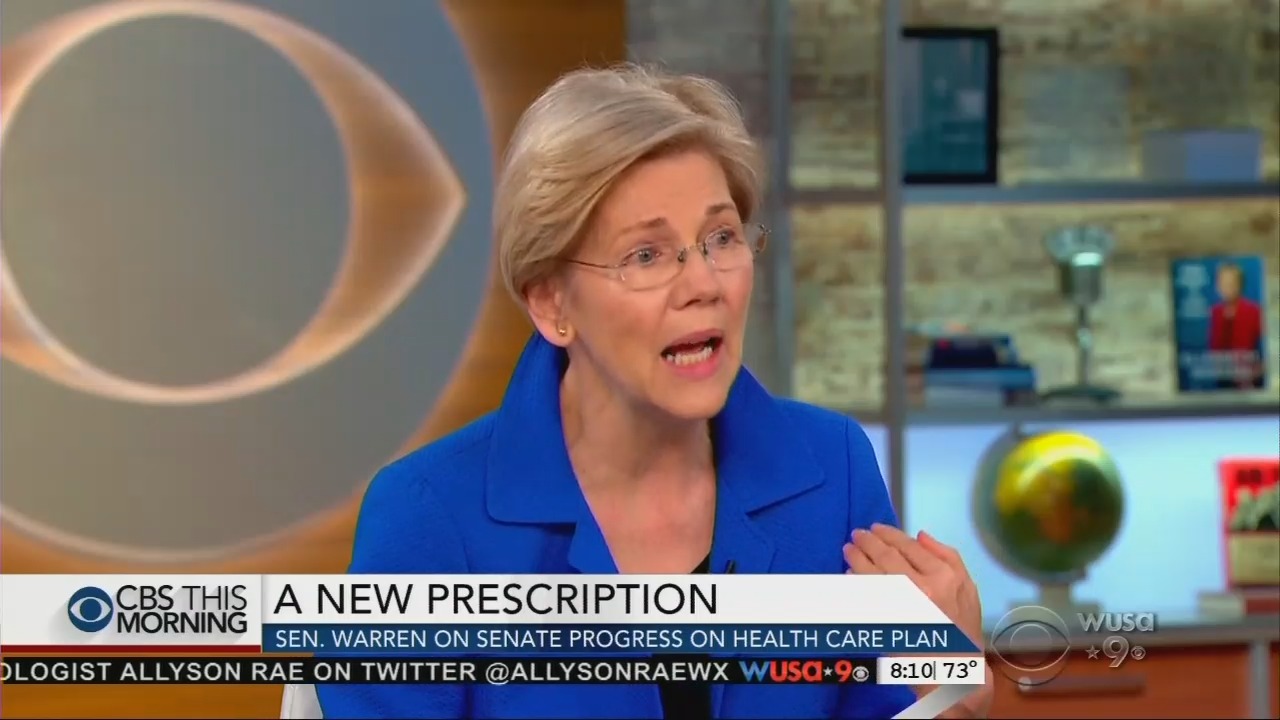 WARREN: It is always possible. We're human beings and this is what we hope for. It is our job, Republican, and Democrat, and independent. We're supposed to be there to try to make it a better country.

ROSE: So what will you do?

WARREN: I'm going to stay in the fight I am in. That's to make the government better for middle class families, for working families, for the working poor and everybody who just needs a chance to get ahead.

WARREN: I think that's exactly right. Because I think this is about values. And it really is about a sense of what is the job of government? Where is it we're trying to head? You know, there was a time when everything pretty much that happened in Washington was filtered through the lens of does it help build a middle class?  Does it help create opportunity for kids like me. I'm the daughter of a janitor who got a chance to go to college because America was investing in opportunities. I went to a college that cost $50 a semester. 1935 to 1980 GDP, goes up and 90 percent of America, everybody participates in growth. They get 70 percent of all the new income. 1980 forward, it just doesn't happen. The 90 percent doesn't participate in that growth. All of the growth goes to the top ten percent. That's not right.

GAYLE KING: You say that nobody who works full time should live in poverty. Yet they do.

WARREN: Yeah. And yet they do that and yet they do. That's exactly right. You know, U I'm somebody who lived this very personally. When I was 12 and my daddy had a heart attack and my mom had been a stay-at-home mom. My three brothers are off in the military. We were a paycheck-to-paycheck family and when that paycheck disappears, you learn pretty fast what that means. I remember the day we lost our car, we were about to lose our house, and my mom pulls on her best dress, walks to a Sears and gets a minimum wage job and that minimum wage job saved our house and it also saved our family. But here's the deal. Back when I was a kid, a minimum wage job would support a family of three. And the reason for that was because of the laws that were written in Washington. Today, a minimum wage job won't support a mama and a baby, won't let someone working full time rent a two-bedroom apartment anywhere in America. And the reason for that is because the minimum wage is now set in Washington with an eye on the profitability of McDonalds, the profitability of Walmart, not on what it takes for a family to survive.

KING: The passion that you feel for your position, the other side feels the same passion. And they say part of the problem, part of the cause, rather, of this shooting was the heated rhetoric on both sides, that people were so angry and so —  there was so much acrimony in this country and so much hatred. Do you think the dialogue we're having needs to be toned town on both sides? Do you think that contributed to the shooting that happened the other day?

WARREN: I through we all have to take responsibility for what we say. Do understand there's a lot where we try to continue to work together.