The Washington Post’s executive editor has convicted Donald Trump. One would assume the only solution is impeachment. Appearing on CBS This Morning, Tuesday, Marty Baron touted the Post’s war against the President. He concluded, “When I was coming out of high school, there was Nixon and Watergate. And so, I wasn't in the middle of that, obviously. But this feels like that in many ways.”

Richard Nixon was driven from office in the wake of impeachment inquiries and The Washington Post's reporting. Baron admitted this might not be a “perfect analogy, but what does his comment suggest the newspaper has in mind for Trump?

The interview included a lot of journalistic self-love as the CBS hosts thrilled over the “stunning” Post, saying it has “never been better.” Gayle King noted that the paper has been scooping its liberal competitor, The New York Times:

This has got to be a very satisfying feeling for you. You're very calm and very controlled. Aren't you guys over there doing the hula about what is happening? 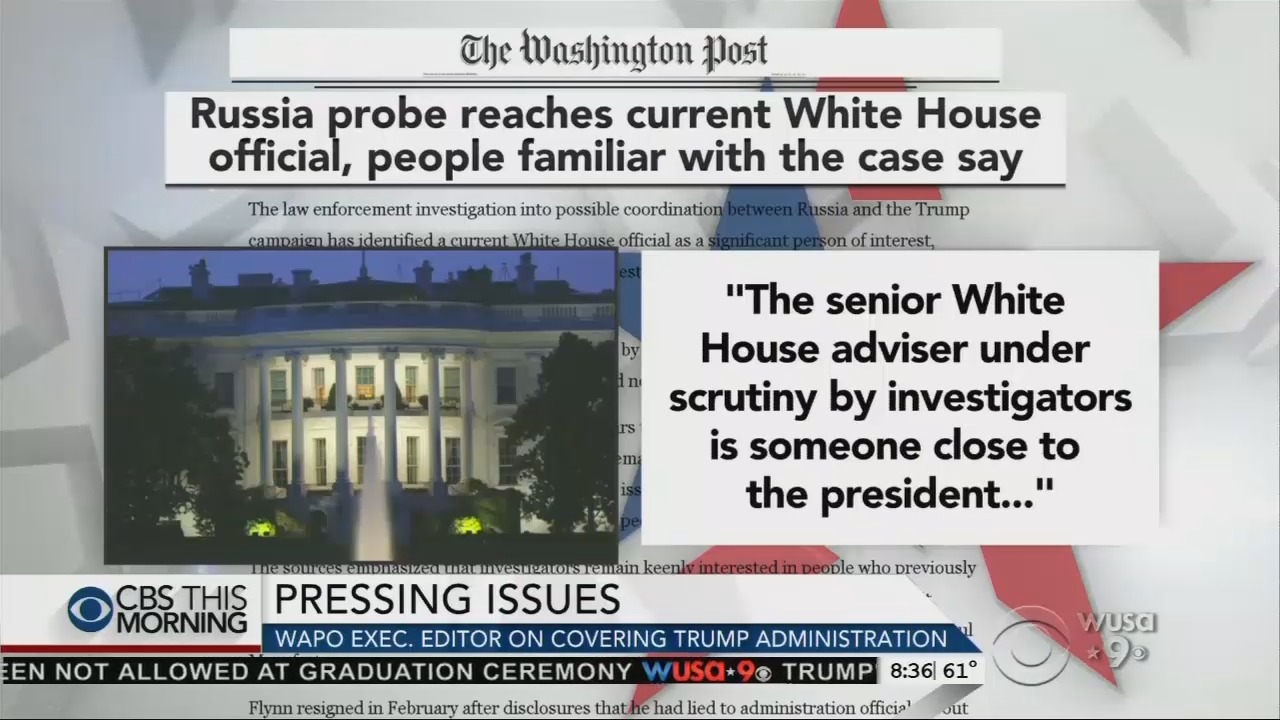 Assume for a minute that the Post has the goods on Trump and he’s actually guilty of crimes. “Satisfying?” “Doing the hula?” Would that be the reaction for such a tumultuous, difficult time for the country?

The best the CBS reporters could manage was for King to lightly broach the topic of relying on anonymous sourcing. She wondered, “Help us understand the leak process, how it operates at your place. How can you trust the people that are leaking stories to you?” King then followed up by cheering, “And don't you double check, triple check? It's not like you rely on just one source.” 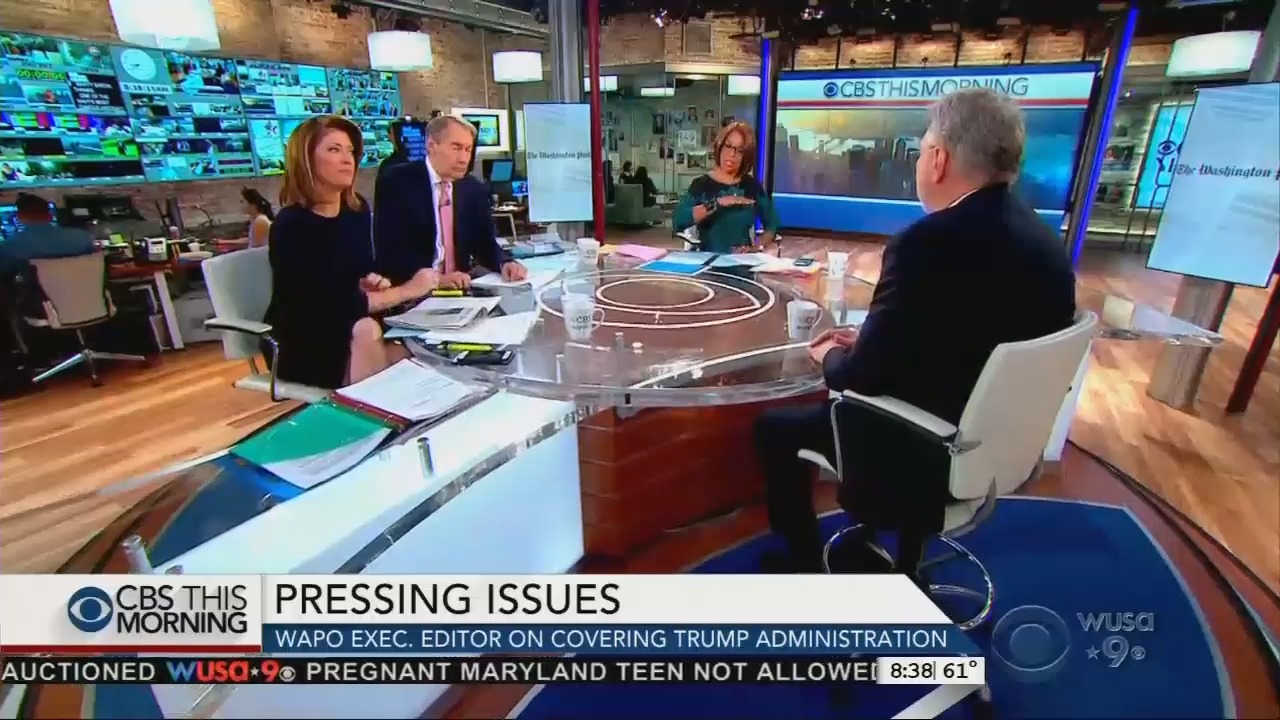 Nowhere in the fawning interview were examples of the Post getting things wrong when it came to investigating Trump. The MRC’s Brent Bozell and Tim Graham explained on May 16:

Since Trump won the election, the Post has been caught in a string of over-aggressive anti-Trump stories that were based on anonymous sources and turned out to be untrue. Just last week, the Post reported deputy attorney general Rod Rosenstein offered to resign in the wake of the firing of FBI director James Comey. Rosenstein denied ever doing such a thing. The Post also reported the FBI asked for additional resources for its probe of Trump campaign collusion with the Russian government. The acting FBI director testified under oath that was not true. It's a shame Congress doesn’t get to put the media’s anonymous sources under oath.

At one point, Baron asserted, “This is an administration, like every administration, requires scrutiny and we have more people probably covering the White House now than I think The Washington Post ever has had.” Where was that scrutiny during the Obama administration? Where were all those investigative reporters over that eight year span?

This type of fawning coverage of other journalists is common for CBS. On May 16, the hosts talked to the publisher of Rolling Stone about the magazine’s 50th anniversary. King explained away the publication’s fake claim of rape at the University of Virginia, excusing the false reporting, “It happens so rarely to you.”

CHARLIE ROSE: Political news has dominated headlines from the 2016 campaign into the beginning of President Trump's administration. The Washington Post has been behind several of the biggest stories. They include the leaked Access Hollywood video and the Justice Department's concern about Michael Flynn. The paper won a Pulitzer Prize for its investigation into Mr. Trump's charitable donations. The newspaper also broke the story about President Trump's revelation of highly classified information to Russian official. And yesterday, the Post reported that Trump asked top intelligence officials to deny evidence that his campaign colluded with Russia. Marty Baron is executive editor of The Washington Post and we’re pleased to have him at this table. Welcome. 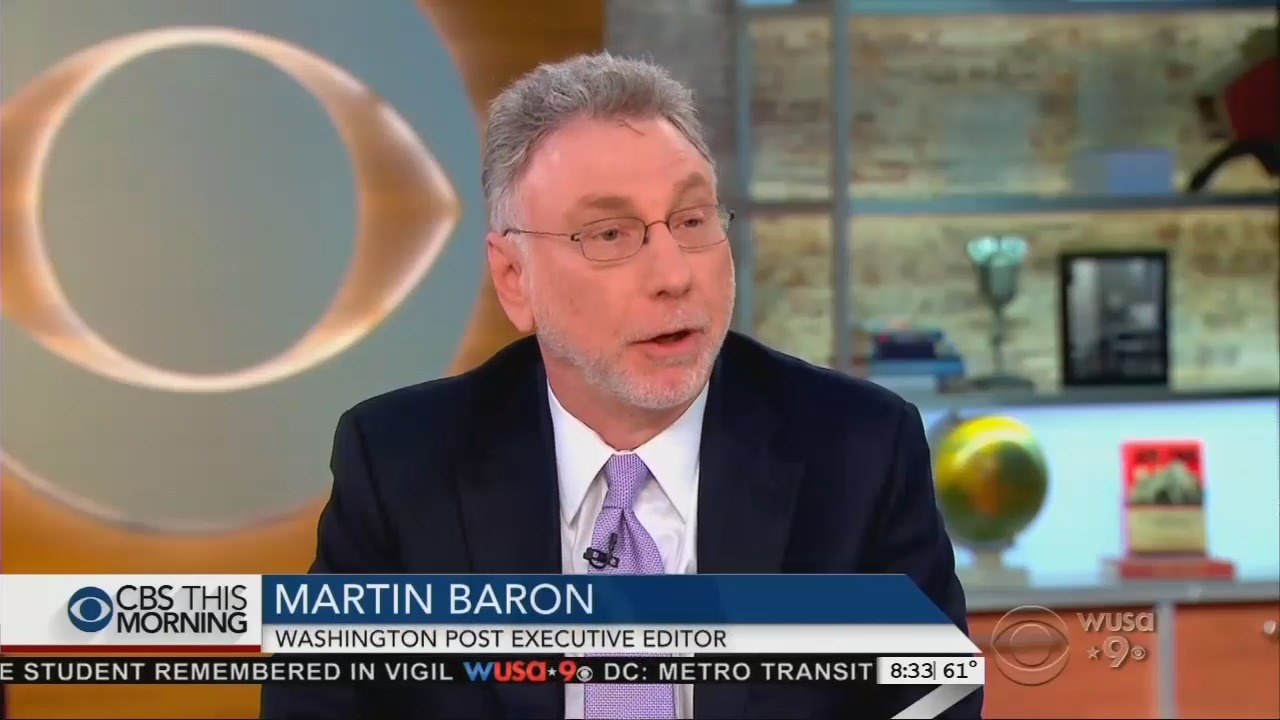 ROSE: What’s happened to The Washington Post? I mean, everybody is saying it's never been better and you’ve got remarkable reporting.

BARON: Well, thank you. We appreciate that we have a great team. Great team in the newsroom. Very proud of what they are doing.

ROSE: Has the addition avenue ownership made a difference?

BARON: Yeah. Jeff Bezos is now our owner. He's owned us for about three and a half years. He's brought not only financial capital, but intellectual capital. I think he has helped us adjust to the digital age and that’s been — He’s been a tremendous owner and stood behind us.

ROSE: Look at today's news. I mean, how does a paper cover this kind of story?

GAYLE KING: Have you ever seen this many leaks, Marty, the President has called you all fake media, leaks that the media is out to get him. Help us understand the leak process, how it operates at your place. How can you trust the people that are leaking stories to you?

BARON: Well, look, there are a lot of people in government who are concerned about what's happening. They feel it's information that the public needs and deserves to know. Our reporters have a lot of experience. Over the many years they've cultivated sources in government. People who know them. They know the source. These are reporters on our staff who have a lot of experience and expertise. And so, when people want to talk they talk to us.

KING: And don’t you double check, triple check? It’s not like you rely on just one source.

BARON: Absolutely. We do not rely on one source. We always have to have extra confirmation of anything. In many instances, the White House has said something that was not true and then a day later or two days later who confirms it? The President of the United States actually confirmed our reporting.

NORAH O’DONNELL: Marty, this is another stunning piece of reporting, an excellent original reporting about the president asking his intelligence chiefs to deny collusion. One of the things I read between the lines is he asked them to do it just days after Comey testified. So there's this very short period of time where the President is ramping up his activity, not only against Comey, but the intelligence chiefs. On the question of leaks, though, just to contextualize about that, people are not calling The Washington Post giving you information. Your reporters are asking questions and then they give up information, correct?

O’DONNELL: And they trust them. So, let me ask you this: You're the editor. What questions remain unanswered for you?

O’DONNELL: And yet, on Friday your paper, the Post, reported that a current White House official is a significant person of interest in the Russian investigation. But you didn't name who that person is. Do you know who that person is?

KING: If you could just give us the initials, please.

BARON: If we can confirm —  this is what we do. When we can't confirm, we don't report.

ROSE: So what do you need to confirm?

BARON: We need an additional source or two.

ROSE: So you do have sources that said it's a certain person. You need that to be confirmed by other people.

BARON: We need more confirmation. That’s about all I can say.

O’DONNELL: What does that mean? There's a single person who is a person, a significant person of interest?

ROSE: A broader question, what is this feel like for you? You're in Boston where they made a remarkable movie of what happened when you were editor there. Think about this: I mean in terms of — you've lived through a lot of political drama. Has it ever been, in your feeling, in you judgment, anything like this?

KING: I like Charlie's question, though, because I think there seems to be such a competition between The New York Times and The Washington Post. Norah pointed out in the green room that it's something The New York Times is quoting The Washington Post. This has got to be a very satisfying feeling for you. You're very calm and very controlled. Aren't you guys over there doing the hula about what is happening?

BARON: No. We really don't do that. We're very serious about what we do.

ROSE: Great to have you.

O’DONNELL: Your speech at Penn State is a must read for everybody and for certainly journalists. Thank you for being here. Congratulations to all the great reporters at the Post.