MSNBC on Wednesday touted the “extremely close” “symbolic” “victory” for Democrats in Georgia’s special election, seeing the failure to win as a “sign of hope.” MSNBC Live host Stephanie Ruhle also chastised Trump, saying, “President Trump weighing in, going in on a new tweet, really a tirade against the Democrat.”

Hyping John Ossoff’s failed effort to win outright against 11 Republicans, Ruhle noted the Democrat “did not win the 50 percent needed to take the traditionally red state, but he came extremely close.” She added, “Democrats across the nation, they're telling a story that this is a huge victory or a symbolic one.”

Reporter Ron Allen explained, “Well, I think it's more than symbolic, it's a sign, they hope, of things to come.”

The network journalists have been doing their best to salvage the non-win. Good Morning America spun it as an “emotional victory.” Just two days ago, on April 17, hopeful ABC reporters insisted that a win by Ossoff could mean a “real chance” Democrats will take Congress in 2018.

NBC’s Today described Tuesday night as an “ominous sign” for the Republicans.

A partial transcript from the MSNBC segment is below: 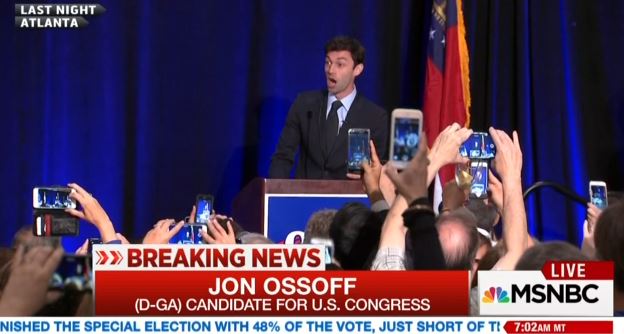 STEPHANIE RUHLE: We're going to begin this morning with that wake-up call for both Republicans and Democrats. The local race with huge implications and it could not have been closer. The Democrat in Georgia's 6th congressional district race, Jon Ossoff, did not win the 50 percent needed to take the traditionally red state, but he came extremely close. Now that battle only gets hotter with a runoff scheduled for June and President Trump weighing in, going in on a new tweet, really a tirade against the Democrat. We've got a great team of correspondents and guests here to break it all down. I want to take you first to NBC's Ron Allen. He's in Atlanta. Ron, Jon Ossoff did not get enough votes for an outright win but Democrats across the nation, they're telling a story that this is a huge victory or a symbolic one, I guess, for them, but he didn't win.

RON ALLEN: Well, I think it's more than symbolic, it's a sign, they hope, of things to come because this is a very red district and you have a candidate who came out of nowhere, a lot of national support, a lot of national money, Jon Ossoff, and he got very, very close. Through the night it seemed that he might actually pass the 50 percent mark, but as more returns came in, his tally fell below that. Here is the final numbers, look at the board there. 48.1 percent for Ossoff, and Karen Handel, the Republican who got the most votes at 19.8 percent and double the next contender in this huge field of 18 candidates. So Ossoff is feeling good. The Democrats are feeling good, but the Republicans are feeling good as well. Because they feel that once it's a one-on-one race that Handel will prevail. But before we get to that, here's Jon Ossoff last night, essentially, declaring victory.

JOHN OSSOFF: We have defied the odds, we have shattered expectations. So bring it on.

ALLEN: Now, the Republican, Handel, is a very well-known politician in this state. She's run for state-wide office a couple of times and lost, however, in primaries. She's also been a county commissioner so she has a lot of name recognition and a lot of support. She's very conservative. So, she expects all those things to put her over the top. Again, once she's not running against 11 other Republicans. But the Democrats are feeling very good about this because they see a dist th changing. There are a lot of white, well educated professional people here, it's a fairly upscale district north of Atlanta that's growing and changing. It's more diverse now than it was. Tom Price won here by a huge margin but he was a very popular incumbent so the Democrats would argue that skews his performance then. Donald Trump won by just a small amount, a percentage point or two over Hillary Clinton. So the Democrats see potential here. If they can win in a place like this, win the House, they have to win places like this. So again, a big night for the Democrats but the Republicans still feel pretty confident about their chances 60 days from now in the runoff.