Sean Spicer’s Hitler gaffe on Tuesday was dumb and embarrassing, something he’s since admitted. Yet, that wasn’t enough for the journalists on Wednesday's CBS This Morning. They hyped attacks from an organization that smeared the White House press secretary, calling him a “Holocaust denier.” The Anne Frank Center, which famed lawyer Alan Dershowitz has derided as “tiny” and "phony,” also called for Spicer to be fired. This neatly ties in with what Nancy Pelosi is demanding. Of course, CBS also touted her remarks.

Reporter Chip Reid explained Spicer’s sloppy attempt at comparing Syrian President Bashar al-Assad to Hitler and the Trump aide's efforts to make Assad seem worse than the German dictator. Reid highlighted, “The backlash against Spicer was swift and harsh. In a statement, the Anne Frank Center said Sean Spicer's comments were ‘the most evil slur upon a group of people ever heard from someone at the White House.’”

Now, does it seem more likely that Sean Spicer is a Holocaust denier or that he simply fumbled for an ill-conceived analogy?  Famed lawyer Alan Dershowitz appeared on CNN, Tuesday, to denounce the smear:

DON LEMON: Steven Goldstein, who is the executive director of the Anne Frank Center issued this statement as scathing. He said, "On Passover, no less, Sean Spicer engaged in Holocaust denial, the most offensive form of fake news imaginable, by denying Hitler gassed millions of Jews to death," said executive director of the center Steve Goldstein in the statement. "Spicer's statement is the most evil slur upon a group of people we have ever heard from a White House press secretary." Do you think he was engaging in Holocaust denial?

DERSHOWITZ: No. And of course, what this guy, who claims to be the head of the Frank Center —  who is a total phony, there's no such thing. It's a minor institution. It has no credibility within the Jewish community. He's constantly trying to get headlines by overblowing everything. What happened here is the guy screwed up. And he apologized. He apologized from his heart. And I'm prepared to give him a pass on this.

(The Anne Frank Center previously targeted actor Tim Allen for a joke he made on late night TV. The group does not appear to have a history of similarly calling out liberal entertainers.) 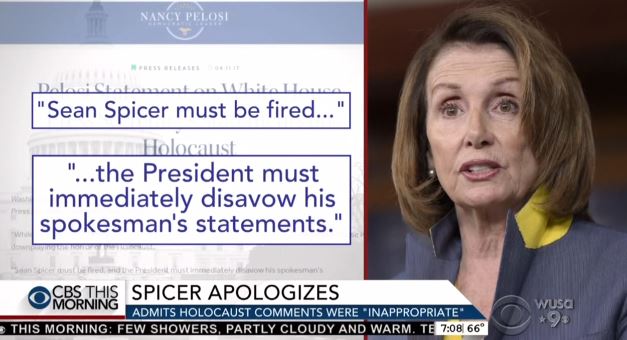 On CBS, Reid also pushed Pelosi’s efforts to get Spicer fired: “House Democratic Minority Leader Nancy Pelosi said Spicer and called on the President to disavow his statements.” Over on NBC’s Today, Peter Alexander echoed this talking point: “The top Democrat in the House, Nancy Pelosi, calling for Spicer to be fired.” Alexander pressed Spicer, “Nancy Pelosi says you should be fired. Is your job safe?

A transcript of the CBS This Morning segment, which aired on April 12, is below:

CHARLIE ROSE: The president's press secretary has apologized for trying to compare Syrian President Assad and last week’s poison gas attack to the Nazis. Sean Spicer told reporters that serious use of chemical weapons crossed a line that even Adolf Hitler never did. The statement in the midst of Passover did not recognize the Nazi's use of poison gas to kill millions of Jews and other prisoners. Chip Reid is at the White House. Chip, good morning.

CHIP REID: Good morning. A big part of the White House press secretary's job is to clean up after the President. But in this case, Sean Spicer is trying to clean up his own mess.

SEAN SPICER: My comments today did not reflect the President’s, were a distraction from him and, frankly, were just insensitive and wrong.

REID: White House Press Secretary Sean Spicer swiftly apologized for statements he made at the podium in which he said Adolf Hitler did not use chemical agents on his own people.

SPICER: We didn’t use chemical agents in World War II. You know? You have someone as despicable as Hitler who didn't even sink to using chemical weapons.

REID: When asked to clarify, Spicer stumbled, seeming to forget the millions who died during the Holocaust in concentration camps. 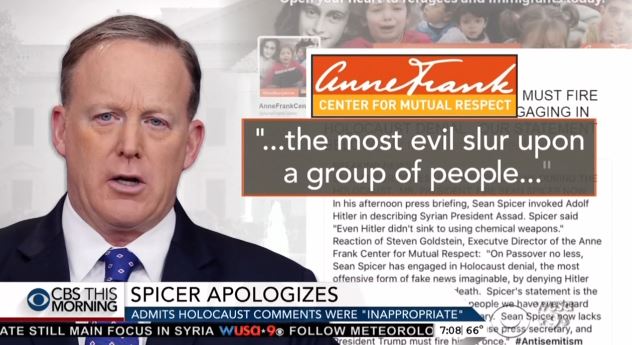 SPICER: He was not using gas on his own people in the same way that Assad — I mean, there is clearly— I understand your point. Thank you. I appreciate that. There was not in the — He brought them to the Holocaust centers. I understand that.

REID: At the Pentagon Defense Secretary General James Mattis succinctly spelled out what was Sean Spicer was trying to say.

REID: The backlash against Spicer was swift and harsh. In a statement, the Anne Frank Center said Sean Spicer's comments were “the most evil slur upon a group of people ever heard from someone at the White House.” House Democratic Minority Leader Nancy Pelosi said Spicer and called on the President to disavow his statements.

ARI FLEISCHER: I wish Sean hadn't said it, but it's a terribly, terribly hard job.

REID: Ari Fleischer, White House press secretary under George W. Bush said the only person who can decide if Spicer stays or go is the man he represents.

FLEISCHER: Sean works for Donald Trump and so long as he has the President's confidence, it's not an issue.

ROSE: The president has not commented on spicer's gaffe, but he'll have a chance to do so later today.