CBS This Morning on Tuesday downgraded the lifetime confirmation of a Supreme Court Justice to a bit story within a report on alleged feuding between White House aides. The swearing in ceremony of Neil Gorsuch on Monday simply became the subtext for Major Garrett to fixate on Steve Bannon and Jared Kushner: “The Rose Garden swearing in of Supreme Court justice Neil Gorsuch offered a tranquil counter point to weeks of White House infighting President Trump has ordered to end.”

Instead of focusing on the Trump confirmation victory, Garrett shifted, “The Gorsuch confirmation transcends the pitched battle between Bannon and Kushner over ideology, access and clout.” From that point, it was all Bannon/Kushner feuding.

In a clip of him talking to Sean Spicer, Garrett demanded, “What is the President's perspective on the ability, the current ability of his senior advisors to work as a team?” The total amount of time devoted to Gorsuch in the two hour program was 40 seconds. 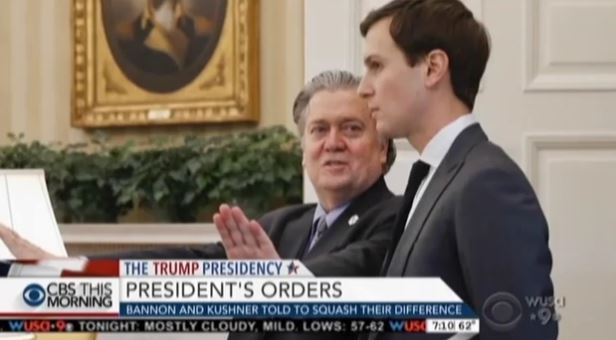 ABC’s Good Morning America and NBC’s Today (six hours of air time), completely skipped the swearing in. On Monday morning, during the live ceremony, wet blanket ABC repeatedly reminded viewers that Democrats felt the Gorsuch seat was “stolen from them.”

On Monday’s evening news, the networks similarly downplayed the justice, who could serve for 30 years or more. As the Media Research Center’s Nick Fondacaro reported, “ABC gave Gorsuch’s swearing in a mere 20 seconds of airtime, CBS and NBC gave it 23 and 25 seconds, respectively.” 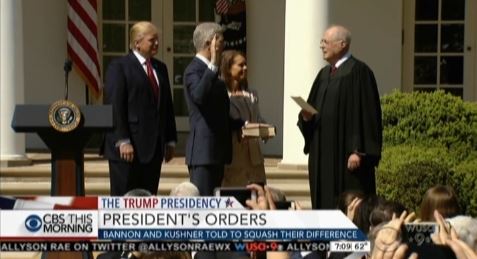 CHARLIE ROSE: President Trump meets with top military leaders tonight. He is telling two other key advisors, Steve Bannon and Jered Kushner to stop fighting. The President said nothing about that controversy yesterday when new Supreme Court jut Neil Gorsuch was sworn in. The ceremony marked the end of a more than year-long battle to fill that seat on the high court. Major Garrett is at the White House with the reported high level truce among his top advisors. Major, good morning.

MAJOR GARRETT: Good morning. All quiet in the west wing. That's the public line anyway. For the first time in weeks, it appears to be valid because President Trump through his chief of staff ordered his top warring advisors populist Steve Bannon and multimillionaire son-in-law Jared Kushner to cool it and cool it now.

DONALD TRUMP: And I got it done in the first 100 days. That's even nice.

TRUMP: I always heard that the most important thing that a president of the United States does is appoint people.

GARRETT: The Gorsuch confirmation transcends the pitched battle between Bannon and Kushner over ideology, access and clout. [To Sean Spicer.] What is the President’s perspective on the ability, the current ability, of his senior advisors to work as a team?

GARRETT: Late last week, Chief of Staff Reince Priebus ordered a face-to-face truce between the two senior advisors. Matters came to a head when Bannon opposed the missile strikes in Syria and Kushner supported them. Bannon has steadily lost ground to Kushner in recent weeks. His fall started with a clumsy rollout of the President’s travel ban executive order, which federal courts blocked and the White House abandoned. Then the ObamaCare repeal failed while Bannon worked on negotiations. And last week, Mr. Trump removed Bannon from the National Security Council. Kushner, meanwhile is leading key White House task forces, traveling to Iraq with the chairman of the Joint Chiefs of staff and planning head of state visits, including the Mar-a-Lago summit with Chinese President Xi Jinping.

IVANKA TRUMP: My father speaks for himself.

GARRETT: In an interview with CBS This Morning, Ivanka Trump, Kushner's wife and also a senior adviser to the president, downplayed the west wing drama.

IVANKA TRUMP: I do think we have a lot of different viewpoints at the table. But they're not at odds with one another.

GARRETT: Bannon sees Kushner and allies as globalist Democrats while Kushner regards the Bannon faction as harshly nationalist and Bannon himself, even, a bit vengeful. But this uneasy peace appears to be holding. One outside White House adviser described it as a mix between “Can’t we all just get along” and “Don’t taze me, bro.” Norah?