What a difference a day makes. CBS This Morning co-host Gayle King on Wednesday grilled Ivanka Trump on being “complicit” in her father’s administration, one that many are “very afraid” of. This contrasts to the fawning interview with another first daughter, Chelsea Clinton, on Tuesday. For that, fan girl King gushed over the younger Clinton’s political prospects: “Are you running? Are you running? Are you running?”

Yet, on Wednesday, King demanded that Trump justifying serving in her dad’s White House, lecturing, “You hear the phrase complicit, that Jared and Ivanka are complicit in what is happening to the White House.... What do you think about that accusation?”

Complicit? The dictionary definition of that word is “choosing to be involved in an illegal or questionable act.”  Earlier, the journalist railed against Ivanka for apparently not denouncing conservative policies. Citing “critics,” she wondered, “Where is she on Planned Parenthood? Where is she on gay rights? Where is she on the rights of women? Where is she on climate change?” 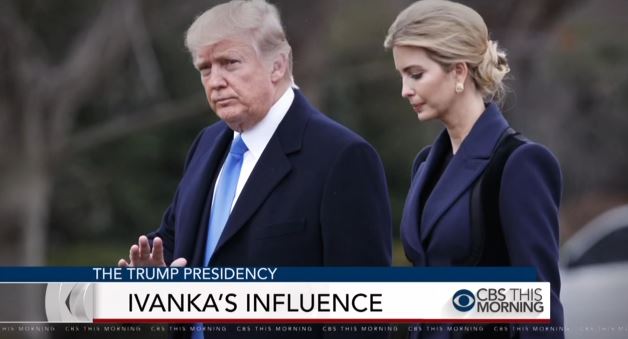 The interview, nearly 15 minutes over three segments, gave King time to hammer that question over and over: “Can you give us an example of something you disagree with [your dad] on and that you think by speaking up to him it made him change his position or soften his position?”

Citing those mysterious “critics” again, King pushed the Trump administration as scary: “There are critics who are very worried and very afraid. Who are concerned about the direction that country is going in. And what do you say to those people?” 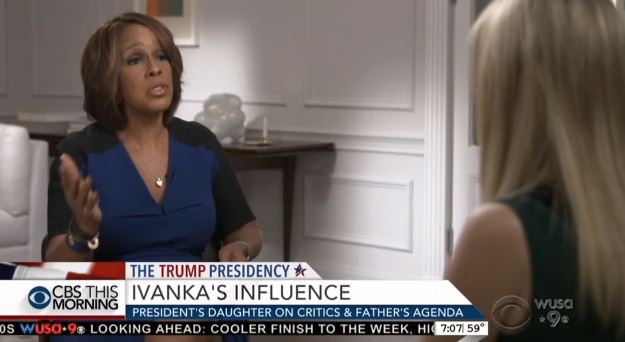 In contrast, Chelsea Clinton on Tuesday endured no such grilling. Her mom’s private e-mail server never came up. The Clinton Foundation and its sketchy donor base never came up. Instead, Charlie Rose breathlessly wondered, “The question everybody wants to know, how is your mother?” He added, “Do you think [your mom] will run for public office again?”

It wasn’t any better during the presidential campaign. In 2015, the CBS This Morning journalists lauded the younger Clinton’s as a grounding “reality check” for her mom.

A transcript of the first segment is below:

GAYLE KING:  Another recent poll finds a more popular member of the administration is the President's daughter Ivanka. She moved to Washington with her family after the election. She and her husband Jared Kushner have both taken on senior roles in the Trump White House. In an interview that you'll see only on CBS This Morning, Ivanka Trump told us her unprecedented position, assistant to the president has opened the door for her to have a major impact. When you spoke with 60 Minutes, you said it was your intention to be a daughter, that you were not going to play a role in the administration. What changed your mind?

KING: What will you be doing?

KING: You say that you're your father's daughter and we all get that. You also talk about the critics, and you have a couple, that say why isn't Ivanka speaking out? Where is she on Planned Parenthood? Where is she on gay rights? Where is she on the rights of women? Where is she on climate change? It's like you're being held personal accountable for not speaking up. What do you say to your critics?

KING: How much of a learning curve is it for you, for your father, for the Trump administration?

KING: On the other side, though, there are critics who are very worried and who are very afraid, who are concerned about the direction that country is going in. And what do you say to those people?

IVANKA TRUMP: We live in a very polarizing time.

KING:  Do you think your dad contributed to that? To the polarization?

TRUMP: This predates my father. But I think the election highlighted for people just how divided this country was.

KING: I see many headlines that say Ivanka and Jared Kushner are the moderating force in the White House. They have the president's ear. Who is it that tells him the hard truths? Is that you?

KING: Not necessarily social media, but just speaking up about things that —

TRUMP: I do. I speak up frequently. And my father agrees with me on so many issues. Where he doesn't, he knows where I stand. But it's not my administration.

KING:  Can you give us an example of something you disagree with him on and that you think by speaking up to him it made him change his position or soften his position? Are you comfortable with that?