Chuck Todd and the other journalists at NBC are openly fuming that Donald Trump continues to call out the biased coverage of his administration. During Thursday’s press conference, an angry Todd tweeted, “This not a laughing matter.  I'm sorry, delegitimizing the press is un-American.”

He later whined, “Press bashing may feel good to folks but when it's done by people in power, it's corrosive. Take off your partisan hats for a second.” During live coverage, Lester Holt chided, “It was contentious. It was ugly at moments and we haven't seen anything like it.”

Talking to Holt, Todd declared, “Look, this is a president that appears to be in a bunker mentality right now, whatever that is.”

Finally, the journalist went back to a cliche, comparing Trump to Nixon during Watergate: 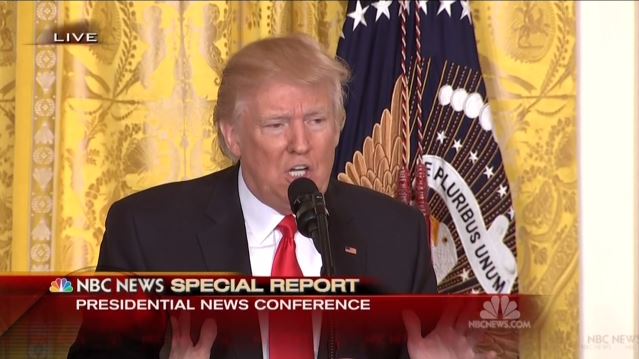 A lot of this press conference had to do with the President airing grievances about the press and we've got to remember what this is. It's a political tactic. It's one that's a familar one, but he is going at it in a way we haven't seen a president do since Nixon and those early ‘70s.

On Wednesday, disgraced journalist Dan Rather insisted that Trump’s “lies” could be bigger than Watergate.

A partial transcript of NBC’s post-press conference coverage is below:

LESTER HOLT: President Trump concluding about an hour and ten minute-long session with reporters in the East Room today, continuing his attacks on what he considers unfair media coverage. A lot of pent up questions over reporting about Russia, reporting about General Flynn who the President acknowledged he fired for giving false information to the Vice President. It was contentious. It was ugly at moments and we haven't seen anything like it. Let's bring in right now moderator of Meet the Press and our political director Chuck Todd. Chuck, give me your thoughts. 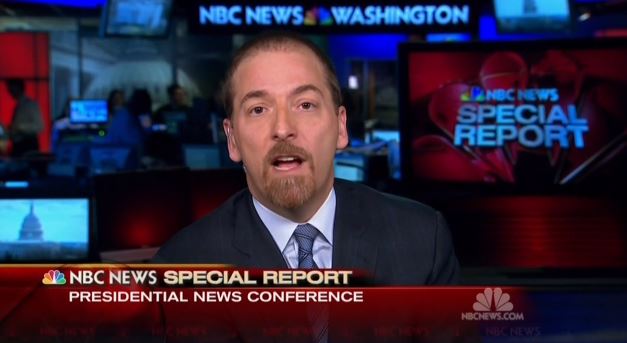 CHUCK TODD: Look, this is a president that appears to be in a bunker mentality right now, whatever that is. Look, this was a strategic decision, very explainable at a time when a lot of people are questioning what's happening in this White House. Do they have command and control of this situation. You have Capitol hill Republicans that are starting to get more comfortable criticizing this administration, getting nervous about the Russia story, comfortable about dumping on some of his cabinet picks. So the point of today, before this presser unfolded, Lester, was to try to offer some reassurance, at least to party leaders, reassurance to Capitol Hill. I don't think his performance today is going to reassure those skeptical Republicans on Capitol Hill that are getting more nervous by the day. 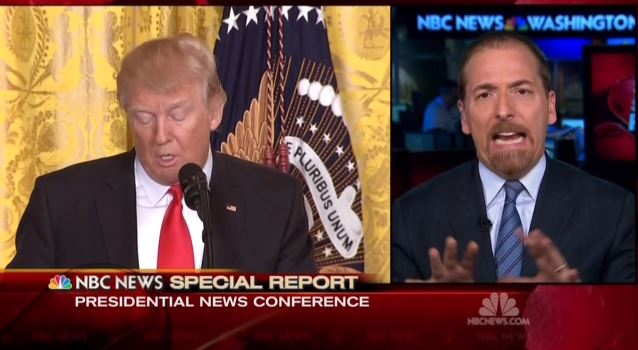 His Russia answers at times, he was twisting himself into a pretzel in not answering both the substance and the charge on the questions that have to do during the campaign with Russian interference in the election. But also just an odd rationale when he was asked by our colleague over at CBS Major Garret about some of the actions that the Russians have taken that have been aggressive and somewhat antagonistic of the United States and he had this weird explanation about what Putin may be thinking right now. So I don't —  if this press conference was intended to calm the waters, I think it did the exact opposite. I was hearing during this press conference from some Republicans, from some folks on Capitol Hill going —  just shaking their head going, what is he doing? What is he saying? Those were among the type of reactions I was getting real time in watching this.

TODD:  A lot of this press conference had to do with the President airing grievances about the press and we've got to remember what this is. It's a political tactic. It’s one that’s a familar one, but he is going at it in a way we haven’t seen a president do since Nixon and those early ‘70s. But this is a tactic he wants. He kept bringing up Hillary Clinton. I think he misses running against her. If he can't run against her, he wants all of the bad stories to be grouped into the country's collective anger at some member of the press corps. So that, to me, was a deflect, defensive mechanism that he was trying to do and it can rally his own troops for a while, blaming the press is a popular thing among some in the conservative base. But to do it almost on every answer over time, it's not playing well on Capitol Hill at all and over time it's going to start hurting him with skeptical voters that he got, people that weren't big fans of his but voted anyway, they'll be the first to leave if he continues to do this.