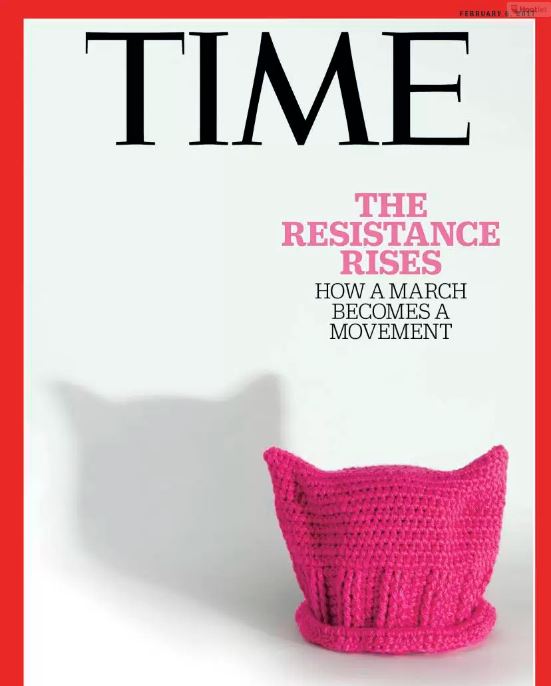 The journalists at Time magazine embraced the Women’s March on Washington and preemptively hyped it with this front page cover: “The Resistance Rises: How a March Becomes a Movement.” The February 6 cover featured an image of the so-called “pussyhats” worn by the liberal protesters.

Writer Karl Vick immediately adopted the anti-Trump tone of his subject, saying of the march: “There is no precedent in U.S. history for the show of collective outrage that answered Trump’s Inauguration. But then, there is no precedent for Trump, either: impetuous, thin-skinned and, for his trouble, entering office facing a grassroots opposition that heated up faster than a cup of ramen.”

He continued, highlighting the “terror” felt by protesters:

The face of that Democratic opposition–some call it the resistance–is female, which is to say it’s a face that as a private citizen Trump liked to judge on a scale of 1 to 10, and as a candidate measured by worthiness of his sexual attention. The billionaire made the 2016 presidential campaign about women even before Hillary Clinton won the Democratic nomination, sliming the Republican primary field by insulting the looks of its only female candidate (“Look at that face!”) and then moving on to Ted Cruz’s wife. So it was that the Women’s March–marches, really, as demonstrations were logged in more than 600 U.S. locations–became the occasion for recovering, in the space of just a few hours, spirits that since election night had spiraled into deep troughs of despair, dread and worse. 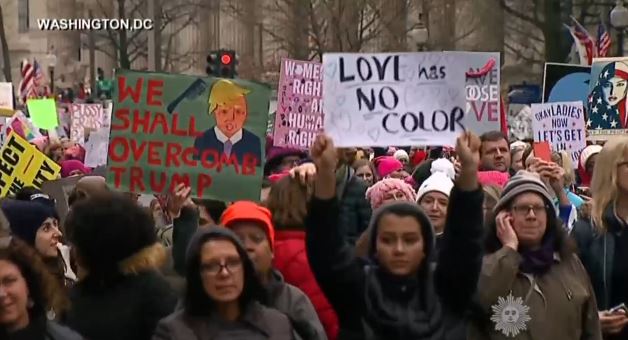 It doesn't seem likely that the January 27, 2017 March for Life will get similarly supportive coverage.

Later, Vick analogized the potential new movement to that of dealing with a four year-long funeral:

In a time of unexpected loss, there's an instinct to keep busy. How many dishes are washed and lawns mowed after a death in the family? Who isn't happy for the distraction? But if the grave is eternal, a presidential term lasts just four years. There are midterm elections in 2018. The entire House of Representatives will have to stand--and a third of the Senate. There's work to be done--the collective Republican majority hovers near a seven-decade high--and the question hanging over the Mall after the buses headed back home was: Where do we go from here?

After repeating some of the signs, the journalist hailed:

The signs were as bawdily exuberant as the crowds, which inevitably skewed activist but included many who had never demonstrated before, and who experienced in the gatherings both a stirring well of fellow feeling and sudden momentum. People who were at Woodstock said, Yeah, it was great, but the real thrill was stopping for gas three states away and finding that everyone else at the pump was going to the same place. There was some of that on the New Jersey Turnpike on Friday night, where almost everyone in the Walt Whitman service plaza was female (a cashier said it had been like that all day). On the Mall, the Smithsonian's men's room was commandeered, but there were enough men present for a call and response: "Our bodies, our choice"/"Your bodies, your choice." Many said it was the best they've felt since Election Day....

The day produced physical evidence of a grassroots opposition with every bit as much potential as the Tea Party, the diffuse, small-government uprising that started small, but soon bedeviled both Obama and the GOP establishment, and ultimately cleared the way for Trump.

Keep in mind, the Women’s March on Washington occurred on January 21, 2017. Yet, Time is already hopeful for a new liberal “resistance” and “movement.” The magazine did give a front page cover to the Tea Party, but not until September 27, 2010, more than a year after the Tea Party gained ground. That issue featured an elephant in a tea cup with the headline, “It’s Tea Party Time.”