New Day co-anchor Chris Cuomo on Thursday continued the media freak out over Donald Trump picking a climate change doubter to run the Environmental Protection Agency. He even outrageously compared those with similar beliefs to past opposition of interracial marriage.

Camerota ignored Cuomo’s connection of climate science to equal rights for African Americans and instead pointed out: “People thought the Antarctic ice would be gone by now. It increased in 2014. This is what people hang their hat on when they say that the forecasts are not settled.”

The two hosts went back and forth on Pruitt:

CHRIS CUOMO: Either you accept the science or you don't.

ALISYN CAMEROTA: No. That's not what he's saying. He sees nuance where you see black and white, that it's either settled or not settled.

CUOMO: Ninety nine percent of the scientific community says that global warming is impacted by man.

Cuomo has a history of lecturing conservatives on this issue. On February 4, 2015, he lectured Ben Carson: “It seems as though the Republican Party has a problem with science – that they're always pushing back against science.” 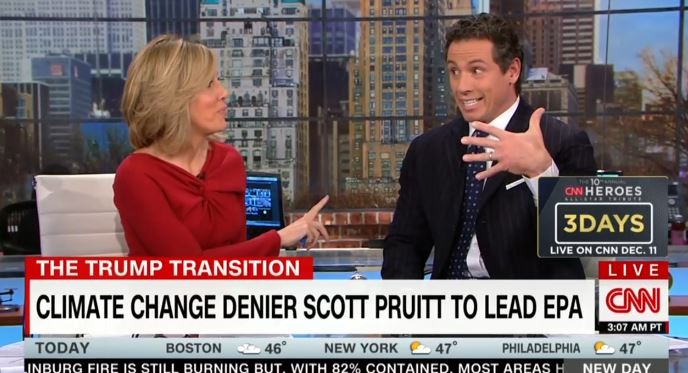 ALISYN CAMEROTA: Let's discuss it now with CNN politics executive editor Mark Preston and national political reporter for Bloomberg Politics Jennifer Jacobs. Great to see both of you guys. So, Scott Pruitt does not like the EPA. He has sued them many times. How is this going to work?

JENNIFER JACOBS: He has got several active lawsuits right now. So, yeah, he is a critic of the EPA. But, listen, he's the kind of kind of guy who faced a lot of controversy and he could have been blocked in the Senate in the past. But it looks like he’s going to sail right through. I mean, all they need 50 votes plus the Vice President, I'm not seeing any defectors, you know, who are peeling away from approving him. So far, there’s a lot of criticism, a lot of controversy. But it seems like, you know, despite all that, it's going to be just fine. Trump is going to get his way.

CHRIS CUOMO: Is it too early to know if anybody will peel off? The idea that he doesn't accept the science on what is causing global warming? Could be something. There are plenty of GOP senators who believe in global warming and it's human impact.

MARK PRESTON: That’s a good point. Because we're looking at it from the Democratic side criticizing him, but you also have Democrats like Joe Manchin, you know, from West Virginia who say, “Listen, he's been fighting for an industry that has been critical to my home state.” So, you know, that is interesting. You could see some centrist Republicans go the other way. Jennifer is absolutely right. In the end, Republicans who have the votes to get them through. What Democrats will do is try to damage him and beat him up as much as possible and perhaps try to get him to him to withdraw and from what he’s said in the past and done in the past, it’s very unlikely he would do so.

CUOMO: He says it's far from settled.

CAMEROTA: He says the science is far from —

CUOMO: That means he's not accepting the science.

CUOMO: Either you accept the science or you don’t.

CAMEROTA: No. That's not what he's saying. He sees nuance where you see black and white, that i's either settled or not settled.

CUOMO: Ninety nine percent of the scientific community says that global warming is impacted by man.

CAMEROTA: People thought the Antarctic ice would be gone by now. It increased in 2014. This is what people hang their hat on when they say that the forecasts are not settled. They fluctuate.