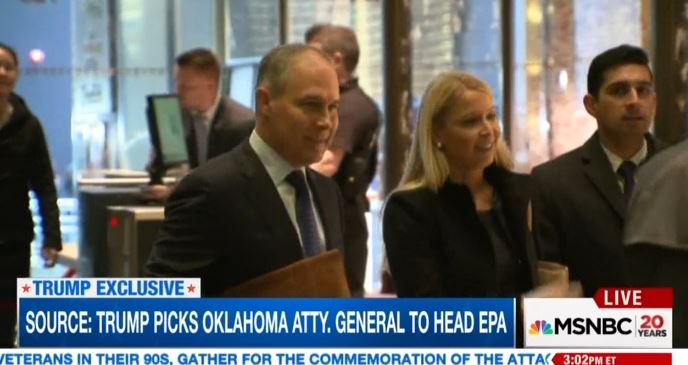 Pruitt is suing the EPA over climate change regulations. Hinting at problems, the journalist chided:

Industries that Mr. Pruitt regulates have also joined him as plaintiffs in court challenges, a departure from the usual role of the state attorney general, who traditionally sues companies to force compliance with state law.

The close ties have paid off for Mr. Pruitt politically: Harold G. Hamm, the chief executive of Continental Energy, a North Dakota oil and gas firm that also works in Oklahoma, was a co-chairman of Mr. Pruitt’s 2013 re-election campaign.

Environmental groups reacted with alarm Wednesday at the nomination.

“Scott Pruitt has a record of attacking the environmental protections that EPA is charged with enforcing. He has built his political career by trying to undermine EPA’s mission of environmental protection,” said Fred Krupp, the president of the Environmental Defense Fund. “Our country needs – and deserves – an EPA Administrator who is guided by science, who respects America’s environmental laws, and who values protecting the health and safety of all Americans ahead of the lobbying agenda of special interests.”

Rhea Suh, president of the Natural Resources Defense Council, said that “over the past five years, Pruitt has used his position as Oklahoma’s top prosecutor to sue the EPA in a series of attempts to deny Americans the benefits of reducing mercury, arsenic, and other toxins from the air we breathe; cutting smog that can cause asthma attacks; and protecting our wetlands and streams.”