CBS: ‘Climate Change Denier’ Trump May Now Be ‘Thinking About the Issue’

CBS This Morning’s Gayle King on Tuesday labeled Donald Trump a “climate change denier,” using the loaded term in a story on Al Gore visiting with the President-elect. All three networks promoted the global warming activist’s meeting, but it was co-host King who lectured, “President-elect Trump is on the record as a climate change denier. But a meeting with former Vice President Al Gore suggests that he's thinking about the issue.”

She added, “During the campaign, Gore said Trump's position could lead to a climate catastrophe.” Use of the term “denier” is controversial and something that some outlets don’t do. The Associate Press uses "doubters" instead.

“...Those who reject climate science say the phrase denier has the pejorative ring of Holocaust denier so The Associated Press prefers climate change doubter or someone who rejects mainstream science.” 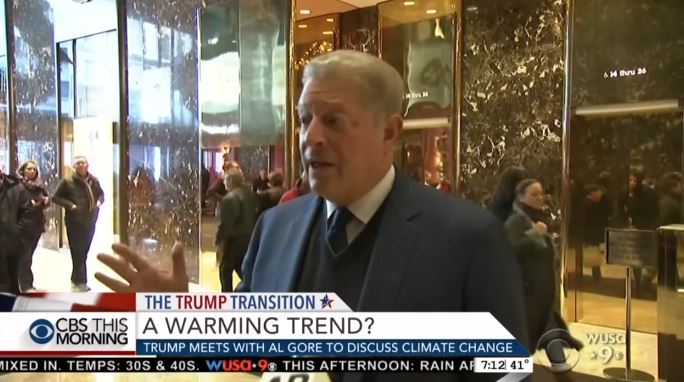 Reporter Major Garrett said of the meeting between Gore and Trump: “There was no green house gas conversion, but the conversation apparently will continue.”

Over on ABC’s Good Morning America, Tom Llamas used a less loaded term, explaining, “Trump himself has been skeptical of climate change, but Al Gore says the meeting was, quote, ‘productive.’”

On NBC’s Today, Peter Alexander noted that liberal global warming activist Leonardo DiCaprio is getting involved in the lobbying of Trump:

ALEXANDER: Ivanka, whose father formerly dismissed climate change as a hoax, recently discussed the issue with Leonardo Dicaprio. The Oscar-winner actor giving her a copy of his new documentary Before the Flood.

LEONARDO DICAPRIO: This is the most important issue of our time. 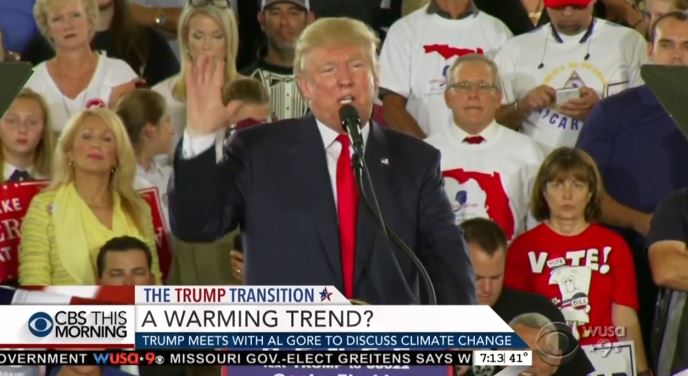 GAYLE KING: President-elect Trump is on the record as a climate change denier. But a meeting with former Vice President Al Gore suggests that he's thinking about the issue. During the campaign, Gore said Trump's position could lead to a climate catastrophe. Major Garrett is covering the transition and the Trump/Gore meeting. Major, Good morning.

MAJOR GARRETT: Good morning, President-elect Donald Trump has made it pretty clear that he would meet with friend or foe, providing it is on his turf or, in some cases, if daughter Ivanka is driving the agenda. Well, that's how Al Gore, harsh critic of Mr. Trump’s climate chang eskepticism, arrived yesterday. There was no green house gas conversion, but the conversation, apparently, will continue.

AL GORE: I found it an extremely interesting conversation and to be continued.

GORE: It's no secret that Ivanka Trump is very committed to having a climate policy makes sense for our country, for our world.

JOE MANCHIN: He’s as determined as I am to make this place work and I told him I’d be happy to be part of that.