CBS This Morning co-host Gayle King on Tuesday wondered aloud as to “what’s wrong” with Hillary Clinton treating her recent health scare as “no big deal.” Talking to Mark Leibovich of the New York Times, King justified Clinton’s initial attempt to hide her pneumonia from the public: “How much are voters supposed to know about a candidate's health issues? If she thought that she could power through and it was no big deal, what's wrong with her thinking ‘I'll get through this?’

She continued to spin, wondering, “Are we supposed to know everything that's going on in a candidate's life when it comes to health?” King co-hosts the morning show on CBS despite the fact that she is a Democratic donor and recently gushed over attending Barack Obama’s 55th birthday party.

It needs to be pointed out that in a September 5 World News interview, Tim Kaine and Clinton both went after Donald Trump for not releasing his health information:

TIM KAINE: Hillary Clinton has been willing to share with the American public all the information about her health in a way that Donald Trump won't.

HILLARY CLINTON: We now have the doctor who signed his letter, basically saying he did it in five minutes because the, quote, “limousine was waiting.” It is devoid of information. 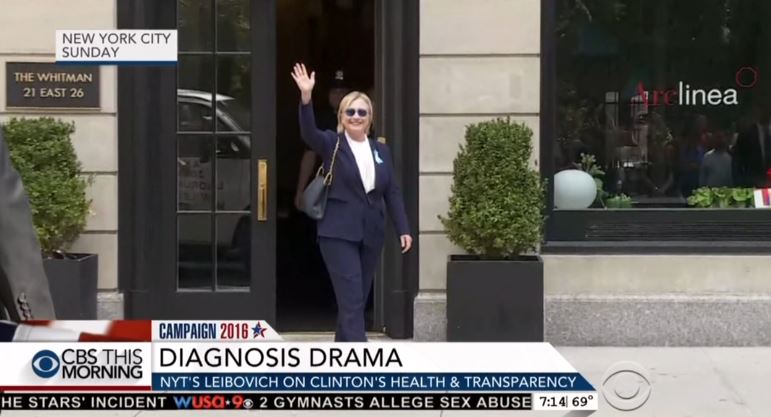 Perhaps King could have pointed that apparent contradiction out. Leibovich on Tuesday hit Clinton on transparency, but also dismissed the issue of health itself: “I think it's more an issue of transparency. I think this is a health issue that many people could identify with. I think powering through would be seen as admirable.”

This appeared too much for the other co-hosts. Both Gayle King and Josh Elliott pointed out that even Democratic strategists like Robert Gibbs and David Axelrod see this as a problem for Clinton. 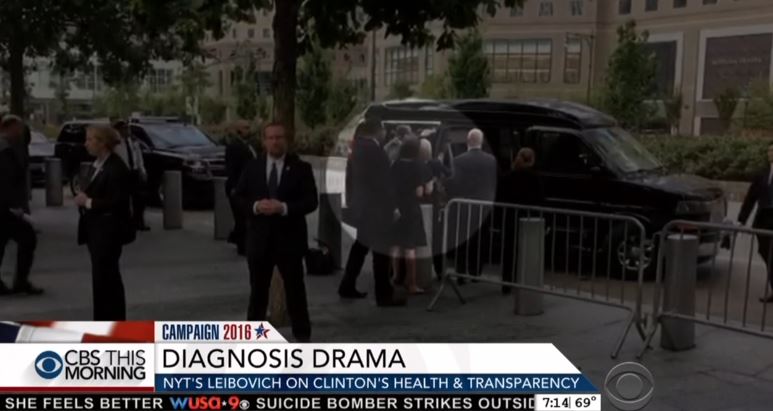 NORAH O’DONNELL: Mark Leibovich is chief national correspondent for the New York Times  magazine and a CBS news political contributor. He is with us at the table. Mark, good morning.

O’DONNELL: You heard Hillary Clinton say that she thought she is was not going to be a big deal that she could power through it. Is that the issue or is it an issue of transparency?

MARK LEIBOVICH: I think it's more an issue of transparency. I think this is a health issue that many people could identify with. I think powering through would be seen as admirable. Unfortunately, as happened so many times, especially in this campaign, more has been made of it because the Clintons have done this drip, drip, drip, fight for control of information. And ultimately, it looks like they're hiding something, which is never a good look.

GAYLE KING: Mark, how much are voters supposed to know about a candidate's health issues? If she thought that she could power through and it was no big deal, what's wrong with her thinking ‘I'll get through this?’ Are we supposed to know everything that’s going on in a candidate’s life when it comes to health?

LEIBOVICH: Well look, there's not a rule book sitting here which we can refer to.

KING: What do the rules say, Mark?

LEIBOVICH: You know, I wish we could refer to one. It would be a lot easier. We’d have a lot less to talk about. But this is a tension that the Clinton especially have been in the middle of for many, many years, Hillary Clinton used the phrase zone of privacy that everyone is entitled to in public life. This goes back 20 years. It’s a negotiation that’s been constant, tenuous and has only got more complicated.

O’DONNELL: But don’t you think it’s noteworthy that President Obama’s White House press secretary said yesterday, quote, “There's a reason we have had a long tradition in this country of individual candidates disclosing information about their health. We are electing someone to the most powerful job in the world, and there shouldn't be a double standard. Not only Hillary Clinton but Donald Trump should both be open and transparent about their health.”

KING: David Axelrod, back to your point about an Obama adviser, said it’s a matter of stealth not health. That that’s the issue.

LEIBOVICH: Yeah. This shouldn’t be that complicated. I mean, it’s not even a double standard. There should just be a standard and most candidates agree.

JOSH ELLIOTT: But there is a standard because Robert Gibbs, another Democrat as they all seem to be breaking ranks, said, “Look, there comes a time when a protective media pool needs to be part of a candidate’s daily life. There is a standard. And it's letting the media be with you essentially 24/7 at this point.

KING:  Donald Trump hasn't said anything. Do you find that surprising where he's attacked her on the road about stamina. He’s now saying to people, “Look, lay off.”

LEIBOVICH: Yeah. It’s as though the second this thing happened, someone went into his office and stole his phone which, you know, seemed to work. I mean, he's been pretty retrained. James Corden said in the clip, what's wrong with Donald Trump? Maybe than the issue.