After aggressively ignoring alternatives to Hillary Clinton and Donald Trump for months, CBS on Wednesday not only featured Libertarian nominees Gary Johnson and Bill Weld, the show’s hosts quizzed them about the problem of big government. In a segment that last almost six minutes, CBS This Morning co-host Charlie Rose offered a question not seen much on network television: “Ronald Reagan said government is not the solution, government is the problem. Is government the problem?”

Libertarian vice presidential nominee Weld replied, “I think that government is best which governs least. I think that is our credo and the man who said that originally was Thomas Jefferson.”

Co-host Gayle King respectfully encouraged Johnson to talk about the problem of high taxes: “You said you want on abolish the IRS which got a lot of people' attention. Rightfully so. You said you want to replace it with a federal consumption tax. How does that work?” 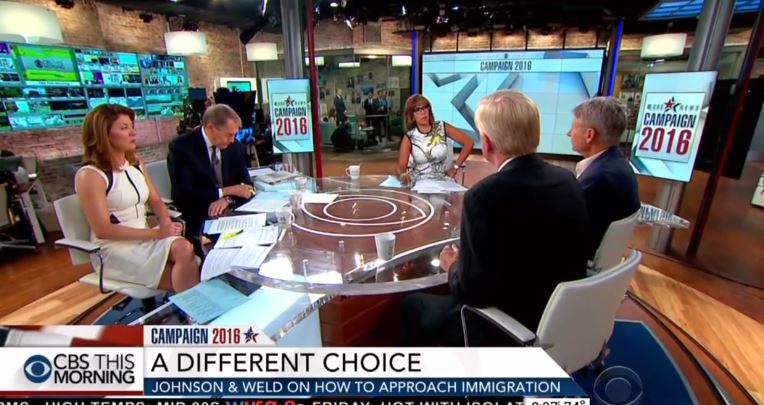 Now, the co-hosts predictably made the first question about how unrealistic a third party candidacy seems. Rose needled, “Do you realistically expect that you can win the presidency or in the end the role you play as a spoiler for one candidate or the other?”

Additionally, Norah O’Donnell prompted the two on their immigration policy, one that is calling for even more immigration and that denounces Donald Trump’s plan.  Regrettably, the CBS co-hosts ignored Johnson’s hostility to religious liberty.

Despite these caveats, however, the fact that Johnson and Weld were on CBS at all is a refreshing change. A study by the Media Research Center on Tuesday found that, from January 1 to August 31, third party candidates were virtually shut out. Gary Johnson had been discussed for a scant 11 seconds on the evening newscasts.

Americans can only consider alternatives to Trump and Clinton if they know such candidates exist. Kudos to CBS for at least starting the process.

A transcript of the interview is below: 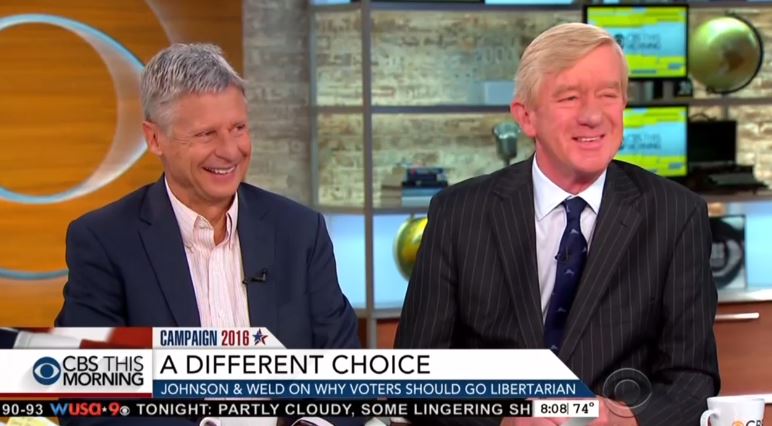 NORAH O’DONNELL: With a majority of voters having an unfavorable view of Hillary Clinton and Donald Trump, some are looking for a different choice. The Libertarian Party hopes to provide that alternative. Its platform calls for an end to government debt and no restrictions on personal relationships. The party also wants to repeal income taxes and abolish the IRS, introduce a free market health care system. Former Governors Gary Johnson and Bill Weld are running as the Libertarian Party’s president and vice presidential candidates They join us now at the table. Welcome.

BILL WELD: Thank you so much.

NORAH O’DONNELL: Great to have you guys here. Governor Johnson, let me start with you. You said it would be game over if you don’t get into the presidential debates. You haven't yet reached the 15 percent polling threshold in order to do that. What are you doing to change that with the debate less than 20 days away?

GARY JOHNSON: Well, it isn't game over if we are not in the first debate but if we are not in the debates, it is game over. I mean, there is no way you can win the presidential race without being in the debates. But right now, everyone or 99 percent of the press is just reporting the top line on these polls and if you dig down about half of these polls are including our name in this. And, right now, yesterday, Washington Post, we're in 15 states, we are over 15 percent. In six states, we are over 19 percent. In 40 states, over 10 percent. So we continue to ratchet up. Will it be enough to reach that first debate? We will have to see.

ROSE: Charlie, if we are in the presidential debates, 100 percent of people will know who we are and we think we have the chance to run the table.

WELD: And the reason —

WELD: The reason we have that we think we have winning arguments. We are fiscally responsible. We are socially inclusive. That doesn't describe either of the other parties. No one would accuse the Democrats of being fiscally responsible when it comes to the budget if they get in. The Republicans, you know, they made their platform even meaner than it was before their convention to be exclusionary toward certain groups. We think we have a six-lane highway up the middle and that represents the thinking of about 60 percent of the voters.

ROSE: By definition, Governor Weld, have you left the Republican Party?

WELD: Yes, I have and I told the Libertarians I would never return. It doesn't mean I'm not friendly, but it means I get to ask out loud why would any Republican vote for Donald Trump? He is anti-free trade. He’s pro-entitlements. He’s terrible on the budget. He’s unreliable.

O’DONNELL: One of the things I hope we can drill done on the issues. Let’s first start with immigration. Governor, you said not only would you not build a wall, you would allow more immigration in this country. You would make it easier to come to this country.

JOHNSON: Right, to get a work visa. A work visa should entail a background check and a Social Security card so that taxes get paid. There’s a reason 11 million undocumented workers in this country. It is impossible to get across the border legally.

O’DONNELL: So, allow more people into the United States?

WELD: Yeah. It's a labor force issue. As no one knows better than Gary Johnson as a southwest border governor. But Mr. Trump has planted this canard in the consciousness that all 11 million undocumented workers are, you know, chomping at the bit to become citizens. That’s just not true.

ROSE: But when you say you’d invite people to come in, you’re talking about legal entry into the United States.

ROSE: But the big debate, it seems to be, is what happened to the people who are here now, who are undocumented are here un— illegally.

O’DONNELL: Your point, governor, is don't grant them citizenship.

O’DONNELL: Put them in the system, grant them work visas.

WELD: If they are working get them a work visa, subject them to a background check and get them a Social Security card so they can pay tax and get them in the system and out of the shadows.

ROSE: You know what the argument is against a consumption tax? It is not fair.

JOHNSON: Well, it's —  it's regressive and the way that the fair tax deals with it being regressive, is that it issues everyone in the country a prebate check of $200 a month which allows everyone to pay the consumption tax up to the point of the poverty level.

WELD: I think that government is best which governs least. I think that is our credo and the man who said that originally was Thomas Jefferson. We are just a pair of Jeffersonian liberals, if you pardon the word.

ROSE: Oh, I thought you were a Hamiltonian, sir.

KING: I'm curious. Are you still enjoying this process?

WELD: This is my briar patch. I'm so grateful for Gary for getting me into this.

ROSE: There is an honest man right there. Love it.

JOHNSON: That is the pitch we are trying to make here also is, you know, we are not hypocrites. We don't say one thing and do another.

ROSE: Great to see you.