Finally a Backlash? CBS Derides Clinton as ‘No Questions’ Hillary

Though many journalists and networks are still not complaining about Hillary Clinton’s media blackout, the silent treatment seems to be irritating the reporters at CBS. A network graphic on Wednesday pointedly complained, “No Questions, Please: Clinton Criticized for Having Few News Conferences.” This comes after MSNBC raised the issue.

It has now been 270 days since the Democrat last held a press conference. Reporter Nancy Cordes chided, “Clinton did phone into two cable news shows last weeks, promising, as she has for months, she will do a press conference at some point.”

Cordes even included video of herself shouting questions at Clinton. Contrasting the candidate to Trump, she lamented, “His combative approach is a far cry from Clinton's.... She is generally too busy ignoring reporters to insult them.” 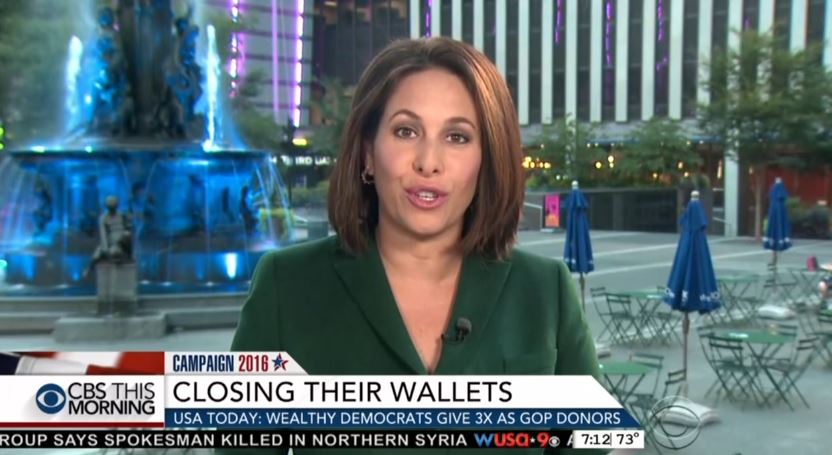 Stating the obvious, Cordes noted that the e-mail server scandal “could help her aversion to the format” of press conferences. The journalist even contrasted Clinton to Trump, noting, “Trump has held at least 14 news conference this year.”

STEVE KORNACKI: There is a tradition there of candidates coming forward; taking questions from anyone in the press who wants to ask them; being hit with whatever question happens to come to them; and having to deal with it on the spot. That is the tradition of the press conference. It's one that Hillary Clinton has not had much enthusiasm for, though.

On August 18, CBS alone examined the then-total: 258 days without having a press conference. As the number of days continues to grow, will other journalists and outlets object to Clinton walling herself off from the press? 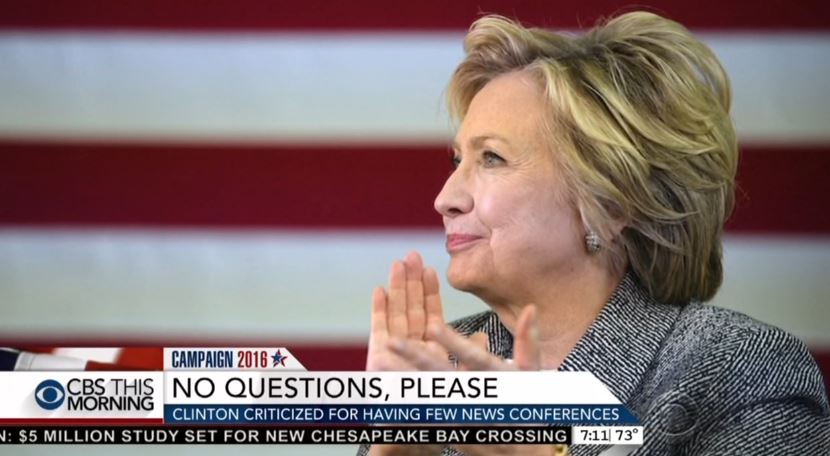 DEMARCO MORGAN: Sources tell CBS News the FBI will soon release notes from his investigation from Clinton's e-mail server. Clinton finished a coast to coast fund-raising tour last night. The State Department says her latest e-mails handed over by the FBI include approximately 30 documents that may be related to the Benghazi Libya attack that killed four Americans. Nancy Cordes is in Cincinnati where Clinton will speak to the American Legion convention in a few hours. Nancy, good morning.

NANCY CORDES: Good morning. Clinton returns to the campaign trail today after spending most of the past two weeks raising money. Her campaign says it was always the plan to use the end of the summer to refill the coffers, but it did come at a price. Clinton's 22 fund-raisers in the wealthy enclaves of Martha’s Vineyard, Nantucket, Cape Cod, the Hamptons, plus California, netted at least $31 million for her and for the party, but they also fueled a new Trump talking point.

DONALD TRUMP: She doesn't do rallies of any consequence. No press conference in, what, 255 days.

HILLARY CLINTON: He attacked a judge.

CORDES: Clinton did phone into two cable news shows last weeks, promising, as she has for months she will do a press conference at some point.

CLINTON: Stay tuned. There will a lot of different opportunities for me to talk to the press.

TRUMP:  The press should be ashamed of themselves.

CORDES: Trump has held at least 14 news conference this year.

CORDES: His combative approach is a far cry from Clinton's. [Trying to shout a question to Clinton.] Secretary Clinton on foreign policy --- [Back to segment.] She is generally too busy ignoring reporters to insult them. [Trying another question.] Any report on your husband leaving — Clinton took eight questions at a journalism forum earlier this month.

CLINTON: I may have short-circuited.

CORDES: But two on her two least favorable subject, which could help her aversion to the format.

CLINTON: I have acknowledged, repeatedly, that using two e-mail accounts was a mistake.

TRUMP: Mexico will be paying for the wall.

CORDES: As the election nears, Trump has grown less accessible too. Nearly all of his recent TV interviews have been with Fox News. And Democrats note he still has not released his tax returns or explained discrepancies in the glowing letter released by his doctor.

TIM KAINE: He said, “The healthiest individual ever elected to the presidency.” So that physical problem that caused him to not serve in the military is cleared up, apparently.

CORDES: Trump's troubles have had an impact, it appears, on giving by wealthy donors. A new USA Today analysis shows that wealthy Americans gave more than — nearly three times as much money to democratic super PACs. And most of that money, Josh, on the Republican side, went to down ballot races, House and Senate candidates who are struggling as Trump’s poll numbers stay low.