Warning, sensitive MSNBC viewers may want to look away. That’s essentially what Rachel Maddow told liberal watchers on Wednesday night before showing a picture of anti-Hillary Clinton buttons at the Republican convention. Considering the hateful rhetoric that’s come out of MSNBC for years, perhaps that viewer warning should have appeared in the past.

The buttons included ones that read “Hillary for prison” and “Vote no to Monica’s ex-boyfriend’s wife in 2016.” Maddow informed viewers, “You may find it uncomfortable. And so, you may not want to look at this stuff. But these are some of the pins that are being sold at the venue.”

Maddow continued, “But from calling Hillary Clinton a bitch, to the KFC special referring to her breasts and thighs and left-wing and all of those other things. That's part of the merchandise of the RNC.”

Certainly, using bad language towards people in public life or making vulgar comments is inappropriate. But that’s never stopped the journalists on MSNBC. Former network anchor Martin Bashir in 2013 wished that someone would defecate and urinate on Sarah Palin.

In 2008, then-anchor Keith Olbermann accused George W. Bush of “murderous deceit” and told the Republican to “shut the hell up.”  In 2016, Chris Matthews slimed that Ted Cruz “operates below the level of human life.” 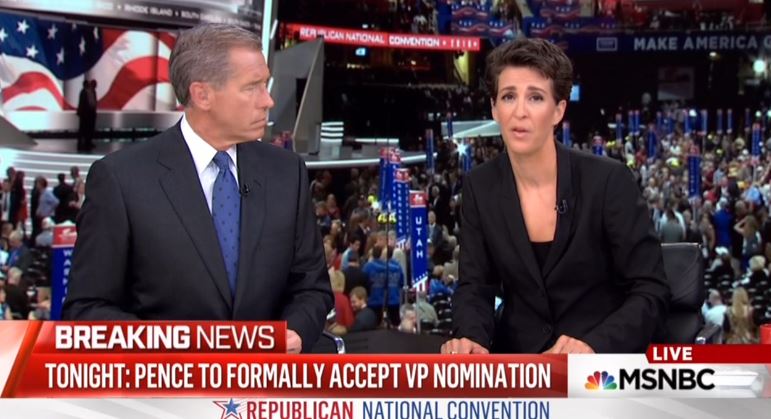 RACHEL MADDOW: Clinton has been more the subject of this convention than Donald Trump has, thus far. I want to show you a little something that we shot earlier today. I will tell you that, some of our viewers, you’re not going to find this offensive. You may find it uncomfortable. And so, you may not want to look at this stuff. But these are some of the pins that are being sold at the venue, at the RNC venue in Cleveland. And you know, you always, at conventions, you always get sharp-edged stuff, particularly the merchandisers tend to compete with each other to see what they can produce that will one up one another. But from calling Hillary Clinton a bitch, to the KFC special referring to her breasts and thighs and left-wing and all of those other things. That's part of the merchandise of the RNC. We've also seen pre-printed signs saying “Hillary Clinton for prison.” We’ve seen calls from the stage that she ought to be in stripes, that she ought to be locked up. That’s been a chant throughout the convention proceedings thus far. We expect to see more of this tonight. But here's a taste of what it has been like. That part of the convention the last couple days.

PAUL RYAN: They are offering a third Obama term brought to you by another Clinton.

MITCH MCDONNELL: Not since Baghdad Bob has there been a public figure with such a tortured relationship with the truth.

DONALD TRUMP JR.: She would be the first president who couldn't pass a basic back ground check. A Hillary Clinton Supreme Court means your right to own a firearm is gone.

JONI ERNST: She jeopardized our safety by deciding our laws don't apply to her.

RUDY GIULIANI: If did I what she did, I would be in jail.

DARRYLL GLENN: We all know she loves her pant suits. She deserves a bright Orange jump suit.

PAT SMITH: I blame Hillary Clinton personally for the death of my son. That’s personally.

CHRIS CHRISTIE: The charge of putting herself ahead of America, guilty or not guilty?

AL BALDASARO: (on the Jeff Kuhner Show): Hillary Clinton should be put in the firing line and shot for treason.

BEN CARSON: Has is their role model, somebody who acknowledges lucifer.

SMTH: She deserves to be in stripes.

MADDOW: That chant “lock her up, lock her up” has become a hallmark at this convention. I should mention the radio clip is part of the montage where you heard somebody say that Hillary should be put on the firing line and shot for treason, that is the state veterans chairman from New Hampshire of the Donald Trump campaign. He’s state representative from new Hampshire and he is a delegate to this convention. So he was somebody speaking in his capacity as a delegate and a Donald Trump campaign member, a Donald Trump supporter on talk radio. Because of his ties to the Trump campaign, because he has not repudiated the remarks since he said them, because the Secret Service has taken a little interest in him since he said that Hillary Clinton should be shot, that has loomed large today. But again, he is one of the more than 2,000 delegates on the floor today at the Republican convention.