NBC, CBS Yawn at Gun Shop That Refused to Sell to Orlando Terrorist

As the networks ramp up a liberal call for more gun control, only ABC’s Good Morning America on Thursday highlighted the news that a gun shop in Orlando turned away the Orlando terrorist when he attempted to buy body armor and bulk ammunition. Instead, CBS This Morning offered a lecturing, not-very-helpful segment about how easy it is to buy an AR-15 in Alexandria, Virginia.

In contrast, GMA’s Brian Ross explained the story of Lotus Gunworks: “The owner of the gun shop in Jensen Beach, Florida, told ABC News Mateen tried to buy body armor and bulk ammunition from his store but he turned him down because he seemed suspicious.”

Ross added, “The owner says he then notified authorities about his suspicions of Mateen. That was almost three weeks before the shooting.” ABC followed up in the 8am hour with a 13 second news brief.

In total, GMA only allowed 55 seconds on the story, but that’s still better than NBC’s Today and CBS This Morning, which skipped the development. Considering the gun control discussion now before Congress relates to whether more government regulations will stop a terrorist, the case of Lotus Gunworks is relevant. Even with the warnings from the FBI investigations and others, plus a fresh alert from a vigilant gun store, Mateen was still allowed to buy weapons. How will more bureaucracy help?

Instead, CBS This Morning journalists turned their attention to...Alexandria, Virginia.

KRIS VAN CLEAVE: In Virginia, the law to buy one is pretty straightforward. You have to pass an often very quick background check and then pay for your purchase. In Virginia, where the Virginia Tech shootings killed 32 people, there is no waiting period for a firearm. Even a so-called assault rifle, similar to those used in Orlando and San Bernardino. We sent a CBS News producer into a gun store in Alexandria just outside of Washington, D.C. 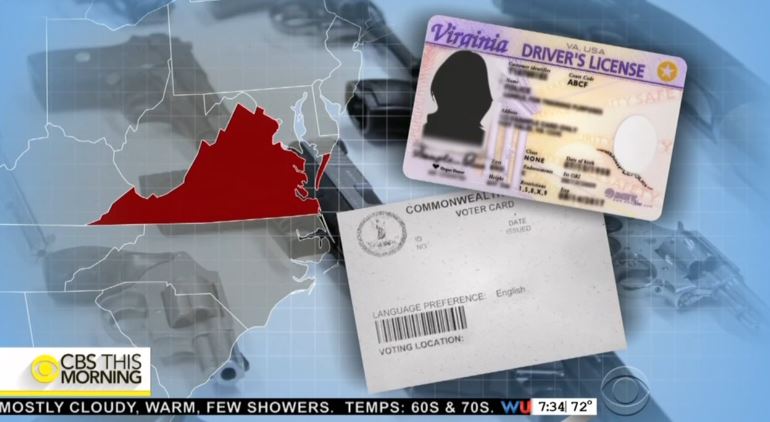 VAN CLEAVE: Per Virginia law, she provided two items to prove state residency, a driver's license and a voter ID card, as well as her passport to prove U.S. citizenship. She filled out these federal and state forms requiring her name, date of birth, Social Security number, and a few basic questions about any past criminal activity or current restraining orders and she passed a brief electronic background check.

WOMAN: Did this all go through?

STORE EMPLOYEE: It did. You've been approved.

VAN CLEAVE: All told, it took 38 minutes and $1,030 for her to walk out of the store legally armed with this rifle, 100 rounds of ammunition and a 30-round magazine.

NBC’s Today, despite a four hour run time, skipped the Orlando gun shop that refused to sell to the terrorist. 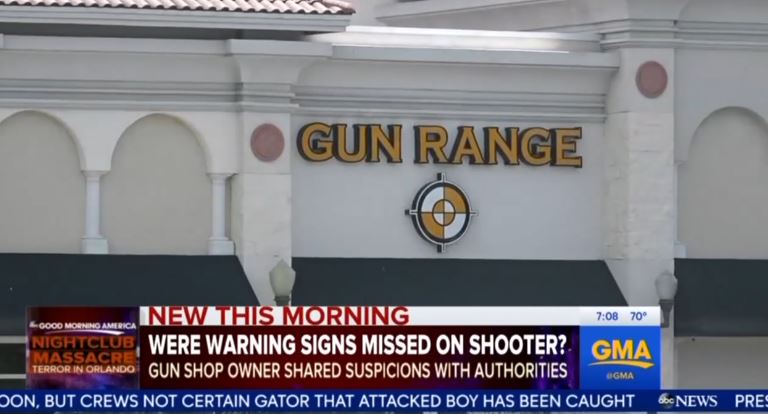 AMY ROBACH: We are learning new details about another possible missed warning sign. A gun shop owner who says he reported his suspicions about the gunman to the authorities weeks before the attack. ABC's chief investigative correspondent Brian Ross is here and, Brian, we always hear the phrase "if you see something, say something." A lot of people said something. 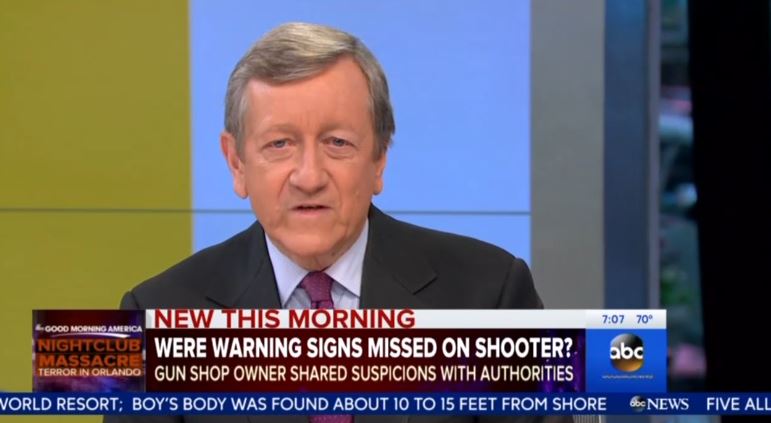 BRIAN ROSS: That seems to be the case. The owner of the gun shop in Jensen Beach, Florida, told ABC News Mateen tried to buy body armor and bulk ammunition from his store but he turned him down because he seemed suspicious. The owner says he then notified authorities about his suspicions of Mateen. That was almost three weeks before the shooting, Amy. No immediate comment so far from the FBI or local authorities.

ROBACH: Certainly we expect to hear one soon.