Would They Do This to Chelsea? CBS Grills Ivanka Trump on Dad’s Treatment of Women

O’Donnell pressed, “Is there unending commentary on the female form?” The journalist wouldn’t leave the subject, demanding, “But you have worked so closely with your dad. There's another woman who is quoted in the article that says that Donald Trump groped her at a... meeting.”

Speaking of Hillary Clinton, O’Donnell demanded, “Do you think bringing up her husband's past infidelities, this discussion, is worthy of a presidential campaign?” Regarding Mr. Trump, the reporter lectured, “He's running against a woman, and he has said that he's already using gender as a way to run against her.” 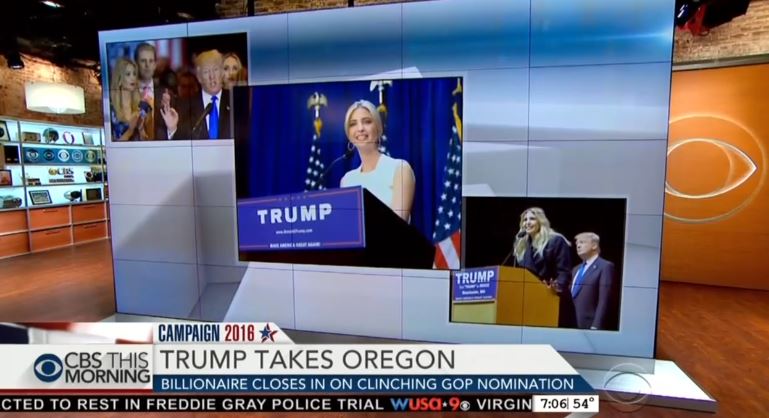 In contrast, when Chelsea Clinton appeared on the same show last October, the hosts gushed over her, describing Bill Clinton’s daughter as a “reality check” for her father and wondering “what advice are you giving [Hillary Clinton].”

On April 13, 2015, NBC fawned on the younger Clinton as the “X Factor” for her mom. Certainly, they did not grill her on Bill Clinton’s poor treatment of women. 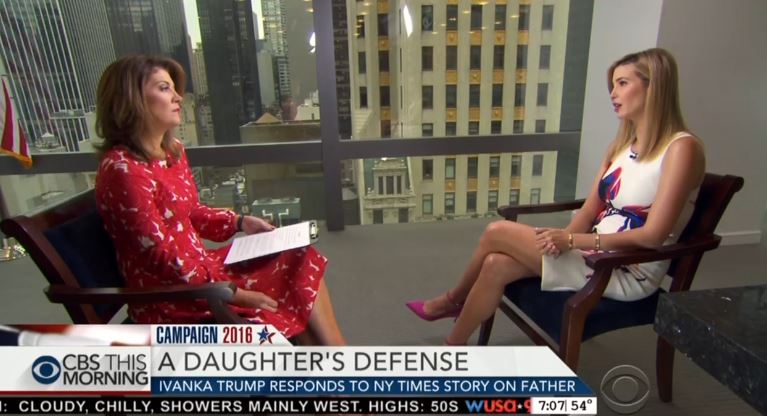 NORAH O’DONNELL: Ivanka Trump slams reports her father treats women poorly in the workplace. Our interview on her role in the campaign and the Trump organization.

NORAH O’DONNELL: Donald Trump picked up an estimated 17 more delegates last night in Oregon, taking him closer to 1,237. The number needed to clinch the Republican nomination. While his comments and alleged behavior toward women brought new scrutiny in recent days, one powerful woman is standing up for him – his daughter, Ivanka. We talked yesterday at New York’s Trump Tower, where she pushed back against the latest accusations.

I'm going to ask but The New York Times, they ran a front-page article this Sunday about your father and the treatment of women. Did you read it?

IVANKA TRUMP: I did, and I found it to be pretty disturbing based on the facts as I know them. And obviously I very much know them, both in the capacity as a daughter and in the capacity as an executive who's worked alongside of him at this company for over a decade. So I was bothered by it. But it's largely been discredited since. Most of the time when stories are inaccurate, they're not discredited and I will be frustrated by that. But in this case, I think they went so far, they had such a strong thesis, and created facts to reinforce it. And you know, I think that narrative has been playing out now, and there's backlash in that regard.

[ON-SCREEN HEADLINE: Trump & Women; Ivanka Trump on Clinton and Gender in the Campaign]

TRUMP: No, no. And again, this is an article that is widely being discredited. The lead person who was interviewed for the story and that the story opens up with was all over the news yesterday saying that they manipulated what she was saying. I don't find it that meaningful to comment on this particular story because I think the facts are starting to speak for themselves.

O’DONNELL: But you have worked so closely with your dad. There’s another woman who is quoted in the article that says that Donald Trump groped her at a – you know, at a meeting, at a business meeting.

TRUMP: Yeah. Well, I – look, I'm not in every interaction my father has, but he's not a groper. That's not who he is. And I've known my father obviously my whole life and he has total respect for women. He was promoting women in development in construction at a time when it was unheard of. There was no trend towards equality in the real estate and construction industry back in the 1980s, and he was doing it because he believes ultimately in merit.

O’DONNELL: He's running against a woman, and he has said that he's already using gender as a way to run against her.

TRUMP: Well, is he using gender, or is she using gender? I think she's using gender, as well. I'm not going to advocate for a female leader who I'm voting for solely on the basis of gender, and I think a lot of people feel that way.

O’DONNELL: You've supported Hillary Clinton in the past financially, voted for her.

O’DONNELL: Do you think bringing up her husband's past infidelities, this discussion, is worthy of a presidential campaign?

TRUMP: You would have to ask my father that. I mean, I’m not – my role isn't politics. My role is running our business.

O’DONNELL: But I do want to get your take on this because you're a very successful businesswoman and you’re a mother. And the discourse in this campaign and the tone in this campaign – I mean, your dad loves to tweet, and he has called women crazy, he’s called them crooked, that's what he calls Hillary Clinton. He's even used the word bimbo. I mean, do you ever look at those tweets and say, “Dad, you know, tone it down a bit”?

TRUMP: I've certainly thought that certain things should be toned down, but not necessarily in relation to that. When I think about myself as a feminist, it's important that women are treated equally. And he treats women and men equally.

O’DONNELL: The polls show he has a 69% unfavorable rating among women. How does he change that?

GAYLE KING: I think she represents her father very well. She clearly is his daughter and makes a point that she disagrees with what's said about him. And she raises a point, Norah, I think about how The New York Times article, a lot of women – a few women are coming forward saying they were misrepresented. The New York Times, on the other hand, is saying, “We stand by our story.”

O’DONNELL: Yeah, she says The New York Times created a thesis and then created facts to support that thesis. There will be more on this story.

CHARLIE ROSE: Yeah, I was interested in the way you pushed her on the notion of attacking Secretary Clinton because of her husband's activities.

O’DONNELL: Right. It will be the Democrat – the first woman nominee of a party, so gender is going to continue to be a topic. And we're going to have more with Ivanka Trump in our next hour, including what happens to the Trump empire if her father wins the White House. Plus, how she wants to disrupt the concept of working women.