In a surprising twist, ABC’s Good Morning America on Thursday hyped the “bombshell” documentary on Anthony Weiner and Hillary Clinton’s aide, Huma Abedin. Yet, the tone of the Jon Karl segment was worried. The reporter fretted, “This documentary with extraordinary behind-the-scenes footage dredging it all up again at the worst possible time for Hillary Clinton and her closest aide.”

Karl identified Abedin as “Clinton's closest aide and constant presence at her side” and reiterated, “A new documentary about [Weiner’s] sordid political tale couldn't come at a worse time.”

Highlighting the possible impact of Weiner, the journalist speculated, “Now with the documentary, another chance for Trump to bring up Hillary Clinton's own response to her husband's infamous sex scandal.”

The ABC graphic on-screen screamed, “Bombshell Anthony Weiner Documentary: Could it Cause Trouble for Hillary Clinton?” 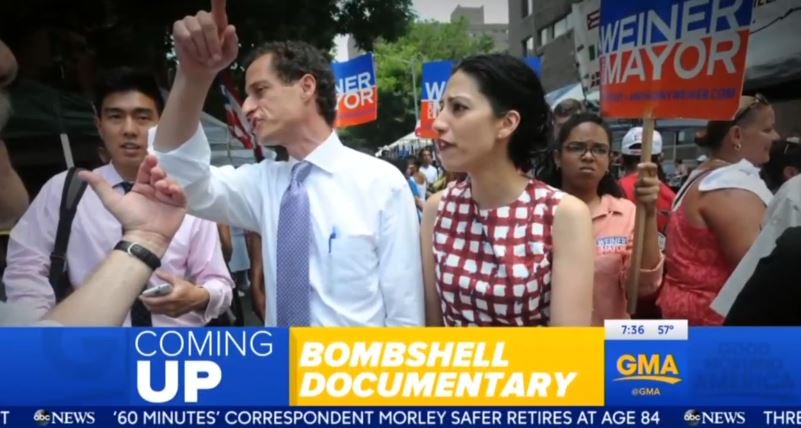 ABC’s Good Morning America has long been very friendly to Mrs. Clinton. Co-host George Stephanopoulos is a former aide to Bill Clinton who secretly donated $75,000 to the Clinton Foundation. Stephanopoulos routinely skips difficult questions to Clinton and avoids mentioning his conflict of interest.

However, the segment on the Weiner documentary also reflects GMA’s love of tabloid stories. On Thursday, that urge apparently surpassed the need to assist the Clintons. But Karl made sure to offer a sympathetic take, focusing first on how unfortunate the timing of Weiner could be. 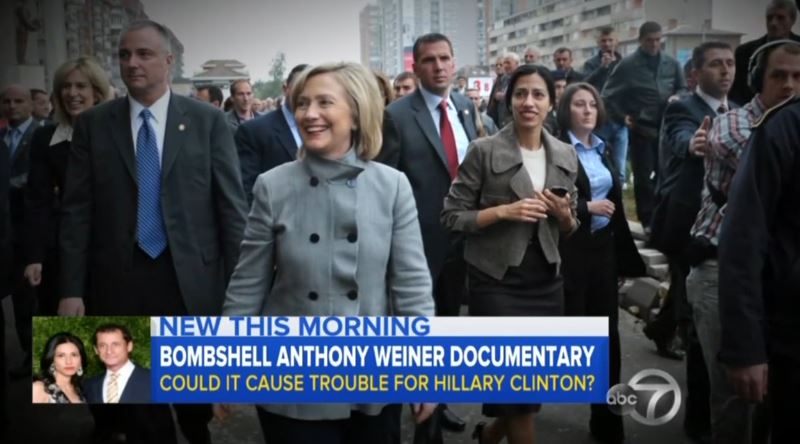 LARA SPENCER: Now to a new documentary about former Congressman Anthony Weiner and the sexting scandal that forced him out of office. He was married to one of Hillary Clinton's top aides and now there are new questions about whether it will cause problems with her campaign. ABC’s Jon Karl is in Washington with details. Good morning, Jon.

ABC GRAPHIC: Bombshell Anthony Weiner Documentary: Could it Cause Trouble for Hillary Clinton?

JON KARL: Good morning, Lara. The Anthony Weiner scandal was one of the strangest political episodes of our time. This documentary with extraordinary behind-the-scenes footage dredging it all up again at the worst possible time for Hillary Clinton and her closest aide. In politics, as in much as life, timing is everything.

REPORTER [to Anthony Weiner]: How many women were they? Can you remember?

WEINER: What I would like to talk about is housing in the Bronx. Any question about that?

KARL: For Congressman Anthony Weiner and his wife Huma Abedin, Hillary Clinton's closest aide and constant presence at her side, a new documentary about his sordid political tale couldn't come at a worse time.

WEINER: Today I'm announcing my resignation from Congress. [From documentary] The punch line is true about me. I did the dumb thing.

KARL: The sexting scandal that ended Weiner’s congressional career in 2011 featured heavily in the film directed by his former aide Josh Kriegman. Shot with extraordinary access, it documents Weiner's attempt at redemption, his run for New York City mayor in 2013. His wife, front and center through it all. Standing by Weiner as woman after woman came forward with stories of his explicit online messages.

WOMAN [in documentary]: Just a quick optics thing. You will look happy.

KARL: Weiner initially denied everything, even whether it was him in the lewd picture that started it all.

ANTHONY WEINER: Look, here's what —  I'm reluctant to say to you definitively anything about this.

KARL [From 2011]: I gotta say, it sounds strange. If somebody had a picture of me —  my underwear, I think I would know if it was a photograph of me.

WEINER: What if it was a picture of you that was manipulated, that was taken from your account or put into your account. But let me ask you, I'm telling you --

KARL: The documentary captures him as he lashes out at critics.

WEINER: It takes one to know one, jackass.

KARL: And owns his tanking reputation.

WEINER: This is the worst. Doing a documentary on my scandal.

KARL: Weiner recently told Larry King he knows he signed away the rights to the footage gathered by Kriegman but he doesn't approve of the way his wife is depicted.

WEINER: It is what it is. I haven't seen it. The only thing I'd say is that it is —  they're selling it based on little snippets of my wife who didn't cooperate, who is, like, in the background of scenes apparently, which I think is a little bit dishonest.

KARL: Weiner’s race for mayor ended when he was caught sexting yet again, bringing more ridicule, including from a certain real estate developer in New York.

KARL: And now with the documentary another chance for Trump to bring up Hillary Clinton's own response to her husband's infamous sex scandal.

UNIDENTIFIED WOMAN: Hillary Clinton has said she's not going to respond to the personal attacks about her but a test will be if he starts talking about her top aide. Will she have to respond or let those attacks on her sit out there with no response? I think that will be a question for the campaign.

KARL: We are told Anthony Weiner still has not seen the film and as you can imagine, Lara, neither Huma Abedin nor Hillary Clinton had any comment.

SPENCER: Yeah, not surprising. Thank you very much, Jon.