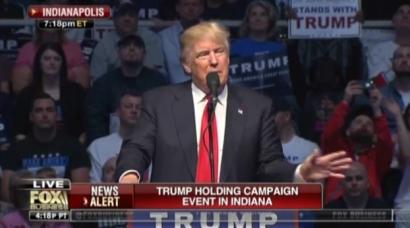 All three broadcast networks, thus far, have ignored a shocking moment on Wednesday night when Donald Trump touted his endorsement by convicted rapist Mike Tyson. Speaking in Indianapolis, Indiana, the location where Tyson was convicted of brutally assaulting a beauty pageant contestant, Trump bragged, “Mike Tyson endorsed me... Mike said, 'I love Trump. I endorse Trump.'... When I get endorsed by the tough ones, I like it, because you know what? We need toughness now.”

In 1992, Tyson was convicted of raping Sunday school teacher and honor student Desiree Washington. At the time, the New York Times explained, “The woman testified that Mr. Tyson had overpowered her in his hotel room, pinned her on a bed, stripped her, raped her and laughed while she cried in pain and begged him to stop.”

Trump has a history with Tyson. As reported by the Indy Star, “Trump had a financial interest in the case because Tyson's fights made money for his hotels.” On the February 21, 1992 NBC Nightly News, just a few days after the guilty verdict, Trump offered this cringe-worthy defense of the boxer:

Conservative radio host Greg Garrison of WIBC in Indianapolis was the successful lead prosecutor in the Tyson rape case. On Thursday’s show, an outraged Garrison assailed Trump for reveling in the Tyson endorsement: “So what does that mean about Mr. Trump? The leader of the free world needs to be rid of that kind of stuff and maybe considered in his information before he speaks or ingratiates himself to a thug like Mike Tyson.” [Listen to the audio here.]

Univision and Telemundo, the two major Spanish language networks, also skipped the Mike Tyson endorsements in their evening newscasts on Wednesday or Thursday. Given how much these networks have piled on Trump, this is odd.

A partial transcript of Garrison’s opening commentary from Thursday is below:

GREG GARRISON: Mr. Trump, tough is one thing, a serial rapist is quite something else. A 17-year-old girl, her clothes ripped off her, torn, all because in her naivete at 17, the fact that her brother and her father were huge Mike Tyson fans made her feel that she would be absolutely safe with him and boy was she wrong. I’ve been thinking about this all night. Kept me up. You know how I feel about this election stuff. I don’t want to throw rocks at anybody. I have my differences with Mr. Trump. I got a couple with Mr. Cruz. But this is where I want you to listen to me with both of your ears open.

...
I would ask Mr. Trump if I got to talk to him, you’ve raised daughters. I’m sure you didn’t have a daughter that didn’t do something improvident at some point or son for that matter.

Desiree Washington came to Indiana to compete in a Miss Black America contest. She was a very talented honor student. A Sunday school teacher. No, really. I’m not making that part up. No. So, she agrees to go out on the town with Mr. Tyson, who invited her to do so when he appeared at a rehearsal for the preparation of their big shows in the competition. He called her back. She said sure. What she got for her trouble was raped. Brutally, horribly raped. Tore her clothes. Tore her body. Destroyed her life. I see a news piece from back some time ago when Mr. Trump appears to have suggested it was her fault. I’ll tell you one thing Mr. Trump, had that been your daughter, those words would never have come out of your mouth. And you would never have thought about it.

He gets out of jail after doing three years of nothing but three squares and a rectangle in DOC here, it’s not six months until he rapes another woman.

So what does that mean about Mr. Trump? The leader of the free world needs to be rid of that kind of stuff and maybe considered in his information before he speaks or ingratiates himself to a thug like Mike Tyson.

If journalists are doing their job, they should investigate Trump's praise of Tyson, as well as his efforts to seemingly blame a rape victim.