ABC: Trump or Cruz? Neither Can Beat Hillary After This Primary

According to Good Morning America’s Matthew Dowd, it really doesn’t matter if Ted Cruz or Donald Trump win the Republican primary. Neither can beat Hillary Clinton. While discussing the National Enquirer’s sketchy claims about Cruz, the ABC political analyst allowed that Clinton is “vulnerable.” But he concluded of the GOP primary: “It actually almost puts the Republicans in a place where they can't win after all this is happening.”

Over on CBS This Morning, conservative Peggy Noon said of Trump’s retweeting attacks on Cruz’s wife: “He has devoted too much brain space to things that are unworthy, tatty, unattractive, and creepy.”

This prompted moral equivalence from co-host Gayle King. Speaking of the unproven, poorly-sourced National Enquirer allegations, she equivocated, “But they are both doing this, Peggy, on the show yesterday. They are both blaming the other.” (As of Monday, all three networks have devoted over 15 minutes to the tabloid story.) 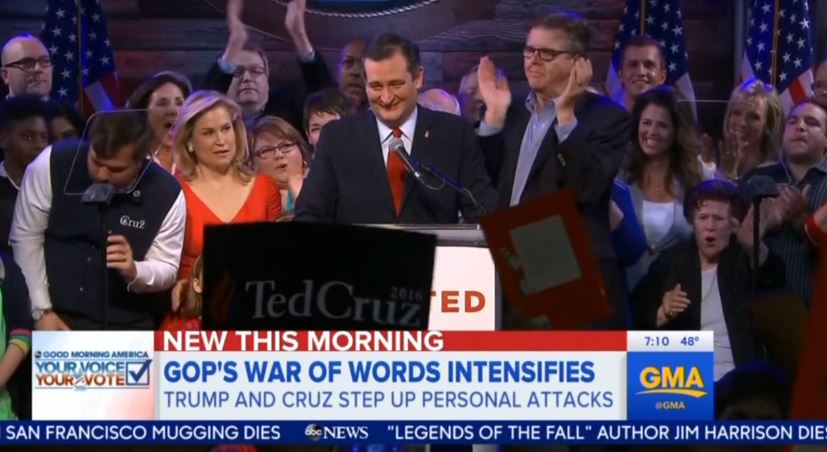 On Friday, New York Times writer Mark Leibovich appeared on CBS This Morning and echoed what was said on Monday’s Good Morning America. Speaking of the harsh attacks from the two Republicans, he declared, “Is this good for Donald Trump? Is this good for Ted Cruz?; First of all, I think Republicans lose either way.”

A transcript of the GMA segment, which aired at 7:12am ET, is below:

DAVID MUIR: I want to bring in ABC’s Matthew Dowd in Austin, Texas and Kristen Soltis Anderson in Washington this morning. Good morning to you both. And Matt, I want to start with you. You’ve got Donald Trump categorically denying he had anything to do with that tabloid report. You have got Ted Cruz saying attacking wives, children should be completely off-limits. Any question in your mind this is the new low point in this race? 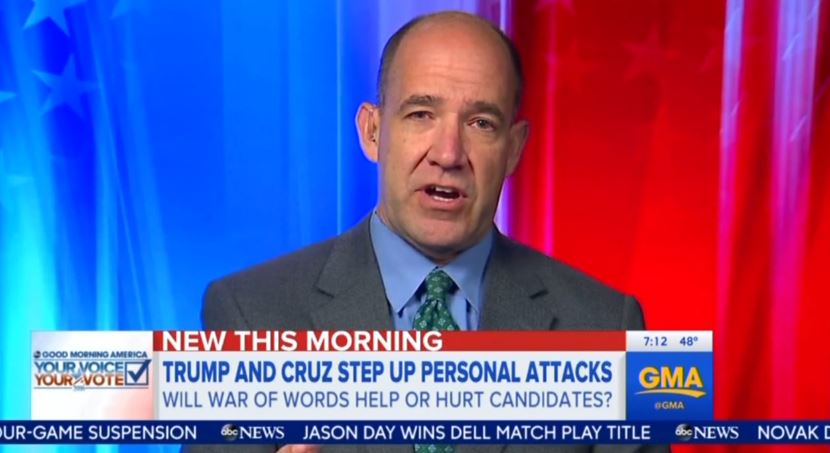 MATT DOWD: Well, David, every week seems to be a new low point in this race. This is like a made for TV movie meets high school locker room. And in the course, that’s what happens. Nobody benefits from this, in my view. The only person that possibly might benefit a little bit is John Kasich the governor of Ohio who's still running but way behind in the course of this. But the Republican brand in the course of this is severely damaged. And going up against Hillary Clinton, who is very vulnerable if she is the likely nominee in the course of this race, but still a lot to go, it actually almost puts the Republicans in a place where they can't win after all this is happening.

MUIR: And Kristen, just look at what we witnessed in the world over the last week, the attacks in Brussels, you had a key meeting with an editorial board with Donald Trump answering questions about foreign policy, some saying not answering. And yet, little talk about that.