The morning after the shock news that Supreme Court Judge Antonin Scalia died, ABC and NBC actually opened their Sunday shows with fitting tributes to the “legendary” “American original,” seeing the conservative as a “giant” who was “funny and sarcastic.” That didn’t stop Good Morning America and Today from constantly referring to Scalia as “controversial.”

GMA’s Terry Moran, no conservative, praised, “The Supreme Court had never seen anything like Antonin Scalia. He was the court's first Italian-American. But he was a high-voltage intellectual who developed this great theory about the Constitution.” Moran mourned, “He was a happy warrior. You know, I've been thinking, it's just impossible to imagine that great courtroom without him in it.”

The effusive praise continued when the journalist cheered, “Justice Antonin Scalia was an American original, a towering icon of conservative jurisprudence. A man who loved his life in the law.”

Of course, Moran also made sure to highlight: “But his quick tongue landed him in trouble at times. In 2015, Scalia's comments about affirmative action drew protests.” He added, “Love him or loathe him, and Americans did both, he was the kind of man to inspire those feelings.” 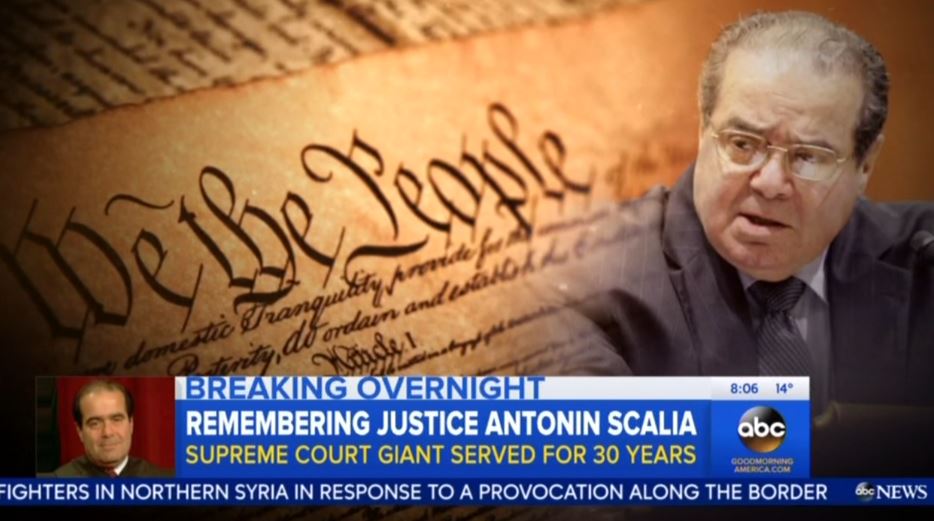 But the reporter flatly declared Scalia “one of the most important Supreme Court justices in American history.” ABC and Moran should be commended for leaving politics aside to pay tribute to the legendary justice.

Over on Today, co-host Craig Melvin proclaimed that “Justice Scalia was a giant on the bench.” Pete Williams marveled, “Given what a controversial figure Antonin Scalia became, nominated by Ronald Reagan, it still surprises some to know he was confirmed unanimously in 1986, 98-0.”

Williams described, “The nation's first Italian-American justice soon staked out a position as a steadfast conservative, against affirmative action in hiring and school admissions and an opponent of abortion rights.” 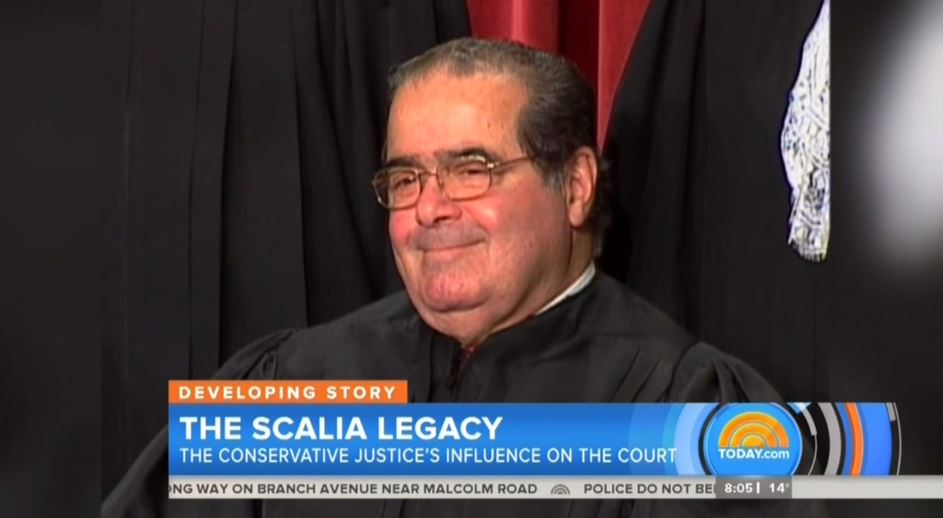 However, Williams also noticed times when Scalia, strictly devoted to the text of the Constitution, “delighted liberals”:

But he delighted liberals by pushing the court to expand the rights of defendants on trial to confront their accusers in court, another ruling he inspired said judges should not consider facts in sentencing that weren't found by a jury.

(CBS, unlike ABC and NBC, airs a pre-taped morning show on Sundays. Thus, there was not extensive Scalia coverage.) 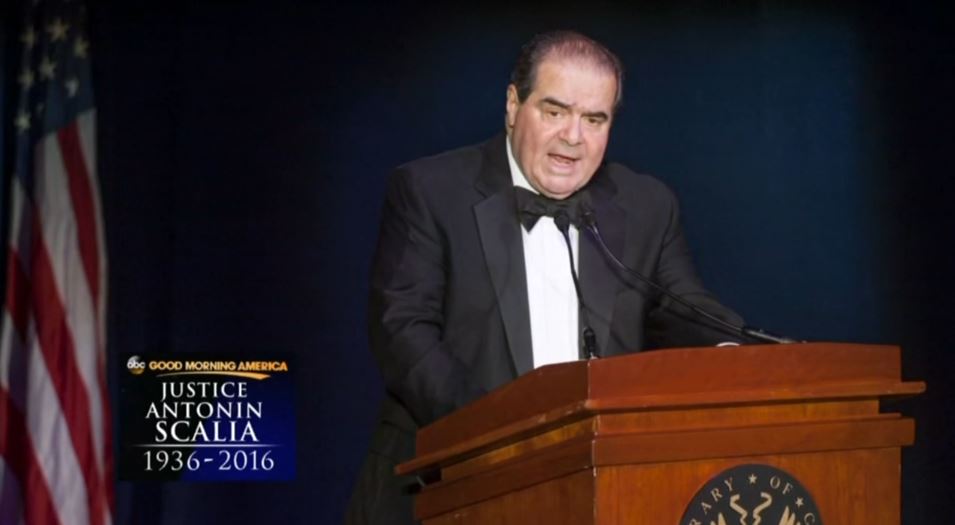 BARACK OBAMA: He influenced a generation of judges, lawyers, and students and profoundly shaped the legal landscape.

HARRIS: Flags across America lowered to half-staff in his honor. This morning, the focus on his legacy.

ANTONIN SCALIA: Getting nominated to the supreme court is a culmination of a dream, of course.

HARRIS: Scalia served three decades on the court. A fiery and pivotal figure, admired by colleagues, widely respected. With friends on both sides of the ideological divide.

GEORGE STEPHANOPOULOS: Justice Scalia's opinions are legendary. Sharp, elegant, funny, and sarcastic. He was a hero to conservatives. Inspired a generation of legal thought. ABC's Terry Moran has covered his tenure for so long and he joins us from Mexico City. Good morning, Terry.

TERRY MORAN: Good morning, George. You know, the Supreme Court had never seen anything like Antonin Scalia. He was the court's first Italian-American. But he was a high-voltage intellectual who developed this great theory about the Constitution and the law and the proper role of judges in our system and through the force of his intellect. His flair as a writer and his appetite for argument, he made those ideas count in the country and in the court. And he did it all laughing. He was a happy warrior. You know, I've been thinking, it's just impossible to imagine that great courtroom without him in it.

MORAN: Justice Antonin Scalia was an American original, a towering icon of conservative jurisprudence. A man who loved his life in the law.

SCALIA: I like figuring out the right answer to legal questions, believe it or not.

MORAN: Nino Scalia, as he was known to friends, served three decades on the United States Supreme Court. And in those years, he became a pivotal figure. He was a justice who did more than hand down rulings, Scalia wanted to change the law itself and the court through his spirited and forceful advocacy of what he called textualism. His strict interpretation of the Constitution. He was unafraid to take a stand and seemingly incapable of backing down, famously lashing out at critics of his finding in the 2000 Bush versus Gore election dispute.

SCALIA: I and my court owe no apology whatever for Bush versus Gore. We did the right thing so —  so there. Get over it, it's so old by now.

MORAN: It was that brashness which cemented the Court's first Italian American justice in the public's mind. A vivid writer, his opinions became famous for their caustic, take no prisoners style. He called the majority's reasoning in a 2013 Defense of Marriage Act case legalistic argle-bargle and slammed the Court's decision on the affordable care act as jiggery-pokery.

SCALIA: How can the federal government establish a state exchange? That is gobbledygook.

MORAN: In cases big and small, his wit lashed out in legal arguments. He loved to get a laugh.

SCALIA: Okay, you can't refuse your money or your life. But your life or your wife's? I could refuse that one.

MORAN: But his quick tongue landed him in trouble at times. In 2015, Scalia's comments about affirmative action drew protests.

SCALIA: You know, when you take more, the number of blacks really competent blacks admitted to lesser schools, turns out to be less.

MORAN: But his friends and his colleagues say behind the combative mind and fiery words was a warm man and a close friend, forging an unlikely bond with liberal justice Ruth Bader Ginsburg. The fellow New Yorkers candid about their friendship, despite fiercely opposing political views.

SCALIA: We agree on a whole lot of stuff. We do. Ruth is really bad only on the knee-jerk stuff. [ Laughter ] She is —

SCALIA: Maureen is an extraordinary woman and without whom I wouldn't be here.

MORAN: Scalia’s wife and the family, they built together, as much a part of his life and legacy as the Court and country he served. That seat on the Supreme Court, something he always cherished. Many times dodging questions about stepping down, saying there was only one thing that could make him walk away.

SCALIA: I will certainly retire at the time where I perceive that I am not as good as I used to be. That I've —  I've lost a step.

MORAN: For many, he never did. Love him or loathe him, and Americans did both, he was the kind of man to inspire those feelings, Scalia must be counted as one of the most important Supreme Court justices in American history.

STEPHANOPOULOS: And Terry, when you go back through his opinions, where is the most sweeping victory? And the most searing defeat?

MORAN: You know, probably his biggest victory was on the Second Amendment. He campaigned for years and eventually wrote the opinion that held that the Second Amendment is the individual right, that right to bear arms. That was in keeping with his notion that the federal government's power should be limited. Some things are left to states, localities, and citizens. His biggest defeat, without question, abortion. He desperately wanted to overturn Roe versus Wade. He was never able to.