In a segment attacking Donald Trump’s call to ban Muslims from the United States, CBS This Morning’s Major Garrett on Tuesday hyped the left-wing Southern Poverty Law Center (SPLC) as an objective source on who is hateful.

Garrett began by saying of the businessman: “Trump cited polling data from the Center for Security Policy that he said indicated dangerous levels of anti–American sentiment among Muslims in the United States." With no mention of SPLC’s ideology, Garrett lectured, “The Southern Poverty Law Center, which tracks hate groups nationwide, described the head of the center, Frank Gaffney, as, quote, 'one of America's most notorious Islamophobes." 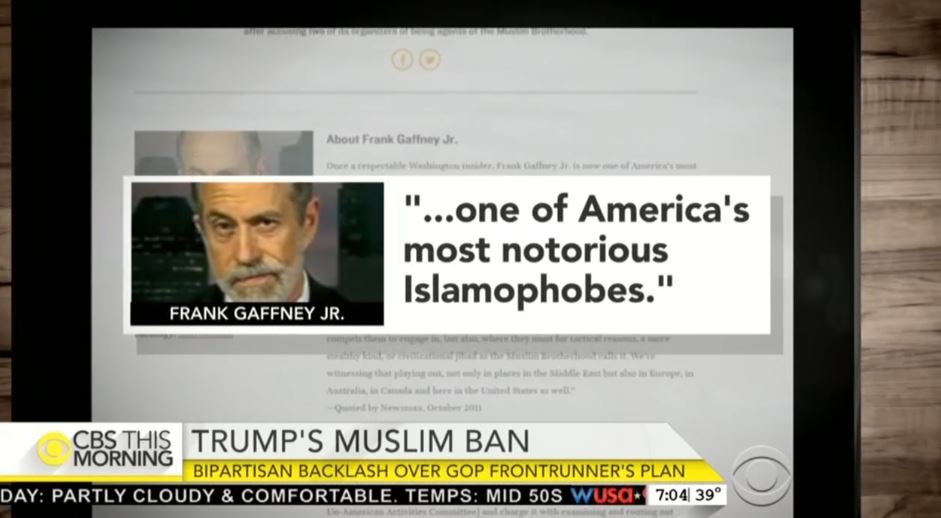 In 2013, the Media Research Center’s Mike Ciandella wrote about who the SPLC’s admitted double standards:

[SPLC Senior fellow Mark] Potok himself admitted [12] to the Utne Reader that there was an “element of hypocrisy” in branding conservative groups as hate groups while ignoring liberal groups.

"There was also, I feared, sometimes a little bit of an element of hypocrisy in the sense that for instance we wrote extensively about anti-abortion extremists who targeted individual doctors and their helpers by doing things like printing their names and home addresses and pictures of their children, and what car they drove to work, and that sort of thing. But at the same time we said nothing about groups like the Animal Liberation Front and the Earth Liberation Front, which are not right-wing groups in any sense, but employed exactly the same kind of tactics – that kind of targeting of individuals, holding them up for real, physical assault."

JEFF ZELENY: Well, first, the group. The group of itself, you know, has such an innocuous sounding name, the Center for Security Policy. It's actually run by a former official from the Reagan Defense Department, Frank Gaffney. And he is on the list of the Southern Poverty Law Center which tracks hate groups in America.

HUGH HEWITT: And the Center for Security Policies poll, which has been online since June of last year -- and by the way, I have to correct Jeff Zeleny. Frank Gaffney and the Center for Security Policy are not a hate group. The Southern Poverty Law Center almost got people killed two years ago, when they labeled the Family Research Council as a hate group.

(Both were appearing on CNN Tonight.)

A transcript of the December 8 CBS This Morning segment is below:

CHARLIE ROSE: Donald Trump is under fire from all sides after saying Muslims should be temporarily banned from entering the United States. Trump's comments threw the presidential race in turmoil.

NORAH O’DONNELL: Some of his supporters cheered the idea last night at a rally in South Carolina, but opponents from both sides of the aisle are hammering the Republican front runner. Major Garrett is in Washington with the outraged responses. Major, good morning. 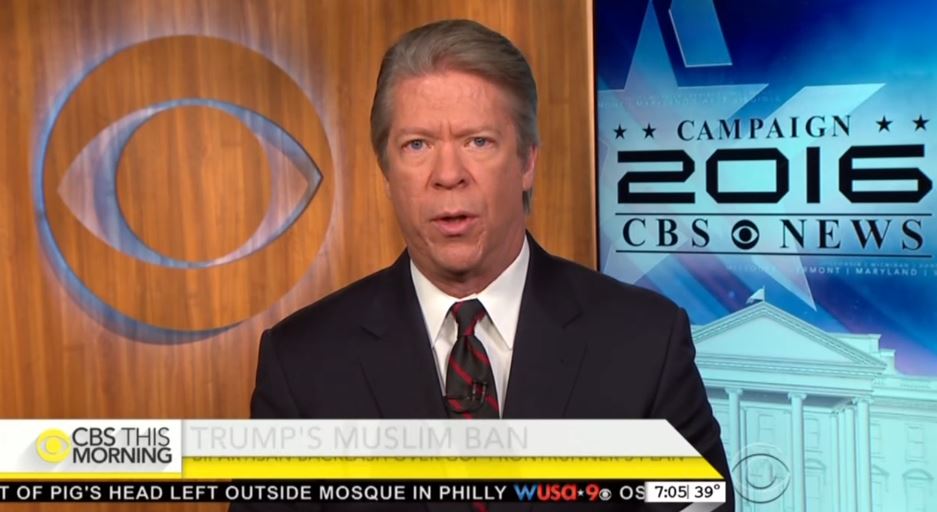 MAJOR GARRETT: Good morning. Trump's proposal, wrapped in fear, innuendo and division, runs counter to the Constitution and was too much for Dick Cheney the GOP chairs in New Hampshire and South Carolina, Trump’s Republican rivals and every Democrat seeking the White House.

DONALD TRUMP: Donald J. Trump is calling for a total and complete shutdown of Muslims entering the United States until our country's representatives can figure out what the hell is going on.

GARRETT: The Constitution protects freedom of religion and provides due process and equal protection under the law, rights that Trump’s proposal would trample. The GOP front runner says the country, quote, “has no choice.”

GARRETT: Trump cited polling data from the Center for Security Policy that he said indicated dangerous levels of anti–American sentiment among Muslims in the United States. The Southern Poverty Law Center, which tracks hate groups nationwide, described the head of the center, Frank Gaffney as, quote, "one of America's most notorious Islamophobes.” Campaigning in South Carolina, Trump offered no exceptions for Muslims serving in the U.S. military. Later, he made an excemption on Fox News.

TRUMP: No, they would come home. Anybody here stays.

DICK CHENEY: This whole notion that somehow we can say no more Muslims, just ban a whole religion, goes against everything we stand for and believe in.

CARLY FIORINIA: So, let’s see. We are now going to violate the constitutional rights of citizens because of Donald Trump, I don't think so.

GARRETT: Hillary Clinton call Trump's idea reprehensible. Bernie Sanders said it was racist. Martin O’Malley said Trump is now campaigning as a fascist demagogue. And the Council on American Islamic Relations said, quote, “Trump sounds more like the leader of a lynch mob than the leader of the United States of America.” Charlie?