Good Morning America reporter Jon Karl on Thursday marveled that Republicans would dare “defy” Barack Obama on letting Syrian refugees into the country. ABC censored the news that just 28 percent of Americans support the current refugee program. Instead, Karl announced, “The House is expected to defy the President today by voting to temporarily prevent the administration from allowing more Syrian refugees to come into the country.”

Karl then tried to spin Senator Ted Cruz as a hypocrite, playing a 2014 clip of the Republican saying, “We have welcomed refugees that — the tired, huddled masses for centuries. We should continue to do so.”

Fifty-three percent of U.S. adults in the survey, conducted in the days immediately following the attacks, say the nation should not continue a program to resettle up to 10,000 Syrian refugees. Just 28 percent would keep the program with the screening process as it now exists, while 11 percent said they would favor a limited program to accept only Syrian Christians while excluding Muslims, a proposal Obama has dismissed as “shameful” and un-American. 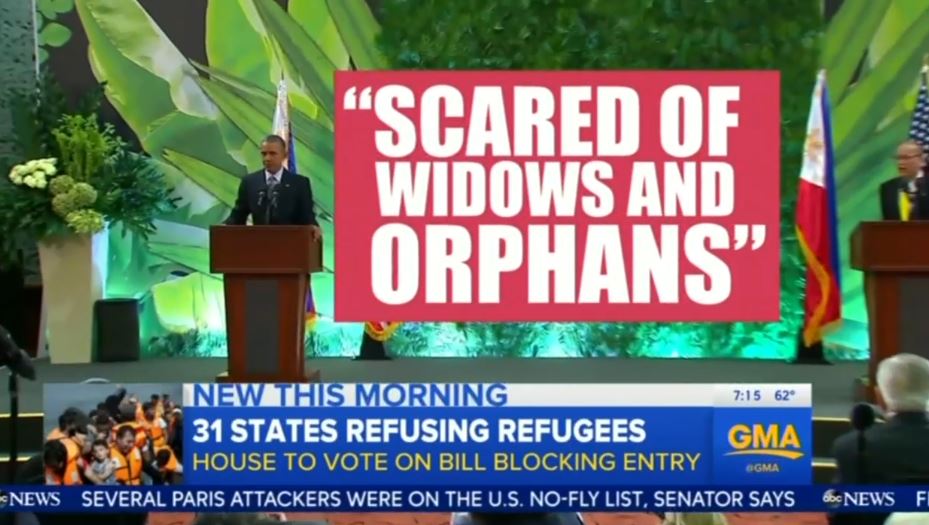 In contrast, during the 9am hour of NBC’s Today, Natalie Morales actually noted, “And a new NBC News/SurveyMonkey poll shows that 56 percent of the American public disapprove of allowing more Syrian refugees here into this country.” (The journalists did not mention this in the 7 or 8am hour of the program.) 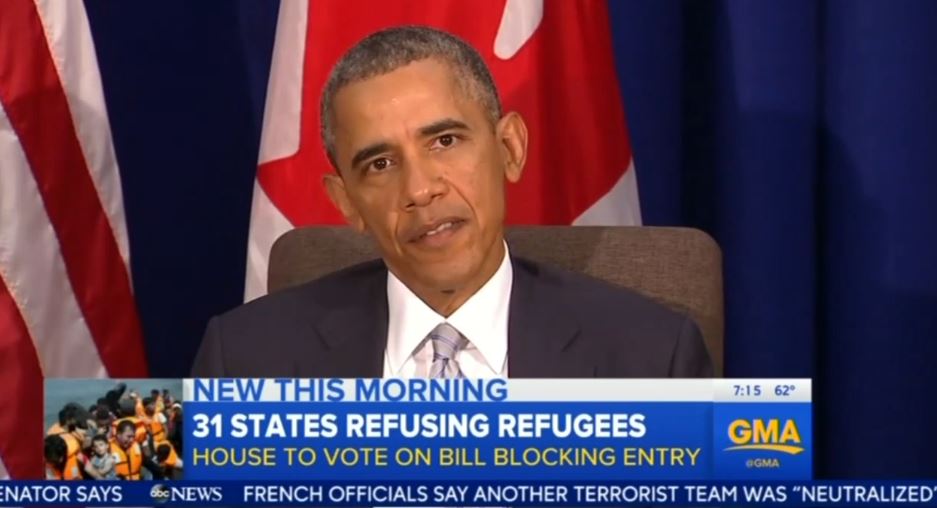 On CBS This Morning, Gayle King observed, “Most Americans are against the president's plan to resettle 10,000 Syrians. Fifty three percent in a new poll say they oppose it. Twenty eight percent say the program should be kept as it is.”

Another point avoided by ABC, Obama in 2011 took an action similar to what congressional Republicans are advocating. According to The Federalist:

Although the Obama administration currently refuses to temporarily pause its Syrian refugee resettlement program in the United States, the State Department in 2011 stopped processing Iraq refugee requests for six months after the Federal Bureau of Investigation uncovered evidence that several dozen terrorists from Iraq had infiltrated the United States via the refugee program.

A transcript of the November 19 segment is below:

GEORGE STEPHANOPOULOS: We’re going to move on now to that political backlash against Syrian refugees settling here in the United States. House is going to vote on a bill that would pause the program until the screaming process is beefed up. The President promising to veto it. And ABC’s Jon Karl at the White House with the latest. Good morning, Jon. 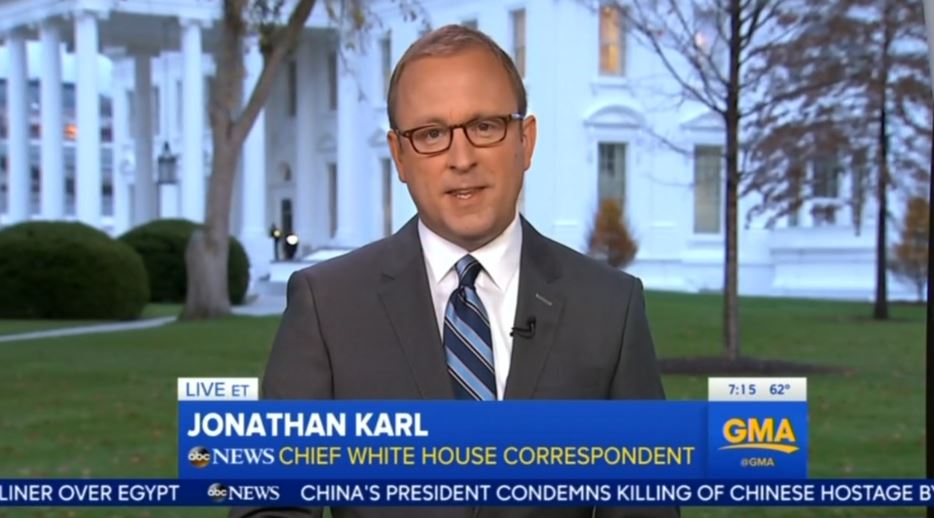 JON KARL: Good morning, George. And the House is expected to defy the President today by voting to temporarily prevent the administration from allowing more Syrian refugees to come into the country. Just days after one Paris was suspected of pretending to be a refugee using this doctored Syrian passport, Congress is voting to temporarily keep all Syrian refugees out of the U.S.

SPEAKER OF THE HOUSE PAUL RYAN: We can be compassionate and we can also be safe. 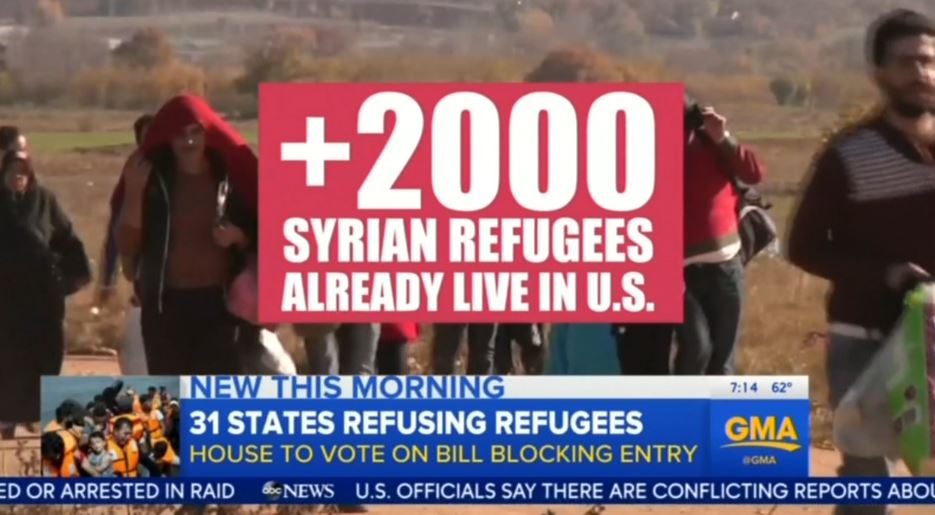 KARL: Congress wants the FBI not only to run background checks on all refugees, a process that already takes up to two years, but to certify that each Syrian is not a threat. One Syrian refugee family bound for the U.S., Wednesday, after three years of waiting was rerouted to Connecticut after Indiana's governor refused to let them in.

DAN MALLOY (D-Connecticut): I think they're happy to be in a place that at least —  at least the governor wants them to be in.

KARL: More than 2,000 Syrian refugees already live in the U.S. None have any known ties to terrorism, but now 31 governors say they won't accept more. Overseas, President Obama slammed Republicans for stoking fear saying they're, quote, “scared of widows and orphans.”

BARACK OBAMA: After the initial spasm of rhetoric, people settle down, take a look at the facts and we'll be able to proceed.

TED CRUZ: Mr. President, come back and insult me to my face. Let's have a debate on Syrian refugees right now.

KARL: Cruz is now proposing banning all Muslim refugees from Syria. But listen to what he said just last year.

CRUZ: We have welcomed refugees that — the tired, huddled masses for centuries. That's been the history of the United States. We should continue to do so.

STEPHANOPOULOS: And, Jon, the President and Congress both digging in hard right here. Could this lead to another government shutdown?

KARL: Well, it sure could because right now the question is whether or not to have a pause but government funding runs out at December — on December 11th and Republicans are willing to push on this, potentially to say that they will not fund this program and we'll see what happens to the President's veto threat at that point.