MSNBC is the network where ex-host Martin Bashir suggested that someone defecate and urinate on Sarah Palin. Yet, the suddenly sensitive Joy Reid on Wednesday warned viewers that she was about to feature someone saying the word "Redskins," what she deemed to be a "racial slur." [See video below. MP3 audio here.']

Hours after the U.S. Patent and Trademark office had cancelled the Washington Redskins trademark registration, Reid played a clip of Senator Harry Reid attacking the team. The host fretted, "And I just warn people, he does use the name of the team. So, I'm just going to warn you guys about that in advance."

Ms. Reid huffed that the word Redskins is "a racial slur I won't say here."

MSNBC journalists weren't so delicate when Bashir, on November 15, 2013, recounted how one slave in the 1700s was forced to "s-h-i-t" in another slave's mouth. The anchor suggested Palin would be an "outstanding candidate" to have someone do the same to her.

On April 13, 2009, then MSNBC-host David Shuster mocked the Tea Party as "teabaggers" and made several sexual and vulgar jokes.

Clearly, the journalists at MSNBC have an odd standard of what is acceptable and what isn't.

A partial transcript of the June 18 segment is below: 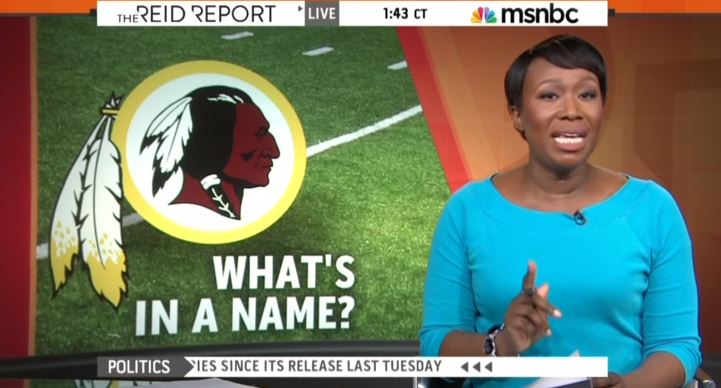 JOY REID: But today, American football is making major headlines. The U.S. Patent and Trademark announced today that it's canceling the trademark registration of Washington D.C.'s professional football team. Team owner Daniel Snyder maintains that the name of the team, a racial slur I won't say here, is meant to be respectful of native American heritage and football tradition.

REID: Speaking of revenue, Senator Harry Reid made an actually interesting case on the floor of the Senate, continuing to talk back to Dan Snyder. And I just warn people, he does use the name of the team. So, I'm just going to warn you guys about that in advance. So, Let's listen to Senator Harry Reid. An interesting argument.

HARRY REID: As I understand the law, the presiding officer wants to use the name Redskins for a church, he can do that. There's no trademark anymore for the Redskins.