[UPDATE: After the MRC's story on this, ABC News has apologized and pledged not to use the footage again.] According to Good Morning America's Linzie Janis, a CEO who made a donation in opposition to gay marriage is the same as the hateful members of the Westboro Baptist Church. On Friday, Janis reported on Brendan Eich, the former head of the tech company Mozilla. Eich was ousted after liberal groups found out that in 2008 he made a $1000 donation to support Proposition 8 in California. 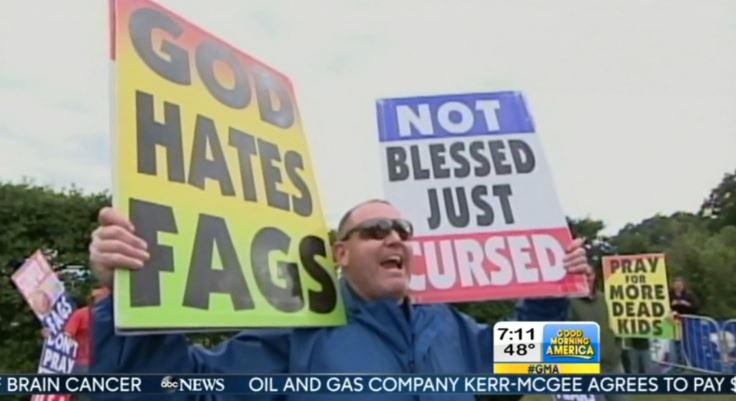 Eich was the CEO of Mozilla, which produces the web browser Firefox. Earlier this week, the dating website OKCupid launched a boycott, something Janis touted as a "game changer."

Janis offered no voices opposing to what occured, instead she featured business writer Jillian D'onfro to tout, "So for [OKCupid] to take that stand and say, 'hey, we don't want you using Firefox,' that was big and that got a lot of attention."

Offering no hint of criticism, she marveled, "..It's remarkable how one company's online popularity here, essentially, gave it the clout to force out another company's CEO."

A transcript of the April 4 GMA segment is below:

AMY ROBACH: Well, now to the CEO of a big name tech organization forced to step down. Mozilla,  maker of the popular Firefox web browser, out of a job after over his stance on gay marriage.  ABC's Linzie Janis has the story. 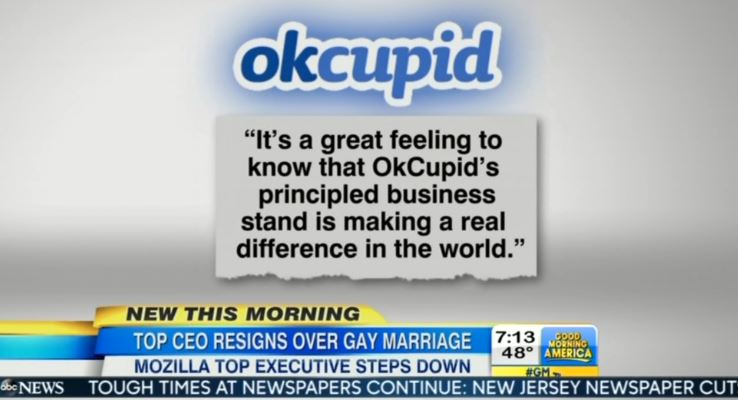 LINZIE JANIS: Within 24 hours of Brendan Eich's promotion to CEO of Mozilla last week, open rebellion. Employees publicly criticizing a 2008 donation he made to pass Prop 8, California's anti-gay marriage bill that was later overturned by the U.S. Supreme Court. [On-Screen pictures of Westboro Baptist protesters with "God Hates Fags signs.] One of them tweeting "I've waited too long to say this. I'm an employee of Mozilla and I'm asking Brendan Eich to step down as CEO." At first, Eich protested right back, telling tech news service CNET on Tuesday "I don't think it's good for my integrity or Mozilla's integrity to be pressured into changing a position." But then, a powerful game changer. This week online dating site OkCupid launching a digital boycott, blocking access to millions of customers who tried to logon to the site using Mozilla's popular web browser Firefox.

JILLIAN D'ONFRO: It was a very powerful move for OKCupid and pretty unexpected because of their, I think, three billion monthly page views 12 percent of that comes from Firefox. So for them to take that stand and say, "hey, we don't want you using Firefox," that was big and that got a lot of attention.

JANIS: Eich appeared to bow under the pressure, Thursday, handing in his resignation and saying "Our mission is bigger than any one of us and under the present circumstances I cannot be an effective leader." While he didn't address the OkCupid boycott directly, the online dating site fees triumphant telling ABC News overnight "it's a great feeling to know that OkCupid's principled business stand is making a real difference in the world." Well, Mozilla has apologized to its users saying it didn't move fast enough to engage with people once the controversy started. Amy, George and Lara, it's remarkable how one company's online popularity here, essentially, gave it the clout to force out another company's CEO.