The Obama-pleasing journalists at Good Morning America on Thursday managed to actually criticize the President. However, the critique was not over the health care law or excess spending. It was a complaint issued by a fellow liberal on the issue of grammar. Co-anchor George Stephanopoulos began by praising Obama, gushing, "He first skyrocketed to the national stage on the strength of his eloquent speeches." According to Stephanopoulos, the President has now been accused of "talking down to his audience." [See video below. MP3 audio here.]

Ron Claiborne explained, "It turns out Samuel L. Jackson, the maestro of the on-screen F-bomb has" noticed Obama's use of slang in speeches. Claiborne added, "[Jackson is] filing a grammatical grievance against the President." The journalist highlighted other presidents who have done such thing, including Bill Clinton and George W. Bush. However, he skipped one particular 2016 contender, Hillary Clinton.

Claiborne featured a clip of Bush enthusing, "Thank you all for comin." No mention was made of Mrs. Clinton's cringe-inducing faux accent when she told an African American audience in 2008, "I don't feel noways tired. I come too far from where I started from."

According to Jackson, Obama should "be a leader. Be [expletive] presidential." Jackson asserted, "When I'm out presenting myself to the world as me, I [expletive] conjugate."

A transcript of the September 26 segment is below: 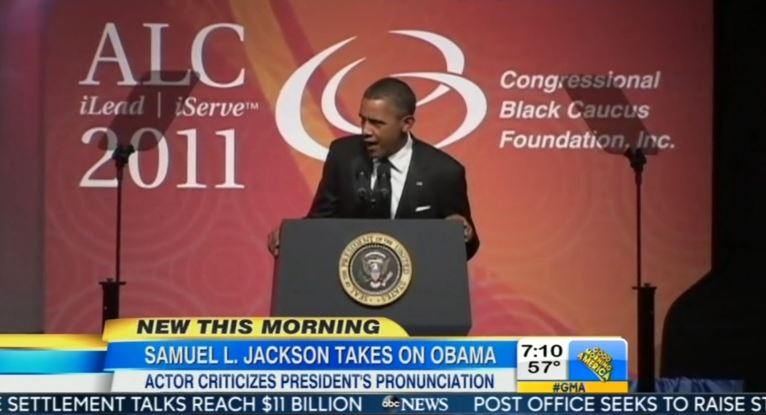 GEORGE STEPHANOPOULOS: Now to some friendly fire for President Obama. He first skyrocketed to the national stage on the strength of his eloquent speeches. But now, a famous supporter is taking him on for talking down to his audiences. ABC's Ron Claiborne is here with more on that. Good morning, Ron.

RON CLAIBORNE: Good morning, to you, George. That criticism is coming from actor Samuel L. Jackson who accuses President Obama of effecting a "just regular folks" way of speaking to people that Jackson says, is not only fake, but unpresidential.

CLAIBORNE: You've heard it. The President getting all folksy, talking to the people. Going to suddenly becomes gonna. .

CLAIBORNE: Those Gs at the end of gerund, they just kind of disappear.

OBAMA: Dr. Lowery, I don't think he minds me telling that he turns 90 in a couple weeks. He's been causing a ruckus for about 89 of those years. 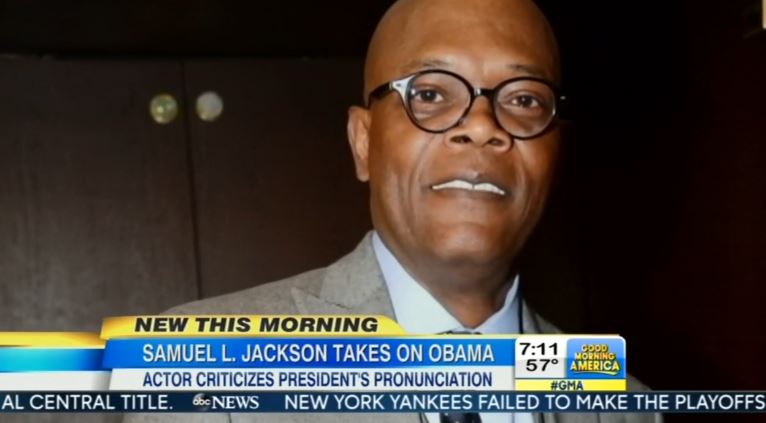 CLAIBORNE: It turns out Samuel L. Jackson, the maestro of the on-screen F-bomb, has taken notice. And this morning, he's filing a grammatical grievance against the President. In the new issue of Playboy magazine, Jackson talks about what he thinks of educated people, like our Harvard-educated President, trying to sound like average Joes. Jackson says, "I say stop trying to relate. Be a leader. Be expletive presidential."

OBAMA: I love you! God bless you!

CLAIBORNE: Of course, tailoring your accent and slang to your audience, is as much a political a tradition as kissing babies. Remember –

GEORGE W. BUSH: Thank you all for comin'.

CLAIBORNE: And then there was Mitt Romney's awkward efforts to talk southern.

MITT ROMNEY: I got started right this morning with a biscuit and some cheesy grits. I'll tell you.

CLAIBORNE: Even a genuine southerner, like Bill Clinton, would lay on the molasses when he ventured south of the Mason-Dixon line.

BILL CLINTON: She said, when my boy goes to school, and they ask him what does your momma do for a living, he can give an answer.

JAMAL SIMMONS (Democratic consultant): The President speaking at the United Nations in one – in one form, he'll speak in front of a church audience in another form.

CLAIBORNE: Jackson went on to say that while he sprinkles his own language with ain'ts, "when I'm out presenting myself to the world as me, I expletive conjugate." And on Twitter, Jackson is apparently widely known as the grammar police for deriding and correcting other people's syntactically sloppy tweets, which a lot of people may find ironic given that his own tweets are heavily laden with colorful vernacular. And yes, this being Samuel L. Jackson, the occasional expletive.

STEPHANOPOULOS: You had fun with this one.

ROBERTS: That was a well written tag.