Although most of the evening newscasts on Tuesday and morning shows on Wednesday ignored Barack Obama's plan for a "grand bargain," ABC's Good Morning America covered the latest budget move and wondered why Republicans would "reject a tax cut for corporations."

Reporter Jim Avila offered an incomplete description of the President's latest plan, citing personal animus on the part of the Republicans: "When would Republicans reject a tax cut for corporations? Answer, when it's proposed by this man, the President, who says he wants to break the capital logjam, by agreeing to lower taxes for businesses." Obama's proposal would lower the corporate income rate from 35 percent to 28 percent. Yet, as the Business Insider and the Wall Street Journal pointed out, it's not much of a deal. 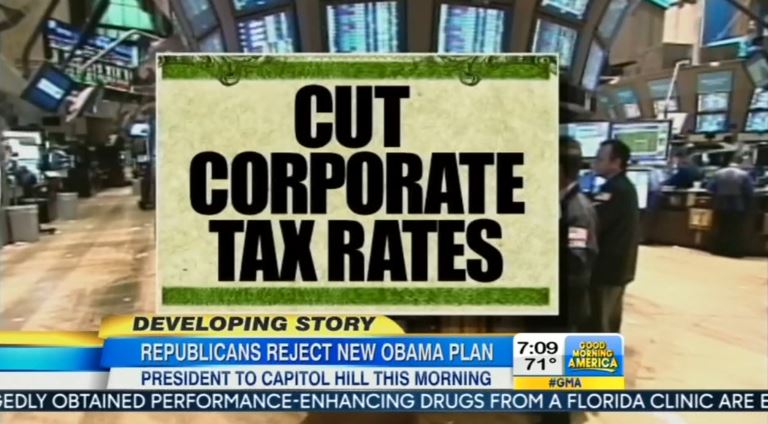 Yes, Obama is proposing a big cut in the corporate income tax rate, from 35% to 28%. But the White House is also saying corporate tax reform should be revenue-neutral in the long term and actually raise revenue in its first few years, which would mean a big expansion of the corporate tax base.

While most everyone nominally favors "lower rates, broader base," the particular way you broaden the base is a major point of contention. And the President's signals, though vague, do not line up with conservative priorities on the corporate tax.

According to the Hill, "To pay for the new spending, Obama proposed a one-time 'transition fee' on the hundreds of billions of dollars that companies are currently holding or earning overseas." 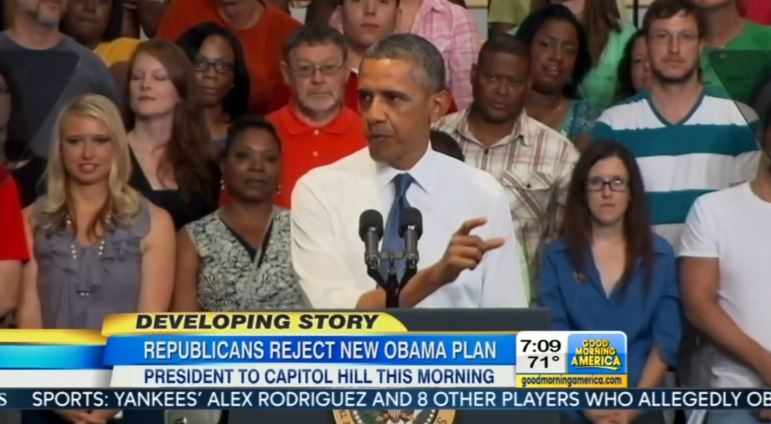 The Wall Street Journal explained, "A White House press release clarified that the President would also like to raise taxes on individuals, not just businesses, while allowing federal spending to rise still higher."

Avila did allow GOP criticism when he mentioned the President's plan for "closing multi-billion dollar loopholes":

JIM AVILA: But instead of giving that new revenue back to individual taxpayers, as Republicans demand, the President wants to spend it on government programs to train workers, build new bridges and roads, he says to put the middle class back to work.

Over on CBS This Morning, Charlie Rose summarized, "Yesterday, the President offered the GOP a cut in the corporate tax rate, as long as the money is used to create jobs."

JOHN DICKERSON: Now, we're in a little mini-grand bargain, and what that is the President says, I will – I will support cuts in the corporate tax rate if we use that money to pay for infrastructure. The idea is to focus Republicans on policies they have supported in the past to try to make a clear political break between what the President supports and Republicans do – to put pressure on Republicans.

He then parroted the President: "The White House says, but wait a minute. We're giving you some tax breaks on the corporate side. Please take yes for an answer."

The three evening newscasts, World News, the CBS Evening News and Nightly News skipped Obama's latest offer. Even though they found no time for details of the proposal, World News offered a report on bringing your dog to work and the Evening News looked back at the greatest moments from TV's early era.

A transcript of the July 31 GMA segment follows:

GEORGE STEPHANOPOULOS: Now, to President Obama making a rare visit to Capitol Hill today to sell his latest grand bargain offer on the budget. Cuts in corporate taxes in return for more investments to create jobs. ABC's Jim Avila is at the White House this morning. And Jim, this looks like a hard sell with Republicans in Congress.

JIM AVILA: Yes, it does, George. Good morning. The President, as you say, on the way up to Capitol Hill. But he's scheduled to talk to only Democrats. And that grand bargain he's talking about, well, Republicans say it's no bargain at all. When would Republicans reject a tax cut for corporations? Answer, when it's proposed by this man, the President, who says he wants to break the capital logjam, by agreeing to lower taxes for businesses.

BARACK OBAMA: So, I'm going to try offering something that serious people in both parties should be able to support. A deal that simplifies the tax code for our businesses, and creates good jobs with good wages for middle-class folks who work at those businesses.

AVILA: And that is the rub. President Obama's proposal would cut corporate tax rates and, perhaps, even collect more money by closing multi-billion dollar loopholes. But instead of giving that new revenue back to individual taxpayers, as Republicans demand, the President wants to spend it on government programs to train workers, build new bridges and roads, he says to put the middle class back to work. That is a no-go for the GOP.