Despite billing his interview with Barack Obama as "no holds barred," Good Morning America's George Stephanopoulos on Wednesday skipped several tough questions and only gently quizzed the President on others. On the issue of the closing of White House tours due to sequester cuts, the former Democratic operative delicately wondered, "Was canceling them really necessary?...So, no reconsideration?" [See video below. MP3 audio here.]

Other than this brief query, Stephanopoulos showed no interest in whether the administration hyped the sequester cuts to an over-the-top level. (Perhaps, this could be because ABC did the same thing. GMA's Josh Elliott on March 1 pronounced that "armageddon" had arrived, leading to the "vaporizing" of jobs and criminals walking free.) Instead, Stephanopoulos ridiculously requested Obama to weigh in on the dangers of an American pope: "...There seems to be some concern among Catholics there shouldn't be an American pope because that pope would be too tied to the U.S. government. What do think of that?"

Stephanopoulos seemed to willfully ignore the anger some among American Catholics feel after Obama mandated that employers must cover birth control. The journalist bizarrely added that an American pope wouldn't "take orders from you."

It was left to the President himself to jokingly highlight Catholic opposition to his policies: "I don't know if you have checked lately, but the Conference of Catholic Bishops don't seem to be taking orders from me." 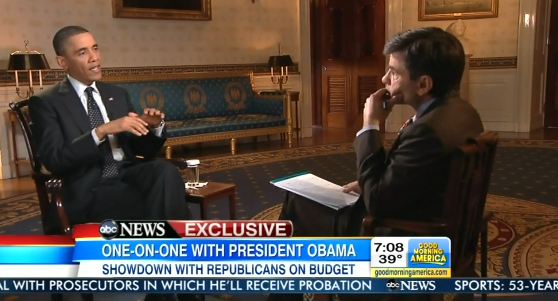 Another issue that Stephanopoulos ignored is Organizing for Action (OFA), Obama's newly renamed campaign group. On March 8, NBC and CBS covered the proposed scheme that $500,000 OFA donations would guarantee access to the White House. ABC skipped the story. Not surprisingly, Stephanopoulos didn't bring it up on Wednesday.

On the issue of dealing with Congressional Republicans, Stephanopoulos speculated as to whether Obama would "overcome Republican opposition to the new taxes by going around GOP leaders or rolling right over them." (Those are the only two options?)

Finally, on this issue, Stephanopoulos at least wondered, "Senate Republicans say they're going to need to see a lot more entitlement reform from you before they can sign on to any new revenues like putting, raising the Medicare eligibility age back on the table. Is that back on the table?"

Stephanopoulos has conducted several fawning interviews with Obama since he became president. For more on those, go here.

A transcript of the March 13 segment, which aired at 7:06am ET, follows:

GEORGE STEPHANOPOULOS: An ABC news exclusive: Our no-holds barred interview with President Obama at the White House. Not backing down on the budget fight. Tough words for North Korea and China and are those White House tours coming back? 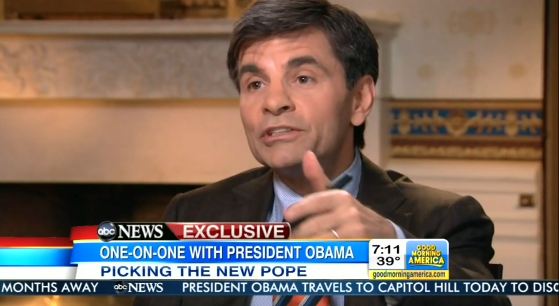 STEPHANOPOULOS: But now to my exclusive interview with President Obama. We sat down yesterday afternoon. A packed day filled with news on the Pope, North Korea and cyber attacks. And with the President just back from a budget meeting on Capitol Hill, I began by asking how he would overcome Republican opposition to the new taxes by going around GOP leaders or rolling right over them.

BARACK OBAMA: I don’t think it's to break or go around them. I think it is to identify what I call the common-sense caucus, which says– we can do sensible deficit reduction with a combination of entitlement reform, some judicious spending cuts, closing some tax loopholes that nobody really defends on their own and that's what I've been talking about for the last two years.

STEPHANOPOULOS: That commonsense caucus on the Republican side, Lindsey Graham, Kelly Ayotte, other Senate Republicans say they're going to need to see a lot more entitlement reform from you before they can sign on to any new revenues like putting, raising the Medicare eligibility age back on the table. Is that back on the table?

OBAMA: Well, one of things that– you know, I've discovered in some of these dinners, which has been– useful, is that people don't always know what I've actually proposed. And– it's a lot easier to have a conversation when there's something specific.

STEPHANOPOULOS: But even the ones who've seen your plans say they need to see more.

OBAMA: Well, I understand. Which is why, at some point, I think I take myself out of this. Right now, what I'm trying to do is create an atmosphere where Democrats and Republicans can go ahead, get together, and try to get something done. But, ultimately, it may be that the differences are just too wide. If their position is we can't do any revenue, or we can only do revenue if we gut Medicare or we gut Social Security or gut Medicaid, if that's the position, then we're probably not going to be able to get a deal.

STEPHANOPOULOS: And he says he's challenging you to come forward with a budget that reaches balance. Are you going to do that?

OBAMA: No. We're not gonna balance the budget in ten years because if you look at what Paul Ryan does to balance the budget, it means that you have to voucherize Medicare; you have to slash deeply– into programs like Medicaid. My goal isn't to chase a balanced budget just for the sake of balance. My goal is how do we grow the economy, put people back to work and if we do that, we're going to be bringing in more revenue. If we've controlled spending and we've got a smart entitlement package, then potentially what you have is balance, but it's not balance on the backs of, you know, the poor, the elderly, students who need student loans, families who've got disabled kids.

STEPHANOPOULOS: You've been taking a lot of heat for this cancellation of the White House tours. I guess the Secret Service says it's costs about $74,000 a week. Was canceling them really necessary?

OBAMA: You know, I have to say this was not– a decision that went up to the White House. But– what the Secret Service explained to us was that they're gonna have to furlough some folks. What furloughs mean is– is that people lose a day of work and a day of pay. And, you know, the question for them is, you know, how deeply do they have to furlough their staff and is it worth it to make sure that we've got White House tours that means that you got a whole bunch of families who are depending on a paycheck who suddenly are seeing–

STEPHANOPOULOS: So, no reconsideration?

OBAMA: –a five or ten percent reduction in their pay. Well, what I'm asking them is are there ways, for example, for us to accommodate school groups, you know, who may have traveled here with some bake sales, can we make sure that kids potentially can still come to tour?

OBAMA: They– they probably can't, but we don't like margin of error, right, when it comes to–

STEPHANOPOULOS: It's that close?

OBAMA: Well, and I don't– it's not that close. Now, what we've done is we've made sure that we've got defensive measures to prevent– any attacks on the homeland. And we're not anticipating any of that.

STEPHANOPOULOS: Let me stay in the region, because James Clapper also today talked about cyber attacks. Put that at the top of his list of threats to the United States. A couple weeks ago– the chairman of the House Intelligence Committee– Mike Rogers, said that we are at war with China. Because of their cyber espionage, they're winning that war. And their government and military is behind it. Do you believe that?

OBAMA: Well, I think– you always have to be careful war analogies. What– is absolutely true is that we have seen– a steady ramping up of cyber security threats. Some are state sponsored. Some are just sponsored by criminals.

STEPHANOPOULOS: But some are state sponsored?

OBAMA: Absolutely, and this is why I've taken some very aggressive executive actions but we need Congress to act. We made very clear to China and some other state actors that, you know, we expect them to follow international norms and abide by international rules and we'll have some pretty tough talk with them.

STEPHANOPOULOS: One more question. While we're here a lot of eyes on Rome as the Cardinals prepare to pick a new pope. And for the first time some American cardinals on the list. What I wanted to ask you about there seems to be some concern among Catholics there shouldn't be an American pope because that pope would be too tied to the U.S. government. What do think of that?

OBAMA: It seems to me an American pope would preside just as effectively as a polish pope or an Italian pope or a Guatemalan pope.

STEPHANOPOULOS: And not take orders from you.

OBAMA: I don't know if you have checked lately, but the Conference of Catholic Bishops don't seem to be taking orders from me. My hope is based on what I know about the Catholic Church and the terrific work that they've done around the world and certainly in this country, you know, helping those would are less fortunate is that you have a Pope who sustains and maintains what I consider the central message of the gospel. We treat everybody as children of god and that we love them the way Jesus Christ taught us to love them.

STEPHANOPOULOS: Well, I'll be watching for the white smoke. Mr. President, thank you.

STEPHANOPOULOS: And you can see more of my interview with President Obama tonight on Nightline.

ROBIN ROBERTS: He was very direct.

STEPHANOPOULOS: He was! And maybe those White House tours can be coming back, at least for kids.