MSNBC's Chris Matthews: Is 'Great' Obama About to Equal Presidents on Mount Rushmore?

Although every holiday may seem like Obama Day to Chris Matthews, the MSNBC host used the date often devoted to Lincoln and Washington as an excuse to wonder if the current President is headed to Mount Rushmore. On President's Day, Matthews thrilled, "Is Barack Obama going for it? Is he set on becoming one of the great presidents in history?" [See video below. MP3 audio here.]

The cable anchor, who famously declared that Obama caused a "thrill going up my leg," first declared, "I'm not talking about Mt. Rushmore but perhaps the level right below it." He later went back on this and fantasized about the President watching him: "If [Obama] were hearing us talking about him maybe mounting Mount Rushmore, getting up there with the great presidents...what would he be thinking? 'That's exactly what I'm doing?'"

So cocky about Obama's great success, Mathews is already imagining a third Democratic term, wondering if the President is "aiming toward the second goal of his greatness, getting the Democrat to replace him, Hillary or Joe Biden."

Although it would seem hard for Matthews to go even deeper into the tank, the host seems to be edging towards that direction. Just last week, he said of the deeply liberal State of the Union address: "There's nothing lefty in here. What's the left-wing part? Objectively, was there a left wing piece to this speech last night? I mean, truly left? I didn't see it."

[Thanks to NB's Noel Sheppard for the video.]

A transcript of the February 18 show open is below: 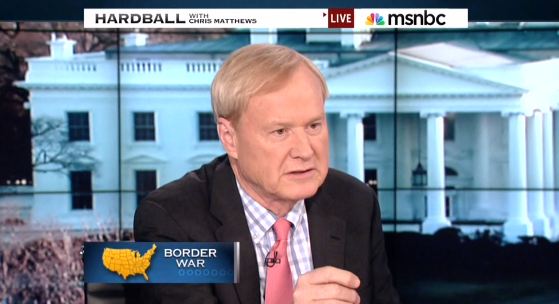 CHRIS MATTHEWS: Is Barack Obama going for it? Is he set on becoming one of the great presidents in history? I'm not talking about Mount Rushmore but perhaps the level right below it. I'm talking, to use his word, transformational. And is he using the country's historic demographic shift to do it? Can he combine the new American power of Hispanics and other minorities with the immediate aspirations of women to lob himself into the highest level of presidential greatness? Can he bring on an era of Democratic, even liberal dominance, for years to come? This is what his adversaries fear. They look at his working of the gun safety crusade, his positioning on immigration reform, his distancing himself from the triumphing over-- even triumphing over the hard often bizarre right wing of this country to do it.

Are they on to something? Could this president be the president of our time? Tonight we examine on President's Day just where Barack Obama intends to go, where he intends to be once he, too, joins the pages of history and the lists of American presidents. I've got two MSNBC political analysts to answer the question. Howard Fineman is editorial director of the Huffington Post and Joy Reid is managing editor of the Grio. First of all, I want to ask you both about these numbers here. These are numbers for the next election, 2014. Right now, the Democrats are about 17 votes shy of taking over the House of Representatives. They're about five votes ahead of where they have to be to hold the Senate. Can they do it? Can Barack Obama leave office having won back the United States congress and then, of course, aiming toward the second goal of his greatness, getting the Democrat to replace him, Hillary or Joe Biden.

MATTHEWS: If he were hearing us talking about him maybe mounting Mount Rushmore, getting up there with the great presidents, secretly, not what he would say to other people, what would he be thinking? That's exactly what I'm doing?