For the second day in a row, the CBS Evening News on Wednesday avoided any coverage of a new memo revealing that the Obama administration asserts the power to legally strike terrorists, even if they're American citizens. Of the combined three nightly newscasts on Wednesday and three morning shows on Thursday, four of them found time to cover the story.

In contrast to the Evening News, Diane Sawyer opened World News by highlighting the "secret war." Sawyer fretted, "Those escalating drone attacks in the air and the consequences on the ground. And the question-- is it making the United States safer?" Reporter Martha Raddatz explained that Obama's drone policy "has grown 700 percent under the Obama administration." Considering how hyperbolically journalists obsessed over George W. Bush's acts of "torture," one would think the Evening News would be interested in covering Obama's drone policy. 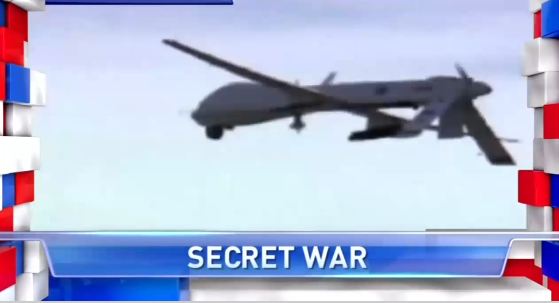 In addition to Wednesday's World News, NBC's Nightly News tangentially covered drones. But even as Brian Williams admitted the controversy "continues to make headlines," he segued into a story on use of drones in America for law enforcement and wildlife studies. There was no discussion of Obama's policy.

On Thursday, Good Morning America covered the memo, including previewing CIA nominee John Brennan's role and his confirmation hearings, twice. Jon Karl predicted that the February 7 hearings will be the "most thorough discussion we have ever seen about this highly secretive, but absolutely central component of the President's war on terror."

Perhaps this will prompt the Evening News to cover the story. 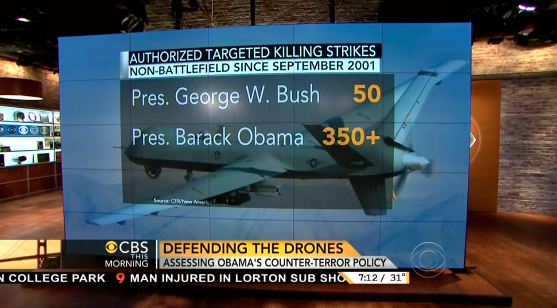 On CBS This Morning, Bill Plante pointed out that even Demorats are raising concerns about the drone strikes:

BILL PLANTE: Democrats are equally concerned. They want to know Brennan's role in the White House-approved drone attacks on terrorists who are American citizens. On Wednesday Senator Ron Wyden threatened to pull out all the stops to get the Justice Department legal opinion which the president leased to the committee but which will not be made public.

NBC's Today also provided a full report on the drones.

A partial transcript of the February 7 World News segment follows: 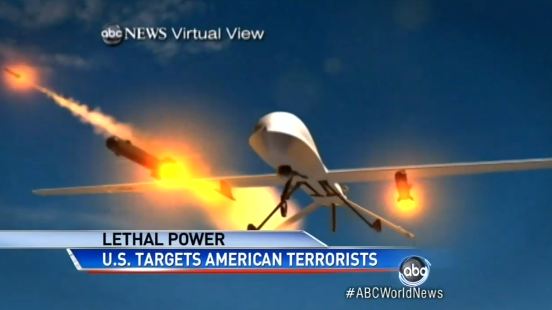 DIANE SAWYER: America's secret war. Martha Raddatz reporting in on a hidden base of operations, escalating attacks from the sky and a controversy about to erupt tomorrow.

SAWYER: We begin with America's secret war. Those escalating drone attacks in the air and the consequences on the ground. And the question-- is it making the United States safer? ABC's chief global affairs correspondent Martha Raddatz tonight traveled to the Middle East and brings in this report.

RADDATZ: It is a secret war. And just today, in a sign of how pervasive and how hidden it is, the revelation that America has a secret base in Saudi Arabia, used to launch drones throughout the region, a tactic against terror which has grown 700 percent under the Obama administration. Whatever the benefit of the drone strikes, they have created enormous resentment among some here in the region, who view the strikes as another sign of American arrogance.